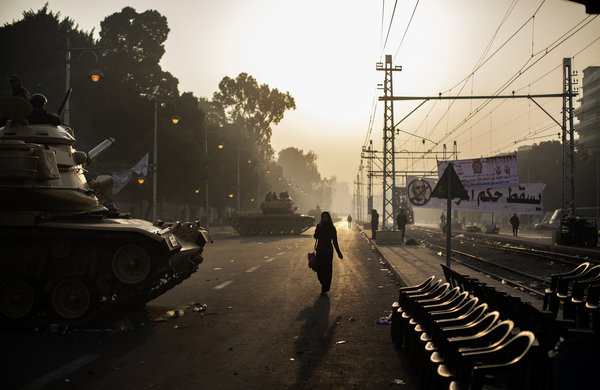 Two meetings will be held during the third round of national dialogue: in the first meeting, a committee of expertise chosen by Dr. Mohamed Selim al-Awa aims at discussing the suggested articles for amendment in the draft constitution delivered by the participants in the second round.

Third round of national dialogue
Two meetings will be held during the third round of national dialogue: in the first meeting, a committee of expertise chosen by Dr. Mohamed Selim al-Awa aims at discussing the suggested articles for amendment in the draft constitution delivered by the participants in the second round. Also, the members of this committee will determine the nomination measures which will be adopted by the political powers for suggesting their candidates to complete the membership of the Shura Council. These measures will then be presented to the president. The third meeting includes a number of political parties, national symbols and public figures. The participants will discuss the results the committee reached. [SIS, EGYNews (Arabic), 12/13/2012]

Armed Forces arrest powers confined to referendum, spokesperson says
The arrest powers that the president granted this week to the military only apply at polling sites on the days of the constitution referendum, Armed Forces spokesperson Ahmed Mohamed Ali told Turkish news agency Anadolu Thursday. The power to arrest civilians is “not absolute, but starts with the beginning of the referendum day and ends with it, and only in the polling stations,” he said. President Mohamed Morsy’s decree Sunday ordered the military to assist police forces in keeping security and protecting vital establishments until the result of the referendum is announced. [Egypt Independent, EGYNews (Arabic), 12/13/2012]

Attorney general releases damning account of protest detentions
Prosecutor General Talaat Abdallah on Thursday reversed a decision to transfer the East Cairo attorney general who was leading investigations into clashes between the president’s opponents and supporters outside the presidential palace. Abdallah ordered Attorney General Mostafa Khater’s transfer to Beni Suef Wednesday in “the interest of work” following Khater’s decision to release 137 suspects detained following protest clashes on 5 December for lack of evidence. Another 12 were also detained on charges of possessing firearms, Molotov cocktails and bladed weapons. Abdallah’s reversal perhaps came in response to a memorandum Khater sent to the Supreme Judicial Council Thursday leveling serious accusations of official corruption and asking to be reassigned to work as a judge rather than for the prosecution. [Egypt Independent, AP, DNE, Ahram (Arabic), AMAY (Arabic), 12/13/2012]

Egyptian Judges’ Club mulls response to transfer of Cairo district attorney
The Egyptian Judges’ Club – an unofficial body of Egypt’s judges – will hold an urgent general assembly meeting to decide how to respond to a decision by Egypt’s new prosecutor-general to transfer district attorney for East Cairo Moustafa Khater to the Upper Egyptian city of Beni Suef. The decision came after Khater ordered the release of protesters arrested following last week’s clashes between supporters and opponents of President Mohamed Morsi outside the presidential palace in Cairo. [Ahram Online, 12/12/2012]

Another prosecution body boycotts constitutional referendum
The Administrative Prosecution Club announced that its counselors would only supervise the referendum on the draft constitution scheduled for 15 and 22 December if the most recent constitutional declaration and all its results are cancelled. The head of the club, Abdallah Qandil, said in a statement that the club asked all prosecutions nationwide to provide the names of judges interested in supervising the referendum, and that a large majority refused to participate. There are 3,847 Administrative Prosecution Club members, according to available data in the club, and only 836 have expressed the desire to supervise the referendum, while 3,011 have rejected it, Qandil said. [Egypt Independent, 12/12/2012]

Rights groups warn of referendum fraud
Thirteen human rights organizations have warned fraud in the referendum on the new draft constitution, especially after the National Council for Human Rights said in a press conference on Wednesday that organizations interested in monitoring the referendum must obtain prior authorization from it. The organizations also denounced the council is playing the role of mentor for civil society organizations, and warned that the climate of the referendum does not inspire integrity. [Egypt Independent, DNE, 12/12/2012]

Egypt Political Crisis Threatens To Worsen Economy
Fear of stoking the street unrest over a disputed Islamist-oriented constitution led President Mohammed Morsi to suspend a package of tax hikes that were key to reducing that deficit – and his government may now have to renegotiate the loan deal that took more than a year to hammer out. While the government said it wants to delay the request for only a month, the IMF the mentioned no timeframe in its statement on Tuesday, saying only that it stands ready to "consult with the authorities on the resumption of discussions." President of the Middle East Rating and Investors Services (MERIS), Amr Hassanin, stated that Egypt’s decision to postpone acceptance of the IMF loan could lead to yet another downgrading in the country’s credit rating. [AP, DNE, 12/13/2012]

Manpower Ministry blacklists some Saudi and Libyan companies
The Manpower and Immigration Ministry has ordered local companies to stop contracting with Libyan construction and maintenance company Wadaq as of 9 December 2012, due to its failure to fulfill commitments to the ministry and to Egyptians who work abroad, minister Khaled al-Azhary said. The minister also blacklisted Saudi engineering consulting companies Fares al-Shamary, Nasser al-Shomar, Project Up Contracting and all their sponsors in the kingdom as of 9 December, because of alleged violations against contracted Egyptian workers. The companies did not respond to a notice from the Egyptian Labor Representation Office in Riyadh about this issue. [Egypt Independent, 12/13/2012]

Journalist’s funeral turns into protest against Brotherhood
Thousands of Sohag Governorate residents mourned photojournalist Al-Husseini Abu Deif Thursday during a funeral in his hometown. Abu Deif, was filming protests for privately-owned newspaper Al-Fagr when he was shot with birdshot after President Mohamed Morsy’s supporters attacked an opposition sit-in outside the presidential palace in Cairo on 5 December. Abu Deif’s parents and siblings said they hold Morsy and the Muslim Brotherhood responsible for his death. The funeral turned into a march against the president and the group. The official English-language website of the Muslim Brotherhood’s Freedom and Justice Party Wednesday blamed the National Salvation Front opposition coalition for the death of journalist. [Egypt Independent, Ahram Online, 12/13/2012]

Torture and detention at the hands of Brotherhood mob
On 5 December, a total of 49 people were captured, beaten and kept overnight in makeshift holding cells as their captors interrogated them about their affiliations and the reason for their presence in the vicinity of the fighting. But they were not arrested by police or military forces — according to numerous eyewitnesses and personal accounts, supported by video evidence, civilians affiliated with the ruling Muslim Brotherhood were the ones who kept them captive for hours under the eye of security forces. Human Rights Watch (HRW) released a statement Wednesday demanding Egypt’s public prosecutor investigate the detention and abuse of anti-Morsi protesters at the hand of Muslim Brotherhood members during last Wednesday’s clashes at the presidential palace. Tahrir Doctors’ Society, made up of doctors who actively support the revolution, also accused Freedom and Justice Party member, Hazem Farouk, of torturing citizens. [Egypt Independent, Ahram Online, DNE, 12/12/2012]