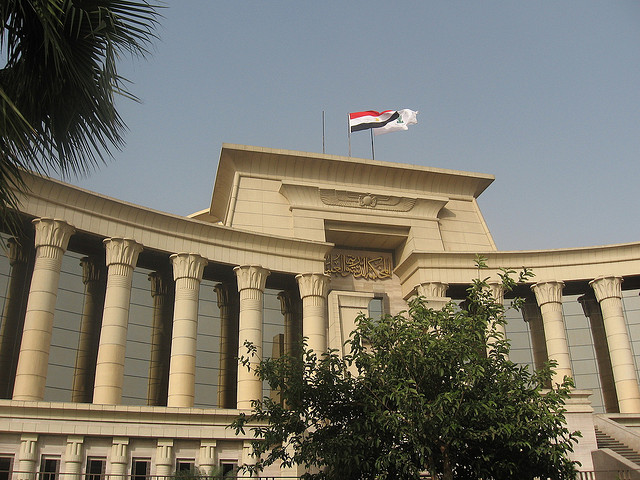 The Cairo Court of Appeals on Wednesday reinstated former Public Prosecutor Abdel Meguid Mahmoud to his post, annulling a decree by President Mohamed Morsi replacing him with Talaat Abdallah, according to Al Jazeera Mubasher Misr. The move sparked a wave of protests and violent clashes, particularly in front of Ettehadiya Palace in Cairo.

Morsi predicts House of Representatives elections in October
President Mohamed Morsi has predicted that elections for the House of Representatives will be held by October, with the first session of the lower house of Parliament beginning before the end of 2013. Elections were previously set to take place in stages starting April before a ruling by the Cairo Administrative Court delayed them, pending the draft election law’s review by the Supreme Constitutional Court. Morsi, who was meeting with members of the Egyptian community in Qatar on Tuesday, said the Shura Council, the upper house of Parliament, may finish the draft law on the House elections within two weeks and submit it to the SCC. Morsi estimated that review might take two and a half months, after which he would call elections. [Egypt Independent, Ahram Online, Reuters, 3/27/2013]

Shura Council passes law curbing protest rights
The Shura Council approved a draft law Tuesday that further restricts the right to demonstrate. The bill prohibits citizens from organizing protests that pose a risk to the nation’s security. To ensure this, organizers must submit a written notification to police three days in advance of the planned demonstration. The proposed law also stipulates that protesters must be 200 meters away from government, legislative and judicial buildings. Anyone found guilty of violating the law will be sentenced to hard labor in prison and fined at least LE50,000. The draft law has already come under fire from opposition groups who accuse President Mohamed Morsi of using the same oppressive tactics regularly employed by ex-leader Hosni Mubarak. [Egypt Independent, 3/26/2013]

Sources say Brotherhood seeks to unite Islamists against opposition
Sources close to Muslim Brotherhood claimed Tuesday that two emergency meetings are planned to unite Islamists ahead of government resolutions set to target opposition forces following clashes near the Moqattam Muslim Brotherhood headquarters. According to the unnamed sources, the discussions aim to unite factions and garner their support for President Mohamed Morsi ahead of the rumored announcement. The sources say Deputy Supreme Guide Khairat al-Shater has already hosted a meeting with the group’s Legal Body for Rights and Reform, which could mediate talks between the Brotherhood and Salafis. [Egypt Independent, 3/26/2013]

Egypt’s NSF indefinitely postpones its dialogue initiative
Egypt’s largest opposition coalition, the National Salvation Front (NSF), has indefinitely adjourned the first meeting of a planned series of roundtable discussions that were due to kick off on Monday, March 25, after two parties announced they would not take part. "The current situation in the country – including the latest spate of violence, subsequent reactions, as well as the ongoing protests by Islamists at Media Production City, do not allow a dialogue at the moment," Ahmed Fawzi, secretary general of the Egyptian Social Democratic Party (ESDP) and leading member in the NSF, told Ahram Online. [Ahram Online, 3/26/2013]

Court orders former prosecutor general reinstated, sparks debate
The Cairo Court of Appeals on Wednesday reinstated former Public Prosecutor Abdel Meguid Mahmoud to his post, annulling a decree by President Mohamed Morsi replacing him with Talaat Abdallah, according to Al Jazeera Mubasher Misr. The move sparked a wave of protests and violent clashes, particularly in front of Ettehadiya Palace in Cairo. The Cairo Administrative Court had ruled Tuesday that it does not have jurisdiction over a case calling for Abdallah’s dismissal. The court verdict has been hailed by observers who, along with pro-opposition critics, believe that through the declaration Morsi had granted himself sweeping powers, both executive and legislative. Hassan Yassin, aide to the prosecutor-general, told Ahram Online that the appeal court’s verdict is unconstitutional on the grounds that the transitional articles of the newly-ratified constitution have shielded all constitutional declarations – issued by both the once ruling military council and the country’s elected president – from any appeal.  [Egypt Independent, Ahram Online, Aswat Masriya, DNE, AP, AMAY (Arabic), Shorouk (Arabic), Ahram (Arabic), Watan (Arabic), 3/27/2013]

Journalists Syndicate member snubs Public Prosecution
Gamal Fahmy, the journalist accused of insulting President Mohamed Morsi and subsequently “threatening national security” did not appear for interrogation on Tuesday. Fahmy had made the announcement earlier on Tuesday in a press conference, saying he does not believe in the credibility of Prosecutor General Tala’at Abdullah. According to Gamal Abdel Reheem, a member of the Press Syndicate board, the next step for the prosecution is to transfer the case to the court system and, according to law, Fahmy cannot be placed under temporary detainment as such a law does not exist in matters related to the press. [Egypt Independent, DNE, 3/26/2013]

ETA imposes new 10% tax on bank takeover, alarming investors
Egypt rattled investors on the Cairo stock market on Tuesday by unexpectedly announcing that a takeover of its second biggest private bank would be subject to a new capital markets tax. Shares in the bank, National Societe Generale Bank, which is being taken over by Qatar National Bank, tumbled by their legal limit of 10 percent and helped pushed Cairo’s benchmark index down to its lowest level since December. Cairo announced plans in December to introduce a 10 percent tax on major transactions on the stock market, including IPOs and takeovers – one of a number of new taxes to boost depleted government revenues – but had given no indication of when it would take effect. [Reuters, Asharq al-Awsat (Arabic), 3/26/2013]

Tourism sector fears Egypt custom tariffs on imports
Egypt’s governmental decision of imposing a 20 percent tariff on all equipment imported by tourist establishments, excluding automobiles, raised fears among investors, as the sector is still recovering from the political unrest that followed the 2011 January 25 Revolution. "The decision will increase burdens on the sector. It will affect renovation and maintenance work in touristic establishments, which already suffer from lack of liquidity," said Elham Al-Zayat,head of Egypt’s Federation of Tourism Chambers. He argued the equipment imported by the sector should be treated as production tools that should be exempted from customs tariffs, Al-Zayat added. Egyptian tourism minister Hisham Zazou forecasted that tourist numbers will rise by 21.7% by end of 2013 compared to last year, saying the government will focus on beach attractions. Egypt is expected to see a rise of tourist numbers by end of 2013 to reach 41 million, generating some $ 21 billion, he said. [Ahram Online, SIS, 3/27/2013]

Prosecutor orders release of activist Alaa Abdel Fattah
A senior prosecutor ordered the release of political activist Alaa Abdel Fattah on Tuesday, saying he refused to cooperate with investigators. Abdel Fattah arrived at the High Court in Cairo earlier Tuesday to be questioned over recent clashes with the Muslim Brotherhood outside their main headquarters in Moqattam. According to Hazim Salah, Abdel Fattah demanded a judge conduct his questioning, an indication he doesn’t trust the assigned prosecutors working on the case. Abdel Fattah arrived a day after being summoned in white clothing, in case he was arrested pending investigations. [Egypt Independent, Reuters, 3/26/2013]

Egypt imams condemn attacks on mosques
The Islamic preachers’ syndicates at Al-Azhar has denounced attacks on mosques during clashes at the Muslim Brotherhood headquarters and condemned the use of houses of worship during political disputes. In a statement published on Tuesday, the preachers called on state officials to enforce the law on those who carry out acts of vandalism and corruption, and said political groups should not provide "a political facade" for violence and thuggery. Leadership of a Moqattam mosque accused members of “religious currents” of storming the place of worship amid clashes on Friday around the Muslim Brotherhood headquarters. [Ahram Online, DNE, 3/26/2013]

Morsi echoes calls for investment but against ‘meddling fingers’ at Doha summit
President Mohamed Morsi reiterated calls for interlopers to stop "meddling" in Egypt’s internal affairs during his Tuesday address at the Arab League of Nations Summit in Doha, Qatar. "I will not allow anyone to put their fingers in Egypt," Morsi said, echoing a warning he made Sunday following violent clashes near the Muslim Brotherhood headquarters in Moqattam. He also said Egypt attaches great importance to boosting direct investment as a catalyst for Arab integration especially since there are opportunities that require collaborative efforts. Morsi stressed the necessity to adopt policies and procedures that guarantee strengthening the role of the private sector. The president urged all Arab countries to make use of the promising investment opportunities in Egypt. [Egypt Independent, Aswat Masriya, DNE, SIS, 3/26/2013]

Egypt’s president Morsi to attend BRICS summit
Egyptian President Mohamed Morsi arrived in Durban to attend the fifth BRICS summit in South Africa after participating in the opening of the Arab League Summit in Qatar, according to Al-Ahram Arabic news website. Earlier this month, President Morsi received an invitation to attend the summit for the powerful grouping of the world’s fastest-growing and largest emerging economies: Brazil, Russia, India, China and South Africa. Morsi will meet his Russian counterpart Vladimir Putin on the sidelines of the BRICS summit to discuss Syria, while possibly also touching upon Cyprus. [Ahram Online, Egypt Independent, Aswat Masriya, SIS, 3/27/2013]