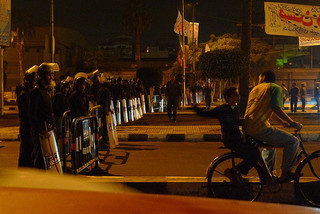 The death toll in violence at the Cairo headquarters of the Republican Guard on Monday rose to fifty-one with 435 injured, the head of Egypt’s emergency services said.

Death toll in Cairo shooting rises to more than fifty, says emergency services
The death toll in violence at the Cairo headquarters of the Republican Guard on Monday rose to fifty-one with 435 injured, the head of Egypt’s emergency services said. Facts remain unclear as to what exactly transpired at the Republican Guard sit-in; conflicting reports are coming from the army as well as the protesters regarding who instigated the attack. [Reuters, Daily News Egypt, 7/8/2013]

Egypt’s Muslim Brotherhood calls for uprising
The Muslim Brotherhood called on Egyptians to rise up against those who "want to steal" the revolution, a statement by its political wing said on Monday, after the Health Ministry said dozens of people were killed in shooting outside the Cairo headquarters of the Republican Guard. The Freedom and Justice Party (FJP) Secretary General Hussein Ibrahim announced on his Facebook page that the party refuses to participate in talks with interim president Adly Mansour. [Reuters 8/7/2013, Daily news Egypt 8/6/2013]

Court exonerates anti-Morsi activists
The Cairo Criminal Court acquitted Ahmed Douma, Alaa Abd El-Fattah, and Nawara Negm, along with several other activists on charges of inciting violence against the Muslim Brotherhood on Sunday. The prosecution had ordered their arrest in March after deadly clashes broke out in front of the Brotherhood’s main headquarters in Moqattam. [Daily News Egypt, 7/7/2013]

Hundreds gather in Algeria Square, plan to take on the militias
Protestors demonstrating against the continued presence of unofficial brigades in the country are threatening to take on the militias. Sunday’s protest was noticeably more organized than previous rallies. Protestors came, not just from Tripoli, but also outlying towns including Zintan and Zawiya, according to army officer Laith Alhasi. “People want these militias to join the army and the police force,” Alhasi told the Libya Herald, “but as individuals, rather than a group joining up together.” He added that Libyans wanted security forces to break their links to political parties. [Libya Herald, 7/7/13]

Town elders defuse Zintan-Ghariyan dispute
Fighting between Zintan and Ghariyan appears to have been avoided after the councils of elders in both towns defused tensions that arose after Ghariyan seized thirteen Zintani vehicles, allegedly carrying arms to Tripoli. In response, Zintan seized a number of Ghariyanis in Tripoli. The agreement among the elders came despite Ghariyan’s refusal, along with Misrata, to attend a national conference held on Saturday in Zintan to look at the challenges of statehood. Debates included achieving reconciliation among warring tribes and towns, as well as looking at security issues. [Libya Herald, 7/8/13]

Two Libyan oil ports to reopen after forced shutdowns
An agreement has been reached with security guards who had shut down two oil ports in eastern Libya, allowing exports to resume, an official present at the negotiations said on Sunday. Members of the security forces guarding Es Sider and Ras Lanuf ports had shut them down in the last few days after they demanded better work conditions. The shutdowns were the latest in a string of disruptions hampering Libya’s return to pre-war crude output levels of around 1.6 million barrels per day. [Reuters, 7/7/13]

Rome talks focus on security cooperation
A Libyan delegation, led by Prime Minister Ali Zidan, was in Rome on Wednesday and Thursday, meeting with several Italian officials including Premier Enrico Letta. During the state visit, the activation of agreements and other issues were discussed, with a focus on helping Libya with its internal security and border control. The latter is a major issue for not only Libya but Europe in general, as migrants from Africa have ended up on the shores of Malta and Italy. At a joint press conference, Zidan announced that in coming weeks 5,000 Libyan troops would undergo training in Italy as part of the cooperation between the two nations. [Libya Herald, 7/6/13]

Syrian opposition chooses Saudi-backed leader
Syria’s fractious opposition elected a new leader on Saturday but rebel groups were reported to be fighting among themselves in a sign of growing divisions on the ground between factions trying to topple President Bashar al-Assad. The Syrian National Coalition chose Ahmad Jarba as its president after a close runoff vote that reinforced the influence of Saudi Arabia over the opposition movement. He defeated businessman Mustafa Sabbagh, a point man for Qatar, which has seen its influence over the opposition overshadowed by the Saudis. [Reuters, 7/6/2013]

Syria Baath party leadership replaced, including vice president
Syria’s ruling Baath party, headed by the country’s embattled President Bashar al-Assad, announced on Monday that its top leadership would be replaced, including Vice President Farouk al-Sharaa. The party’s central committee published the names of sixteen members of the new leadership, which included none of the party’s old chiefs with the exception of Assad. The website said Assad would remain the party’s secretary general. [NOW/AFP, 7/8/2013]

Syria official says forces take rebel area of Homs
A Syrian government official claimed that the army wrested a contested district of a key city from rebels on Monday after ten days of fierce fighting. The official, from Homs province, said troops took the Khaldiyeh district but were still "cleaning" out rebel-held pockets. Two activists based in the city denied the claim, saying rebels were under heavy fire but still holding on. Meanwhile, the Syrian Observatory for Human Rights claimed on Sunday that the regime’s assault has left sixty to seventy percent of Khaldiyeh damaged, destroyed, or uninhabitable. [Daily Star/AP, Daily Star, AFP, 7/8/2013]

Rebels clash with al-Qaeda-linked opposition group in Syria
Rebels clashed with an opposition unit linked to al-Qaeda in northern Syria, activists said on Saturday, in a deadly battle that signals growing divisions among rebel groups and rising tensions between locals and more radical Islamist factions. The latest clashes happened in the town of al-Dana near the Turkish border on Friday in an area where the the Islamic State of Iraq and al-Sham (ISIS) has been working to cement power in recent months. [Reuters, 7/6/2013]

Ennahda rally in support of Egypt’s Morsi disbanded
A demonstration against the removal of ex-Egyptian President Mohamed Morsi was disbanded by the authorities Saturday outside the Egyptian embassy in Tunis. The ministry of interior disbanded the approximately two hundred protestors after Ennahda issued a Facebook statement calling on its members to attend the demonstration. [Tunisia Live, 7/8/2013]

Group pledges to prevent overthrow of government
The leader of the Leagues for the Protection of the Revolution in Tunisia has asserted that his organization would use violence if necessary to prevent a government overthrow similar to Egypt’s. Mounir Achour, the head of the Leagues, explicitly warned Tunisians against such an act, saying,“We are ready to resort to violence if necessary.” [Tunisia Live, July 5, 2013]

Thousands demand secession for south Yemen
Thousands of people rallied in south Yemen on Sunday’s nineteenth anniversary of the civil war that was won by the north to demand secession for the south. "No union and no federation—no to the occupation," chanted the crowds in the Hadramawt provincial capital of Mukalla. In a statement, the protest organizers reaffirmed their rejection of the national dialogue underway in the capital Sanaa. They demanded "negotiations… under Arab or international patronage to discuss ways of ending the occupation of the south." [AFP, 7/7/2013]

Yemen struggles to absorb returnees from Saudi Arabia, asks IOM for assistance
Yemen has asked the International Organization for Migration (IOM) to provide assistance to some 200,000 Yemeni migrant workers forced to leave Saudi Arabia since April as part of a crackdown on undocumented migrants. The Yemeni government has asked to support vulnerable returnees, some of whom are thought to have been in Saudi Arabia for two or three generations, by providing basic assistance in terms of shelter, access to water, non-food relief items, and hygiene kits. [IOM 7/5/2013, Al Bawaba News 7/7/2013]

Bomb attack kills soldiers in Yemen’s capital
A roadside bomb in Yemen’s capital Sanaa killed three soldiers and injured two others while they were on a security patrol, a security official said. The official said the blast early on Saturday targeted a car in Sanaa’s al-Hasaba district, a center of opposition to former Yemeni leader Ali Abdullah Saleh who was ousted early last year. Eyewitnesses said they tried to contact security forces immediately after the explosion but there was no immediate response. Shop owners and other bystanders took the soldiers to the hospital. [Al Jazeera 7/6/2013, Yemen Times 7/8/2013]

National Dialogue Conference concludes mid-term session with 363 directives
The National Dialogue Conference concluded its mid-term general assembly with 363 directives from six working groups, giving a glimpse of what the new constitution might look like. The directives that were passed include an agreement on 30 and 20 percent quotas for women and youth respectively in state institutions; and banning the president, prime minister, ministers of defense and interior, as well as the heads of intelligence agencies from appointing any relatives in military, security, and intelligence agencies. [Yemen Times, 7/8/2013]

Still without a government, Lebanese interim PM admits failed efforts
Lebanese Prime Minister-designate Tammam Salam said on Monday that his efforts to form his government had yet to bear any results and said the unfavorable option of resignation was still available to him, although he ruled it out at the present time. [The Daily Star, 7/8/2013]

Iraqi Kurdistan chief on rare visit to Baghdad
The president of Iraq’s autonomous Kurdish region, Massud Barzani, visited Baghdad Sunday for the first time in years for landmark talks with Prime Minister Nuri al-Maliki on an array of disputes. The two held a joint news conference in the capital’s heavily fortified Green Zone, a major change from last year when the Kurdish leader was advocating the premier’s removal from office. [AFP, Reuters, 7/7/2013]

Iraqi parliament prepares for battery of new legislation
Party leaders in Iraq’s parliament succeeded last week in completing an important agreement on enacting a package of long-delayed laws concerning the criminalization of the Baath Party and regulating the court system and political parties. The leaders agreed to set a vote on controversial and deactivated laws for mid-July. [Al Monitor, 7/5/2013]