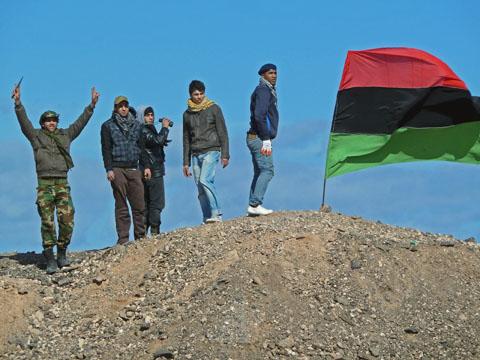 The leader of a political group in Libya’s oil-rich Cyrenaica province declared it a self-governing region in a speech on Saturday, evidence of growing pressure for a new constitution to adopt a federal structure.

Egypt court rules against Shura Council, Constituent Assembly
Egypt’s highest court ruled on Sunday that the interim parliament was illegally elected, but stopped short of dissolving the chamber, in a decision likely to fuel the tensions between the ruling Islamists and the judiciary. The Supreme Constitutional Court also ruled that a 100-member panel that drafted the new constitution was illegally installed. [AP, Reuters, Daily News Egypt, Ahram Online]

Egypt launches first phase of plan to cut fuel subsidies
Egypt has begun to implement the first phase of a project to distribute petrol from depots to gas stations with smart cards as part of a plan to control smuggling, and to restructure energy subsidies, which account for about one-fifth of the country’s budget. Gas stations continue to face bottlenecks, as the government faces increasing demand as smuggling and black market sales continue. [Aswat Masriya, Aswat Masriya, Daily News Egypt]

Al-Sharqawi defends draft NGO law, Foreign Ministry argues law is an internal matter
Critics of the draft NGO law are exaggerating the bill’s flaws, according to the assistant to the president for political affairs. Pakinam Al-Sharqawi outlined eleven points in a statement issued on Saturday in response to claims that the NGO bill was hostile and oppressive toward Egyptian civil society. Al-Sharqawi argued that notifying the government of intentions to establish a civil society organization was an “easy” process. [Daily News Egypt, State Information Service]

‘Murderers’ of revolutionary icon, Khaled Said, released
Alexandria Criminal Court adjourned on Saturday the retrial of policemen accused of killing Khaled Said—an iconic face of Egypt’s revolution—to July 6 and ordered their release. The policemen were found guilty of illegal imprisonment, torture, and violence. The family and supporters of the late 28-year-old Said were shocked at what they considered a light sentence. Families of the defendants reportedly attempted to attack Said’s mother in the courtroom while the judges’ deliberated the appeal. [Ahram Online, Daily News Egypt, Aswat Masriya]

Libya to contest ICC bid to try Gaddafi son
Libya has said that it will appeal to International Criminal Court decision to prosecute Saif al-Islam Gaddafi, a son of the country’s late leader Muammar Qaddafi. Libyan Justice Minister Salah al-Marghani, in a joint news conference with Prime Minister Ali Zidan, said on Sunday that they will appeal within five days of the ICC’s decision on Friday. [Al Jazeera/AFP]

Libya announces measures to tighten security in the south
Libya announced measures Sunday to tighten security in the south and along its southern borders, after charges from its neighbors that the area has become a source of regional instability. Soldiers and former rebels who took part in the 2011 revolution that toppled Muammar Qaddafi, will be paid bonuses of up to $1,200 to work in the desert region, he said. Meanwhile, France has offered to work with Libya to seal its borders to Islamist fighters fleeing Mali, Defense Minister Jean-Yves Le Drian said Sunday. [Middle East Online, All Africa/Rfi]

East Libya group declares autonomy
The leader of a political group in Libya’s oil-rich Cyrenaica province declared it a self-governing region in a speech on Saturday, evidence of growing pressure for a new constitution to adopt a federal structure. Ahmad Zubair al-Senussi, head of the Cyrenaica Council and a distant relative of Libya’s last king, has no formal authority under current transitional arrangements and it is not clear how he would be able to implement the declaration. [Gulf News/Reuters]

Government denies seeking Russian arms
Libya has denied reports that it is seeking a resumption of Russians arms supplies. The official spokesman for the Ministry of Defense in Tripoli, Adel Barasi, today told the Libya Herald that there was no truth in rumors that Libya had approached the Russians, asking Moscow to lift its arms embargo and restart weapons supplies. [Libya Herald]

Key bloc quits Syria opposition, slams leaders
The Syrian Revolution General Commission, a key bloc within Syria’s main opposition National Coalition, announced its withdrawal from the body on Monday accusing some leaders of misusing funds and being motivated by personal ambition. The announcement came after delegates at inconclusive talks in Istanbul agreed to add fourteen members of a liberal bloc led by veteran figure Michel Kilo to the 60-member assembly of the Syrian National Coalition. [Daily Star, Al Arabiya]

Syrian rebels, Hezbollah in deadly fight in Lebanon
At least twelve Syrian rebels were killed overnight east of the Bekaa Valley town of Baalbek in an ambush by Hezbollah, security sources said, adding that one member of the resistance group was also killed in the first confrontation between rivals on Lebanese soil. [Reuters, Daily Star]

Gulf states to consider punishing Hezbollah for role in Syria
Arab Gulf states will consider taking measures against Hezbollah if the Shia Muslim Lebanese movement continues its involvement in Syria’s civil war or interferes in Gulf Arab affairs, the head of their six-member bloc said on Sunday. GCC chief Abdullatif al-Zayani gave no other details on the nature of the measures or the interests to which he was referring. [Al Arabiya, Reuters]

World Bank mission expected in June
A World Bank (WB) mission is expected to visit Tunisia this month to survey conditions for assistance, WB President Jim Yong Kim told TAP news agency at the end of his meeting on Saturday with President Moncef Marzouki in Yokohama, Japan. [All Africa]

Military officer killed by friendly fire on Chambi mountain, eight others wounded in mine explosion
A warrant officer in the Tunisian military died yesterday from friendly fire on Chambi Mountain, in western Tunisia, while the military was conducting operations against militants there late Sunday and early Monday. Eight other military personnel were also injured while sweeping the area. The interior ministry said on Friday that members of the radical Salafist group Ansar al-Sharia are among the jihadists the military is targeting in the western region. [Tunisia Live, Ahram Online]

Tunisia’s interior ministry bans pro-Islamist rally
Tunisia’s interior ministry banned a rally in Tunis on Saturday by a controversial militia linked to the ruling Islamist Ennahda party but dozens flaunted the order and gathered anyway. A branch of the League for the Protection of the Revolution in the capital’s suburb of Kram had called for the rally to demand that a controversial bill on the “immunization” of the revolution be adopted quickly. [Al Arabiya/AFP]

AQAP warns attacks on United States are within ‘everyone’s reach’
Qassim al-Rimi, al-Qaeda’s military chief in Yemen, warned Americans in an audio message posted online yesterday that the Boston bombings revealed the fragile security of the United States. He urged Muslims to defend their religion, saying that making bombs such as the ones used in the twin blasts in Boston in April, is within “everyone’s reach.” [Gulf News]

Two drone strikes kill seven in southern Yemen
Two drone strikes killed seven suspected al-Qaeda militants in the southern province of Abyan in Yemen on Saturday, nine days after US President Barack Obama said he would only use such strikes when a threat was “continuing and imminent.” The United States has launched eleven drone strikes in Yemen so far this year. [Reuters, The Long War Journal]

Four dead in Lebanon’s Tripoli, shots fired at Sidon cleric
Four people died in clashes in Lebanon’s northern city of Tripoli and gunmen attacked a cleric in the southern port of Sidon on Monday, security sources said, in more violence stoked by civil war in neighboring Syria. The overnight clashes in Tripoli ended a week of relative calm after twenty-nine people were killed last month in the deadliest fighting yet between gunmen who support the uprising against Bashar al-Assad and Allawite supporters of the Syrian president. [Reuters, Al Jazeera]