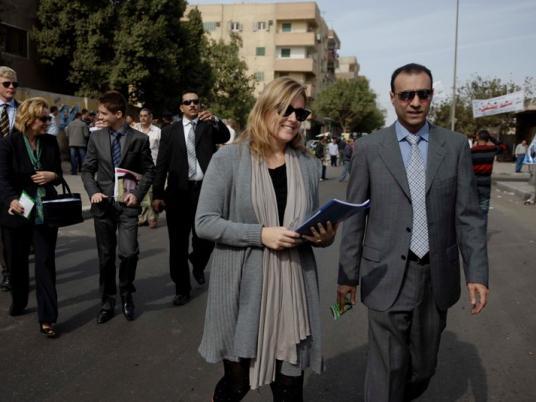 Egyptian authorities have finally allowed observers of this week’s presidential election to start work, monitoring groups said on Tuesday, too late for them to draw a full picture of Egypt’s first genuine leadership contest. Many international monitors arrived in April but waited weeks for the necessary paperwork, forcing them to miss most of an election campaign enlivened by mass rallies, vigorous canvassing and Egypt’s first televised presidential debates.

The National Council for Human Rights (NHCR) called upon the Presidential Elections Commission to extend the voting period to allow all Egyptians to cast their votes. NCHR Deputy Chairman Mohamed Fayek said that the council will convene with its members Tuesday to discuss procedures for monitoring the electoral process in a number of governorates. The Ibn Khaldun Center for Democratic Studies, which founded the Horranazeha (free and fair) Coalition, said that it has recently seen violence between supporters of various candidates, and alleged that one candidate has been using armed civilians for protection. The Horranazeha Coalition demanded in a statement Monday an investigation into rumors that local constituencies and members of the defunct National Democratic Party support certain candidates, which it says could result in incidents of thuggery.

The Supreme Presidential Elections Commission (SPEC) decided on Monday to refrain from announcing the final vote count of Egyptian expatriates in Saudi Arabia. The commission announced its reservations over the results collected from the Riyadh and Jeddah consulates following complaints by campaign representatives of presidential contenders, Abdel Moneim Abul-Fotouh and Khaled Ali. Both claim their supporters were obstructed from voting. SPEC Secretary-General Hatem Bagato explained late Monday that in light of the reported violations by the Riyadh and Jeddah electoral committees, the final result could not be announced. He stressed the importance of receiving the necessary documents detailing these reported infringements so an investigation could be carried out. The campaign representative of candidate Mohamed Mursi, expected to win a majority vote in Saudi Arabia, objected to the decision by the SPEC to delay announcing the final results.

State-owned Al-Gomhurriya newspaper on Tuesday published a full-page advertisement for Ahmed Shafiq’s presidential candidacy paid for by an outside group, violating the campaign silence period as stated in the Presidential Elections Law. The gag order began late Sunday, two days before domestic polls open on Wednesday. The same newspaper also ran a pro-Shafiq advertisment Monday. According to the Presidential Elections Law, the electoral silence period bars any form of campaigning by candidates or their supporters during the two days preceding the polls.

Egyptian authorities have finally allowed observers of this week’s presidential election to start work, monitoring groups said on Tuesday, too late for them to draw a full picture of Egypt’s first genuine leadership contest. Many international monitors arrived in April but waited weeks for the necessary paperwork, forcing them to miss most of an election campaign enlivened by mass rallies, vigorous canvassing and Egypt’s first televised presidential debates. The election committee has accredited 9,700 monitors from 54 foreign and local groups for the presidential election, said Hazem Mounir of the election unit at Egypt’s National Council for Human Rights, far fewer than in the parliamentary vote. Another local monitor group, the Egyptian Association for Community Participation Enhancement, said it would pull out because of the strictures imposed by the election committee.

An Egyptian court sentenced 12 Christians to life in prison and acquitted eight Muslims on Monday in a case set off by religious tensions in the country’s south. The Christians were found guilty of sowing public strife, the possession of illegal weapons and shooting dead two Muslims in April of last year in Minya province, about 220 kilometers (135 miles) south of Cairo. The religious tension in Minya spilled over into violence last year when a Muslim microbus driver, angered by a speed bump outside a wealthy Christian man’s villa, got into a scuffle with security guards who beat him. For several days after, angry villagers torched dozens of Christian homes and stores. The State Security Court, whose rulings cannot be appealed, handed down its sentence on Monday. The ruling military council is the only entity with the power to request a retrial.

An Egyptian court sentenced five policemen to 10 years each in prison on Tuesday for their role in killing protesters in the uprising that toppled Hosni Mubarak, the first such conviction against the force that was blamed for hundreds of deaths. Two more policemen were sentenced to a one-year suspended sentence, while 10 others were acquitted, one of the judges involved in the case before the court in the Cairo district of Giza, Mohamed Darwish, said. (EDITOR’S NOTE: Al Jazeera reporter Rawya Rageh notes that the officers were tried in absentia which explains the harsh sentence. Should they appear and request a retrial, their sentence a judge would likely commute their sentence.)

Saudi Arabia’s Finance Minister Ibrahim Al-Assaf said in a speech on Tuesday that the OPEC country was in the process of finalising its $2.7-billion aid package for Egypt. The funds are aimed at helping Cairo secure a $3.2-billion IMF loan following the uprising that swept Hosni Mubarak from power in February 2011. After the transfer of $1 billion to Egypt’s central bank earlier this month, the Saudi package also includes $500 million of support for development projects, $250 million to finance purchases of petroleum products and $200 million for small- and mid-sized firms.

Fuel shortages have already caused public anger this year and slowed the grain harvest. And with creditors pressing for Egypt’s new leaders to risk a popular backlash by cutting back on longstanding fuel subsidies, the generals may also be anxious to ensure supplies for the army’s own trucks and tanks. Tender documents seen by Reuters show state-owned Egyptian General Petroleum Corp (EGPC) is seeking to buy more than one million tonnes of gasoil, or diesel, from July to September – almost as much as it sought in the preceding six months. "It certainly seems to be an attempt to safeguard political stability. The army is probably looking at different contingency plans and questions over what will happen next," said Jane Kinninmont, a senior research fellow at London’s Chatham House.