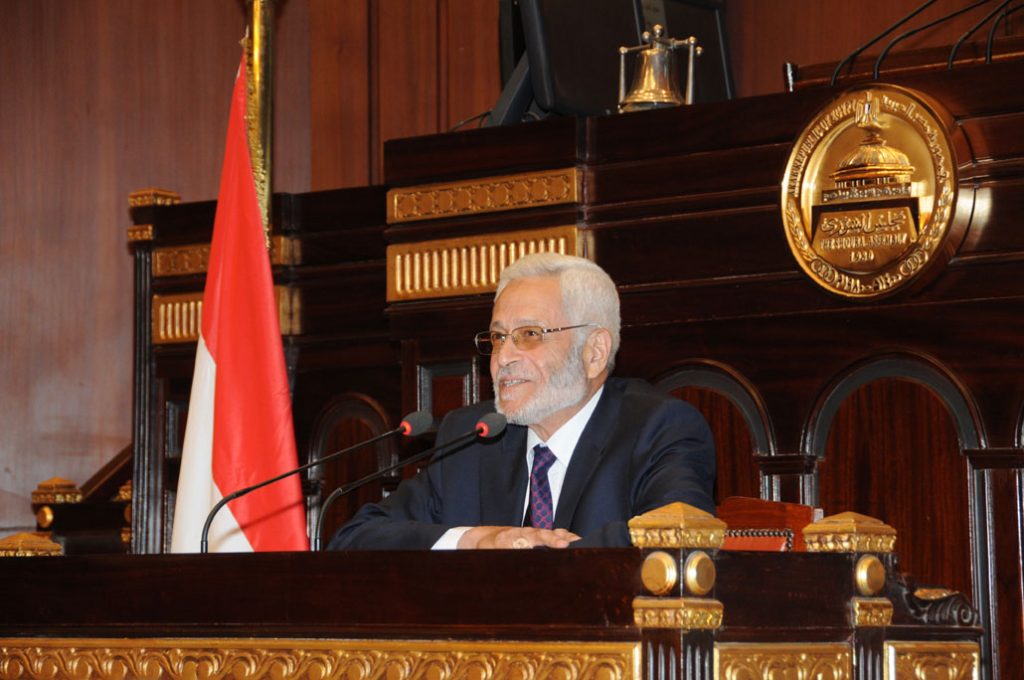 The head of the assembly drafting Egypt’s new constitution said the final draft would be finished on Wednesday, and three other members of the assembly told Reuters the document would be put to a vote on Thursday.

President stands by new powers, chief of staff says
President Mohamed Morsy will not retreat on the controversial constitutional declaration he issued Thursday, according to his chief of staff, Mohamed Refaa al-Tahtawi. In an interview with Al-Hayat 2 satellite channel late Tuesday, Tahtawi claimed that Morsy’s supporters outnumbered his opponents, the tens of thousands of protesters in Tahrir Square and around the country notwithstanding. “No going back. I do not want to speak menacingly, but we are prepared for any escalations,” said Tahtawi. [Egypt Independent, 11/28/2012]

Islamists launch initiatives to defend Morsy
Islamists launched initiatives Tuesday to defend President Mohamed Morsy, who faces mass demonstrations against the constitutional declaration he issued on 22 November. Political science professor and Morsy adviser Saif Abdel Fattah launched an initiative that includes issuing a new constitutional declaration comprising the first and third articles of the recent declaration. The initiative included a comprehensive ministerial reshuffle to exclude ministers who had links to the former regime or are suspected of corruption. The initiative suggested putting to referendum the return of the People’s Assembly and Shura Council and retaining the current Constituent Assembly.

National Council for Human Rights deputy head resigns
The deputy head of the National Council for Human Rights (NCHR), Abdel Ghaffar Shokr, formally resigned on Wednesday. Human rights lawyer and member of the NCHR Mohamed Zare’ also announced his intention to resign. The resignations follow an emergency meeting on Tuesday to discuss the controversial constitutional declaration issued by President Mohamed Morsy last Thursday. The eight-hour-long meeting resulted in a statement described by Zare’ as a “disappointing compromise.” According to Zare’ the contradictory and politicised make up of the NCHR held the council back from issuing a more severe statement. [DNE, 11/28/2012]

Abul-Fotouh’s party to march against Morsi’s decree
The Strong Egypt Party has called for a march to the presidential palace in Heliopolis on Thursday, to voice disapproval of the controversial constitutional declaration issued by President Mohamed Morsi last week, and to press for the implementation of the party’s initiative to resolve the crisis caused by the decree. The centrist party, led by former presidential candidate and former leading member of the Muslim Brotherhood Abdel-Moneim Abul-Fotouh, had earlier introduced its own proposal for a way out of the political crisis caused by the decree, which many political groups have opposed. [Ahram Online, Egypt Independent, 11/27/2012]

Egypt constitution draft to be finished Wednesday
The head of the assembly drafting Egypt’s new constitution said the final draft would be finished on Wednesday, and three other members of the assembly told Reuters the document would be put to a vote on Thursday."We will start now and finish today, God willing," Hossam el-Gheriyani, the assembly speaker, said at the start of a meeting of the constitutional assembly in Cairo. He said Thursday would be a "great day", without elaborating, and called on the members who had withdrawn from the body to return. [Reuters, 11/28/2012]

More judges join strike against Morsi declaration
The General Assembly of the Cairo Appeal Court has announced its members will go on strike from Wednesday until President Morsi rescinds his Constitutional Declaration. The appeal court judges are the latest to go out on strike to combat what they say is "a threat to judicial independence." On Tuesday, the Judges Club condemned the presidency’s recalcitrance and said it would escalate its strike to force Morsi to retract the declaration. The Judges Club also claimed that 99 percent of courts and prosecutions had suspended their work and joined a strike against the decree. [Ahram Online, Egypt Independent, NPR, Reuters, EGYNews (Arabic), 11/28/2012]

Diaspora Copts sentenced to death over anti-Islam movie
Cairo Criminal Court on Wednesday sentenced seven diaspora Coptic Egyptians to death in absentia over involvement in the production of an anti-Islam film made in the US. The text of the ruling has been forwarded to Egypt’s grand mufti for approval and has been asked to make a decision by 29 January. [AP, Egypt Independent, Ahram (Arabic), 11/28/2012]

IMF: Egypt must keep steady course for loan review
The International Monetary Fund’s board will require there is no major change in economic outlook or policy when it considers approving a US$4.8 billion loan to Egypt, an IMF spokesperson said. The loan deal was agreed in principle this month with an IMF team in Cairo and the board is expected to meet to finalize the facility on 19 December. Egyptian officials have not indicated any shift in economic plans that include reining in the budget deficit from about 11 percent of gross domestic product in 2011/12 to 8.5 percent in the financial year that ends in June 2014. [Egypt Independent, 11/27/2012]

Firm conditions attached to Turkey’s loan to Egypt
Turkey’s loan to Egypt is contingent upon Egypt including Turkish companies in infrastructure projects and providing the Turkish government with expenditure reports, an anonymous source has revealed to Daily News Egypt. The terms and conditions attached to Turkey’s $1 billion loan to Egypt stipulate that the loan will be granted in two installments of $500 million each, the first having already been granted at the end of October, with the second be given on 30 January 2013. [DNE, 11/27/2012]

Standoff continues between protesters, security near Tahrir
Security arrested 18 protesters during clashes in Simon Bolivar Square Wednesday near the US Embassy in Cairo, state-run news agency MENA reported. The day after tens of thousands filled the square in protest against the president’s constitutional declaration, protesters once again blocked off traffic in Tahrir Square after partially reopening it earlier in the day. Clashes nearby the square are still ongoing, with protesters pelting security forces with stones and security forces answering them with teargas canisters. [Egypt Independent, 11/28/2012]

Protesters storm Alexandria Brotherhood office, set Mansoura FJP office on fire
Protesters rejecting President Mohamed Morsy’s new constitutional declaration stormed the Muslim Brotherhood’s office in Alexandria on Tuesday night. Eyewitnesses said that the protesters threw furniture and equipment from the office in Smouha into the street, chanting, “Leave, leave” and, “The people want to topple the regime.” They added that there was no security presence in the area. “Central Security Forces officers refused to secure the office [of the group] and the Freedom and Justice Party to not get involved in the clashes,” a source within the Alexandria Security Directorate said. [Egypt Independent, DNE, 11/27/2012]

Anti-decree protests sweep governorates
Citizens in several governorates took to the streets Tuesday to protest Morsy’s declaration granting himself broad powers and immunizing the Constituent Assembly and Shura Council from being dissolved. The Muslim Brotherhood had called for simultaneous protests in Cairo and governorates to support Morsy, but postponed the Cairo protests while saying its members would protest in other parts of Egypt. [Egypt Independent, 11/27/2012]

Security forces assault photojournalist in clashes near Tahrir
Central Security Forces reportedly physically assaulted photojournalist Ahmed Gomaa of the privately-owned Al-Dostor newspaper on Tuesday while he was covering clashes between protesters and security forces in Simón Bolívar Square near the US Embassy in Cairo. Gomaa’s colleagues said that Journalists Syndicate has not contacted him, and they expect him to file a complaint against the Interior Ministry once he recovers. [Egypt Independent, 11/27/2012]

US senator calls for halt to Egypt aid unless Morsi rescinds decree
The Obama administration should threaten to withhold financial aid from Egypt unless President Mohamed Morsi responds to opposition demands to rescind last week’s controversial decree, US Republican Senator John McCain told the Wall Street Journal on Monday. "This is not acceptable; this is not what US taxpayers expect from Egypt, and our dollars should be directly related to the progress of democracy, which President Morsi promised at the start of his term," McCain asserted. The US has leverage not only in providing aid but also in marshalling public opinion, and this is how it can pressure Morsi to withdraw his decree, said McCain. [Ahram Online, 11/28/2012]