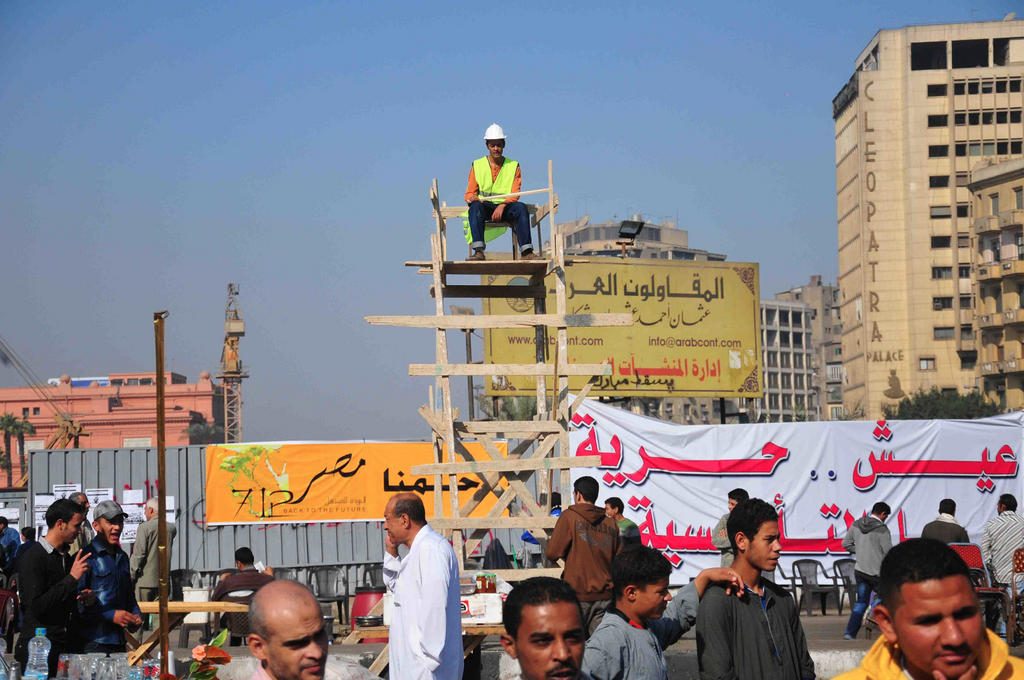 An Islamist-led assembly finalized a new constitution early on Friday aimed at transforming Egypt and paving the way for an end to a crisis that erupted when President Mohamed Morsi gave himself sweeping new powers last week.

Morsi on TV: Constitutional Declaration temporary, meets revolutionary goals
The controversial 22 November Constitutional Declaration "meets the requirements of the current period" and will expire as soon as a new constitution is approved through a popular referendum, said President Mohamed Morsi in his state TV interview aired on Thursday night.
The decree made all of Morsi’s decisions immune from judicial oversight until the new constitution is ratified and a new Parliament is elected. Since Morsi issued the declaration last Thursday, it has sparked mass protests by opposition forces and a strike by judges across the nation. [Egypt Independent, Ahram Online, DNE, EGYNews (Arabic) 11/30/2012]

Egypt PM calls for arrest of protest provocateurs
Egyptian Prime Minister Hisham Qandil has called on the police to arrest provocateurs who attack security forces and public buildings with stones and Molotov cocktails during protests. He made the comments during his first visit to the area around Tahrir Square that has been the site of ongoing skirmishes between police and protesters since President Morsi made his controversial constitutional declaration on 22 November. Qandil called on security forces to undertake all necessary legal and security measures to arrest provocateurs and put them on trial. [Ahram Online, 11/30/2012]

Salafist support for Morsi limited to recent constitutional declaration
Salafists groups claim at a press conference on Thursday that recent Tahrir Square protests against Egyptian President Mohamed Morsi’s constitutional declaration are "counter-revolutionary." Yet, their support for President Morsi is limited, as the proposed constitution falls short of their approval due to the lack of Sharia law as the "main" source of legislation. [Ahram Online, 11/29/2012]

Egypt constitution finalized as opposition cries foul
An Islamist-led assembly finalized a new constitution early on Friday aimed at transforming Egypt and paving the way for an end to a crisis that erupted when President Mohamed Morsi gave himself sweeping new powers last week. The assembly concluded the vote after a session that lasted 19 hours, approving all articles including presidential powers, the status of Islam, the military’s role and the extent to which human rights will be respected in the post-Hosni Mubarak era. [Ahram Online, Egypt Independent, DNE, EGYNews (Arabic), Shorouk (Arabic) 11/30/2012]

Seven officers found not guilty of killing protesters in Dar al-Salaam
The Cairo Criminal Court acquitted on Thursday seven police officers accused of killing three civilians and wounding others on 28 January 2011, during revolution protests. The defense argued the evidence used to prosecute them was based on hearsay and inspired by vendettas against the defendants. Prosecutors said investigations showed the policemen had fired at peaceful demonstrators in Dar al-Salaam. Their trial on charges of murder and attempted murder began on 25 October 2011. [Egypt Independent, 11/29/2012]

Also of Interest:
Morsi takes on judges in battle over Egypt’s future | Reuters

Egypt’s economic reform plan: Revolutionary social justice, or more of the same?
The details of a 10-year economic reform plan that officials say aims to make Egypt “a free and democratic civil state,” in which “all citizens enjoy human dignity,” were released by the Cabinet on Wednesday. The 11-page plan had been approved by the International Monetary Fund delegation earlier this month in the course of negotiations over a US$4.8 billion loan. The main component of the plan, made available on the web portal of state-run Al-Ahram newspaper, is a reduction of the government’s budget deficit through cuts to fuel subsidies and revisions to the current tax structure. [Egypt Independent, 11/29/2012]

Marches arrive in Tahrir as protesters chant against draft constitution
Marches began arriving in Tahrir Square Friday afternoon for the “Martyrs’ Dream” mass demonstration, which many political parties, movements and revolutionary groups had called for against the most recent constitutional declaration. Many protesters also decried the final constitutional draft, finished early the same morning. President Mohamed Morsi’s announcement of his declaration last Thursday sparked controversy and mobilized opposition groups. Demonstrators poured into Tahrir to join a sit-in started by hundreds of demonstrators after Morsi issued the declaration, which they say grants him unprecedented powers and makes him a new dictator. Protests throughout Egypt’s governorates are also taking place, both for and against the draft constitution. [Egypt Independent, Ahram Online, AP, EGYNews (Arabic) 11/30/2012]

Saturday’s pro-Morsi protest moved from Tahrir to Cairo University, says Brotherhood
The Muslim Brotherhood has decided to move Saturday’s protests in support of President Mohamed Morsi’s constitutional declaration to the Renaissance Square in front of Cairo University, the group announced on its official English Twitter on Thursday evening. Freedom and Justice Party Vice President Essam al-Erian said the decision was taken in order to avoid frictions with liberal demonstrators. Some feared that violence could erupt between Islamist demonstrators and revolutionary activists currently protesting in Tahrir. [Egypt Independent, Ahram Online, DNE, 11/29/2012]

Supreme guide: Former regime trying to destroy democracy
Remnants of the former regime are trying to thwart every step in the democratization process, including disrupting the completion of the country’s new constitution, claimed Muslim Brotherhood Supreme Guide Mohamed Badie. “It started with dissolving the Parliament that came from free elections that 30 million people took part in,” Badie said. “Now they want to dissolve the Constituent Assembly.” The Constituent Assembly, which was formed in June, is voting on the final draft constitution on Thursday amid objections from secular political forces. [Egypt Independent, 11/29/2012]

Calls by reporters for “blank” newspapers
Freedom of Expression Defense Committee called on newspapers to issue blank papers on Tuesday in protest against the latest constitutional declaration issued by President Mohamed Morsi a week ago, reported Ahram Thursday night. TV channels are expected to stop their broadcasting all day on Wednesday. [DNE, 11/29/2012]

U.N. rights chief says Morsi decree breaks human rights law
The U.N. human rights chief has warned Egyptian President Mohamed Morsi that his decree expanding his powers would put him beyond the law and open the door to human rights violations, her spokesman said on Friday. Navi Pillay sent a letter to Morsi on Tuesday, urging him to reconsider last week’s decree and warning that "approving a constitution in these circumstances could be deeply divisive," spokesman Rupert Colville told a U.N. briefing. [Reuters, Shorouk (Arabic), 11/30/2012]

Patterson: We are in regular contact with the various political forces
Patterson said in an interview with the newspaper al-Ra’i on Friday, said that "there are indications that the relations between democratic nations are more stable and more prosperous," asserting that "regular contacts with various political forces in Egypt have been conducted without discrimination or bias." She added, "We are working to build a constructive relationship with the representatives of all political parties in Egypt and major civil society organizations, and when differences are discussed openly, and whenever there is a security incident, we discuss it with the Egyptian government in order to make the necessary adjustments, and in close cooperation with the local police authority." [Shorouk (Arabic), 11/30/2012]