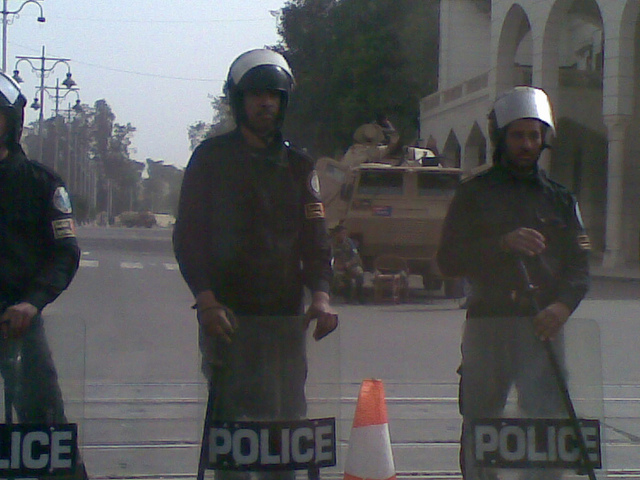 A North Cairo criminal court on Wednesday acquitted seven Egyptian security personnel who had been accused of firing on unarmed anti-regime protesters during Egypt’s January 2011 Tahrir Square uprising. Eyewitnesses testified to the prosecutor general that the defendants, who include four policemen and three mid-ranking officers, murdered one protester and attempted to murder 11 others.

Egypt political forces hail soldiers’ return; Opposition raises concerns
The release on Wednesday of seven soldiers kidnapped in the Sinai Peninsula last week was hailed as a victory for Egypt’s military/security apparatus by parties and figures across the country’s political spectrum. Authorities have detailed information about the Sinai kidnappers but feel it is not the right time to reveal it because intelligence operations are still underway, a military spokesman has said. Al-Dostour Party Chairman Mohamed ElBaradei, however, said there has been no accountability when dealing with security breaches in Sinai. No official statements were made by the president or the prosecutor general about what will happen to the kidnappers. Lawyers and NGOs have criticized the lack of transparency from the government in the matter. The Muslim Brotherhood released a statement, saying that it was time for government officials and community members to consider taking a new approach to dealing with Sinai with respects to its development and security concerns. [Ahram Online, DNE, SIS, 5/22/2013]

Shura Council discusses Judicial Authority Law; State Council appointments violations
The Shura Council continued discussions on the Judicial Authority Law (JAL) on Thursday, in the absence of a Ministry of Justice representative. The Council also discussed complaints by lawyers regarding State Council appointment violations. The Reform and Development MPs withdrew from the JAL discussion, objecting to the Shura Council’s insistence on speeding up the process and ignoring judicial concerns over the amendments. On Wednesday, civil lawmakers held a press conference outside the Shura Council against the proposed amendments to the Judiciary Law. The council members were forced to hold their press conference outside the Shura Council chambers when Speaker Ahmed Fahmy did not allow television cameras to enter the council. MP Ehab al-Kharrat criticized the amendments saying the state could not afford to have clashes between branches of government. [ONA (Arabic), EGYNews (Arabic), Shorouk (Arabic), DNE, 5/23/2013]

Cabinet approves draft law amending Police Corps Law and four other laws
The cabinet led by Hisham Qandil agreed in principle on Wednesday to amend provisions of the Police Corps Law, submitting it to the justice ministry for legal review and language. Among the changes are the replacement of article 103 with another granting secretaries and assistants the status of police officer conditioned on a law certificate, years of service, and good performance reviews. The cabinet also discussed four other laws, including a draft law to establish the National Security Council, a draft law establishing the National Defense Council, a draft law establishing the Supreme Council of the Armed Forces, and a draft law amending some provisions of the law command and control of the affairs of the defense of the state and the armed forces, in accordance with the 2012 constitution. [ONA (Arabic), 5/22/2013]

International judicial figure: Judges in Egypt have faced abuses
Egyptian judges have been mistreated, a statement from the Judges Club quotes head of the International Association of Judges (UIM) Gerhard Reissner as saying during a visit to Egypt. In its statement, issued this morning, the UIM asserted that any assessment of the Judiciary’s performance should not be influenced by politics, adding that characterizing the Judiciary as corrupt is an inappropriate generalization, as the existence of several corrupt judges should not implicate the entire institution. The UIM will listen to all parties involved and consider all points of view in preparation for submitting a comprehensive report on the current crisis to the UN, Reissner said in a speech delivered on Monday before the Conference to Protect the Independence of the Egyptian Judiciary. [Egypt Independent, 5/23/2013]

Egypt court acquits 7 policemen in Jan 25 killing of protesters
A North Cairo criminal court on Wednesday acquitted seven Egyptian security personnel who had been accused of firing on unarmed anti-regime protesters during Egypt’s January 2011 Tahrir Square uprising. Eyewitnesses testified to the prosecutor general that the defendants, who include four policemen and three mid-ranking officers, murdered one protester and attempted to murder 11 others. However, several of the defendants maintain that they were not present during the events. The prosecutor general later referred the case to the Cairo Criminal Court which found insufficient evidence to convict the officers and ordered their acquittal. [Ahram Online, Aswat Masriya, DNE, Egypt Independent, 5/22/2013]

Egypt court sentences four men to hang for killing priest
An Egyptian court sentenced four men on Wednesday to death by hanging for the 2011 killing of a Coptic Christian priest in his apartment in the southern city of Assiut, state news agency MENA reported. The four were found guilty of killing Reverend Dauoud Peter Boules during a robbery that was aided by his maid, MENA said. Omar Abdallah, Ali Yousef, Khaled Ali, Badawi Farghali, Ihsan Asham and Yassa Abdel-Messih have been sentenced to death. Al-Husseiny Abdallah has been sentenced to death in absentia and Mahmoud Abdallah has been sentenced to ten years in prison in absentia. There did not appear to be a political or religious motive behind the crime, a security source told Reuters. [Reuters, DNE, Ahram Online, Egypt Independent, 5/22/2013]

Egypt aims to reduce budget deficit to 6% of GDP in 5 years: Official
Egypt’s main short-term challenge will be to implement a raft of harsh reforms aimed at reducing the country’s budget deficit to between 5 and 6 percent of national output within five years, Abdullah Shehata, advisor to Egypt’s finance minister, was quoted as saying by al-Ahram’s Arabic-language news website on Tuesday. Speaking at the 13th Doha Forum in Doha, Qatar on Tuesday evening, Shehata asserted that the Egyptian government was obliged to implement the reforms, regardless of the IMF loan’s requirements. [Ahram Online, 5/22/2013]

Egypt to try fuel smart cards in July, August: Oil minister
Egypt will introduce a smart card system for subsidized fuel in July and August on a trial basis, Oil Minister Sherif Haddara said on Thursday. Using smart cards, consumers will be able to buy a limited amount of subsidized fuel, beyond which they will have to pay market prices. The system is aimed at reducing Egypt’s energy subsidy bill by over LE30 billion ($4.28 billion). Haddara said the system would reduce the amount of subsidized fuel that is smuggled or sold on the black market, which is currently estimated to be at least 20 percent. Meanwhile, the Egyptian government said on Wednesday it would supply more gas and diesel to power stations to deal with electricity shortages that have worsened in recent months after the cash-strapped country failed to import enough fuel. The government has set aside $200 million to finance the additional petroleum products and is in the process of approving an additional $525m, the cabinet said in a statement. [Ahram Online, Egypt Independent, 5/23/2013]

We know the identity of soldiers’ kidnappers: Egyptian army
Egyptian authorities have announced that they know the identities of the kidnappers of seven soldiers freed on Wednesday. At a press conference held jointly by the presidential office, the armed forces and the police, a presidential spokesperson, Ihab Fahmy, said that the soldiers’ release came without any negotiations with the militants who kidnapped them, and with the cooperation of all state institutions. Fahmy said that the security operation in Sinai, where the soldiers were held, is ongoing, and called on the Egyptian nation to stand united. A senior military source has said that the Egyptian army used a diversion strategy to secure the release of seven kidnapped Egyptian soldiers on Wednesday. One security official has denied media reports that a deal was made with jihadists to secure the release of seven hostages in the Sinai Peninsula. Islamists remain divided over ongoing operations in the area. [Ahram Online, Shorouk (Arabic), 5/23/2013]

Special female police unit to combat violence against women
The head of Egypt’s National Council for Women Mervat al-Tallawy met Wednesday with members of a new special unit of female police officers formed by the Interior Ministry to combat violence against women. Tallawy praised the Interior Minister’s decision to form such a special force during a meeting with the Interior Minister’s Assistant for Human Rights Hussein Fikry, officials from the ministry’s community outreach department, and four female officers from the force. According to Fikry each team of 10 qualified officers in the special unit would be concerned with cases of sexual harassment as well as all other forms of violence against women, and provide psychological support to the victims of such violence. [Egypt Independent, 5/22/2013]

Al-Azhar to send convoys to combat extremism
Grand Imam of al-Azhar Ahmed al-Tayeb announced that al-Azhar will be sending out convoys throughout Egypt to spread moderate Islamic thought, and to right misconceptions and destructive beliefs, particularly in regards to violence and extremism. The convoys will focus on spreading correct values and behaviors, and denouncing corruption, as well as seeking  to defend Islam and its holy sites and to take a stand against attempts to infiltrate Egypt’s Sunni institutions with Shi’a thinking. [DNE, 5/22/2013]

Q&A with US Ambassador to Egypt Anne Patterson
In an interview with Ahram Online, US Ambassador to Egypt Anne Patterson discussed several issues including IMF loan negotiations, US aid to Egypt and the post-revolution US-Egypt relation, post-revolution politics, Syria and human rights issues in the country. “We think the IMF agreement needs to be concluded as soon as possible. There is a greater chance democracy will succeed with economic recovery. It is very hard for democracy to succeed if the economy is in bad shape,” she said. Commenting on the recent cabinet reshuffle, she added, “There is a high degree of political polarization, and thus a need for more dialogue and compromise. The Egyptian state needs technocrats and competent people. I doubt the reshuffle will satisfy the opposition. Egyptians need to work this out themselves.” [Ahram Online, 5/22/2013]