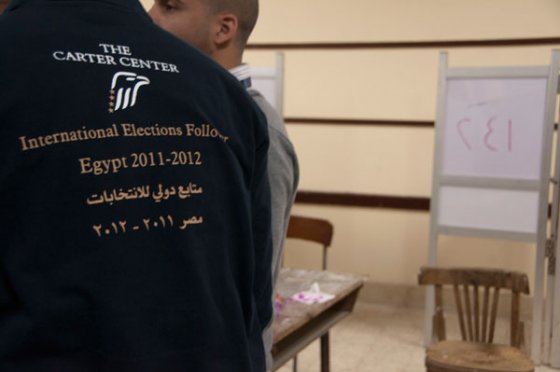 The Ministry of Social Affairs denied the requests of eight American NGOs seeking permission to operate in Egypt. One of the NGOs is the Carter Center, which was seeking to deploy observers to monitor the presidential election.

1) Following mass demonstrations on April 20 in Tahrir Square, Field Marshal Tantawi renewed the SCAF’s assurances that power will be transferred to an elected civilian president chosen by the people, saying, “We are not politicians.” [al-Ahram, English, 4/23/2012] [al-Masry al-Youm, Arabic, 4/23/2012]

2) The Supreme Presidential Electoral Commission (SPEC) announced on April 22 that Egyptian civil society organizations registered with the Ministry of Social Solidarity will be allowed to monitor the upcoming presidential election, while the potential role of foreign observers is still under discussion. The presidential election is scheduled to take place on May 23 and 24, and the president will be named on 21 June after a runoff voting round on June 16-17. [al-Ahram, English, 4/23/2012]

3) The Muslim Brotherhood criticized the Supreme Presidential Electoral Commission (SPEC) for reiterating a ban on the use of the religious slogan “Islam is the solution,” in the upcoming presidential election, saying the decision “calls into question [the SPEC’s] neutrality.” [al-Masry al-Youm, Arabic, 4/23/2012]

4) Parliament has proposed a significant expansion of a draft disenfranchisement law to include many more high-level officials who were “corrupt” or used their political position for their own benefit during Mubarak’s rule. The first draft barred only a limiting number of former officials who served in top positions from competing in the presidential election, while the amended version includes any public servant, minister, and member of Parliament, Shura Council or local council who spread “corruption in Egypt’s political life” or “harmed the national interest” after November 1973. [al-Ahram, English, 4/23/2012]

5) Socialist presidential candidate Abul Ezz al-Hariri warned against what he described as attempts by the Muslim Brotherhood to “swallow the state and society” as well as “to classify Egyptians along sectarian lines as a means to mobilize voters in the elections.” [al-Masry al-Youm, English, 4/23/2012]

8) The Ministry of Social Affairs denied the requests of eight American NGOs seeking permission to operate in Egypt. One of the NGOs is the Carter Center, which was seeking to deploy observers to monitor the presidential election. [al-Masry al-Youm, English, 4/23/2012]

9) Egypt’s interim government has canceled the national cup competition, ending all soccer in the country this season. League games were called off last month after 74 people were killed in fan clashes at a stadium in Port Said. [AP, English, 4/23/2012]

10) Israel Foreign Minister Avigdor Lieberman says Cairo’s decision to terminate the gas deal should be understood as trade dispute rather than a diplomatic one.  The Egyptian company EGAS confirmed on April 23 the termination of the 20-year-old contract, under which Egypt supplied 40 per cent of Israel’s natural gas. Knesset opposition leader Shaul Mofaz said the move calls for an “immediate American response” and Finance Minister Yoval Steinitz said the decision could have serious political and economic implications for the Camp David Accords. The gas pipeline carrying gas from Egypt to Israel and Jordan has been sabotaged 14 times since the resignation of former President Hosni Mubarak. [YNet, English, 4/23/2012] [al-Ahram, English, 4/23/2012] [al-Ahram, English, 4/23/2012]