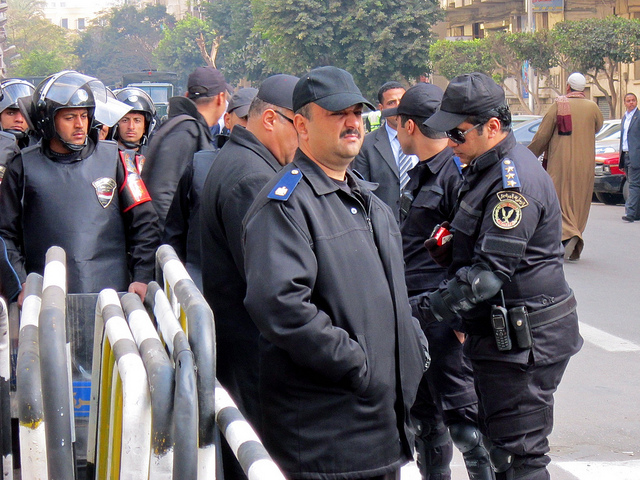 The Egyptian government, headed by Prime Minister Hisham Qandil, agreed in principle on Wednesday on a draft law, proposed by the interior ministry, whose aim is to confront crimes which threaten national security, police officers as well as public and private property.

Egypt govt agrees on draft law for police; Shura passes amended political participation bill
The Egyptian government, headed by Prime Minister Hisham Qandil, agreed in principle on Wednesday on a draft law, proposed by the interior ministry, whose aim is to confront crimes which threaten national security, police officers as well as public and private property. The draft law will now be referred to the legislative committee of the Shura Council. Meanwhile, on Tuesday, the Shura Council’s legislative committee approved amendments proposed by the Supreme Constitutional Court (SCC) to the political participation bill. The legislative committee approved all the SCC’s amendments to the political participation bill, including an article which states that elections should be fully monitored by the judiciary. The legislative committee also approved an article banning electoral campaigning based on religious, sexist, or ethnic slogans or symbols or any slogans which might threaten national unity. The committee also cancelled articles in the bill requiring private-owned media to dedicate equal coverage to all candidates. The article preventing military and security personnel from voting was amended based on recommendations by the Armed Forces. Although the SCC deemed the exclusion of military and police from voting unconstitutional, the Armed Forces’ proposition postponed allowing personnel to vote until July 2020. [Aswat Masriya, DNE, Shorouk (Arabic), 6/12/2013]

Former State Security head, forty others acquitted
A Giza Criminal Court on Wednesday acquitted Hassan Abdel Rahman, the former head of the dissolved State Security Investigations Service (SSI), and forty other current and former police officers accused of shredding, burning and destroying State Security documents during and after the 2011 uprising. In its final statement before the court, the defence argued that defendants actually protected their country through their actions during the revolution, even going so far as to dub them "heroes." The court was due to issue its reasoning for the acquittal later on Wednesday. [DNE, Egypt Independent, Aswat Masriya, El Watan (Arabic), Reuters, 6/12/2013]

Internal debt swells, while market sees rebound after months of losses
The latest indices of domestic public debt hit an alarming EGP 1.387tn (about $200bn) in April, posing a threat to the general treasury and causing an economic slowdown, experts warn. Debt rose unprecedentedly since March last year, reaching EGP 1.089tn, or 80 percent of the nation’s GDP, the Ministry of Finance said in a report published in March. Meanwhile, Egypt’s bourse finished yesterday’s transaction in the green zone for the first time this week driven by a wave of purchases by both foreign non-Arabs and Arabs investors targeting blue-chips. The benchmark index EGX 30 rose 1.52 percent to reach 4848.06 points, while the broader index for small and medium sized enterprises (SMEs), the EGX 70, declined by 0.52 percent. [DNE, Ahram Online, 6/11/2013]

PM Qandil denies fuel shortages facing Egypt
Prime Minister Hisham Qandil has denied fuel shortages are causing trouble on the Egyptian markets, the same week frustrated consumers protested across the country over dwindling supplies. “The crisis was created by opportunists,” he told the state MENA news agency. “They want to disrupt the smart cards system,” referring to the government’s latest initiative to tackle the problem. For months Egypt has faced an energy crisis affecting industry, transport and power infrastructure, triggering protests and long queues outside gas stations in governorates across the country. Speaking at a news conference in Cairo on Tuesday, Qandil blamed the former regime for the current crisis. “It did not utilize energy in an optimum way,” he said. [Egypt Independent, 6/12/2013]

Culture Ministry protest attacked
Artists and activists protesting against the influence of Islamists in Egypt’s culture ministry clashed with religious supporters of the president on Tuesday, leaving several people wounded, witnesses and officials said. Filmmakers, writers, intellectuals and activists have been occupying the ministry in Zamalek since last Wednesday to protest the dismissal of key ministry officials which they claim is part of a plan to ‘Brotherhoodize’ the ministry – a charge the minister denies.[DNE, Ahram Online, Shorouk (Arabic), Reuters, 6/12/2013]

NGOs prepare campaign against FGM, UN Agencies tell Egypt to enforce ban
Prosecutors in the Nile Delta governorate of Daqahliya on Tuesday released the doctor accused of causing the death of a girl during a female genital mutilation (FGM) operation. Soheir Mohamed al-Batea, 13, died on Thursday after undergoing the operation, illegal since 2008, performed by Dr Aslan Fadl. U.N. agencies have called for the prosecution of an Egyptian doctor after a 13-year-old girl died while undergoing female genital mutilation at a private clinic. The coalition consists of 20 civil society groups working with volunteers to combat FGM and educate families across the country about the dangers of the practice and the negative impact it can have on girls’ health as well as family stability. [Egypt Independent, Aswat Masriya, Ahram Online 6/12/2013]

Top Egypt cleric condemns "sectarian" foes in Syria
Egypt’s most senior Muslim cleric, a leading voice of mainstream Sunni Islam across the Middle East, has condemned Shi’ites for engaging in "hateful sectarian strife" in Syria. In a statement that highlighted a deepening rift in the region since Hezbollah committed itself in the Syrian civil war, Grand Sheikh Ahmed al-Tayeb also condemned the Lebanese Shi’ite militia for turning away from its struggle against Israel. [Reuters, 6/11/2013]

Ethiopia dismisses Egypt’s ‘psychological warfare’ on dam
Ethiopia dismissed Egyptian talk of military action against a giant dam it is building on the Nile as "psychological warfare", and said on Tuesday it would defend itself and carry on with the work regardless. Meanwhile, the African Union urged Egypt and Ethiopia to come together for talks to solve a bitter dispute over the sharing of Nile river waters amid Ethiopia’s building of a new dam, the AU chief said Wednesday. Egypt’s Coptic pope also held meetings on the Nile row before meeting Ethiopian counterpart. The meeting attendees discussed means of securing Egypt’s share of Nile water, along with plans to raise the issue with the patriarch of the Ethiopian Coptic Orthodox Church. The latter is scheduled to arrive in Egypt on 17 June for a four-day visit. [Reuters, Egypt Independent, Ahram Online, 6/12/2013]

Amnesty concerned over rise in blasphemy cases in Egypt
Criminal “defamation of religion” charges must be dropped in a number of cases across Egypt, Amnesty International said today after a teacher was convicted for insulting Islam and the Prophet Muhammad in the classroom. The statement came hours after Demiana Abdel-Nour, a Coptic Christian teacher, was fined LE100,000 ($14,000) by a court in Upper Egypt for insulting Islam and the Prophet Mohamed during a lesson. Amnesty had received several reports about other defendants in similar cases, mainly bloggers, media figures and Copts, especially in Upper Egyptian regions. [Ahram Online, Egypt Independent, 6/12/2013]