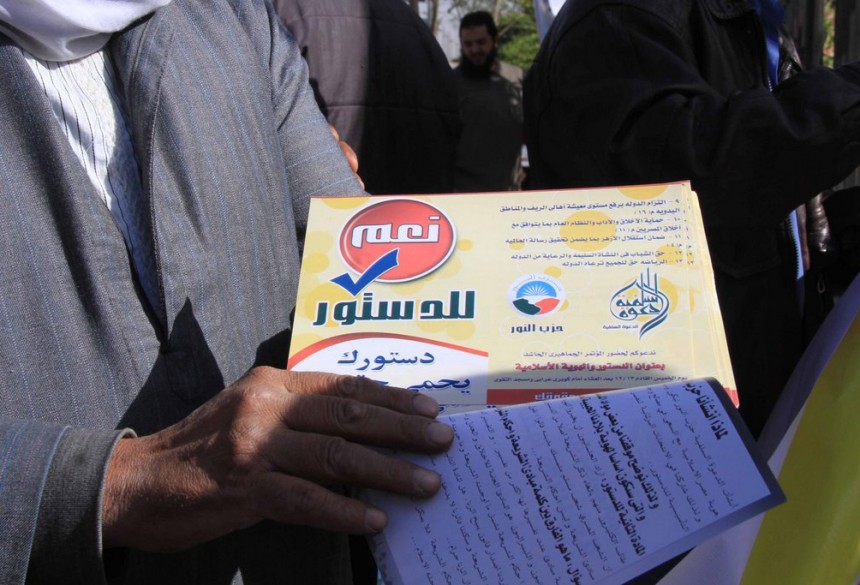 Egypt and the International Monetary Fund agreed to postpone a decision on a $4.8 billion loan that had been scheduled for discussion by the fund’s board next week, Egyptian Finance Minister Momtaz el-Saieed said.

State Lawsuits Authority agrees to supervise referendum
The State Lawsuits Authority announced it would supervise the constitutional referendum slated for 15 December, in a press conference Tuesday. The authority had announced it would not supervise the vote until President Mohamed Morsi’s constitutional declaration, which he issued on 22 November, was canceled. "Supervising the referendum is a duty that cannot be neglected," a statement said, but said that its acceptance is not mandatory for judges who do not want to take part. [Egypt Independent, 12/11/2012]

Morsi bans voting outside of assigned electoral districts
Voters will no longer be able to vote outside of their electoral districts in the upcoming constitution referendum, after President Mohamed Morsi amended an electoral law. Morsi issued an amendment to Law 73 for the year 1956 canceling the stipulation allowing voters to cast their ballots in referendums outside of their electoral districts, a presidential statement on Tuesday morning said. The amendment, which the president’s office claimed was requested by the Supreme Elections Commission, is aimed at "public interest, and for Egypt to successfully end the current transition and move on to the building of constitutionally-founded institutions." At the same time, the SEC announced that those who fail to vote will face a 500EGP (approximately $80) fine. [Egypt Independent, Ahram Online, SIS, 12/11/2012]

Presidential spokesperson blames tax debacle on political tension
“Mistakes happened over the past few days due to political conflicts,” presidential spokesperson Yasser Ali said Monday, referring to President Mohamed Morsi raising taxes on a number of commodities than freezing the tax hike only hours later. The decision to levy new taxes on goods including alcohol and cigarettes was not fully thought through because of the ongoing political crisis, Ali said during a press conference at the presidential palace. He added that Morsi decided to suspend the new taxes in order to hold a social discussion about them. [Egypt Independent, Ahram (Arabic), 12/10/2012]

Head of Egypt referendum committee threatens to quit if violence erupts
The general-secretary of the committee overseeing Egypt’s constitutional referendum on 15 December has threatened to step down if more violence erupts before or during polling. Zaghloul El-Balshi, who was appointed by President Morsi, said he had instructed judges supervising the referendum to close polling stations and go home if violence erupts during the vote. He added that there were currently 13,000 polling stations and enough judges to monitor them. [Ahram Online, AMAY (Arabic), 12/11/2012]

Free, reduced transportation for referendum day
The Transportation Ministry is reducing the price of air-conditioned train tickets by 50 percent for 15 December to encourage citizens who have to travel to vote on the constitution referendum. Housing Minister and acting Transportation Minister Tareq Wafiq also said that transportations services will be doubled on referendum day, and that passengers will be allowed to ride buses and third class train carriages for free in order to promote voting. The move comes after a presidential decree barring voters from casting ballots from outside their electoral districts. The Finance Ministry will pay the total cost difference to the Egyptian National Railways Authority. [Egypt Independent, 12/11/2012]

Egypt, IMF Agree to Delay Loan Decision, Finance Minister Says
Egypt and the International Monetary Fund agreed to postpone a decision on a $4.8 billion loan that had been scheduled for discussion by the fund’s board next week, Egyptian Finance Minister Momtaz el-Saieed said. “The IMF board was supposed to review Egypt’s request Dec. 19 and it has been agreed with the fund that this be delayed to the following session, most likely mid-January,” el-Saieed said by phone from Cairo. “We have an Egyptian economic and social program, and it seems that some have misunderstood the measures, so the president decided to give more time for social dialogue to stress that the measures won’t harm people with limited income.” [Bloomberg, Reuters, AMAY (Arabic), 12/11/2012]

Manpower Ministry: Fewer labor strikes in first week of December
Only five labor strikes were staged in five governorates across the country from 2 to 9 December, of which four were already resolved, the Ministry of Manpower and Immigration announced on Monday. Last week’s strikes were staged in demand for better wages and bonuses, or the disbursement of overdue payments, the ministry’s report said. [Egypt Independent, 12/11/2012]

Morsi’s supporters and opponents to stage protests Tuesday
Political forces, including the National Salvation Front, will march to the presidential palace from a number of prominent squares and mosques around Cairo Tuesday as part of a "million man" protest. The demonstrations will demand the cancellation of the constitutional referendum slated 15 December and protest against the new constitutional declaration, which President Mohamed Morsi issued on Saturday. The marches will head to the palace from locations in Nasr City, Abbasseya and Heliopolis, according to state-run TV’s website Egynews. [Egypt Independent, Ahram Online, EGYNews (Arabic) 12/11/2012]

Military arrest powers was called for by SEC: Morsi spokesman
Granting the military the power of arrest during the upcoming constitutional referendum period – powers previously limited to police – came at the request of Egypt’s Supreme Electoral Commission, presidential spokesman Yasser Ali said Monday. The legislation aims to secure the voting process and will expire once results of the referendum are announced. [Ahram Online, SIS, 12/11/2012]

Al-Qaeda leader calls on Abu Ismail to reignite the revolution
Al-Qaeda leader Ayman al-Zawahiri posted a YouTube video on Monday urging Salafi leader Hazem Salah Abu Ismail and his supporters to reignite the revolution, which he claimed had been manipulated and aborted by other parties. Abu Ismail, an ultra-conservative who preaches a strict interpretation of Islam, emerged in early 2012 as one of the frontrunners for the first presidential vote since the fall of former President Hosni Mubarak. The electoral commission barred him from running because his late mother allegedly had a US passport. [Egypt Independent, DNE, 12/10/2012]

Army prepares to secure constitutional referendum
The Armed Forces on Monday began to deploy troops in Cairo and other governorates to secure polling stations for Saturday’s constitutional referendum. The deployment comes after President Mohamed Morsi on Sunday gave the military the authority to arrest civilians until the result of the referendum is declared. Under Morsi’s order, the military would support the police and liaise with them to protect “vital institutions.” The decree gave army officers the right to make arrests and transfer detainees to prosecutors. [Egypt Independent,12/10/2012]

Egypt criticizes quartet’s role in peace process
Foreign Minister Mohamed Kamel Amr criticized the Quartet on the Middle East’s role in the regional peace process, calling it “a total paralysis” and reiterating Egypt’s condemnation of Israeli settlement activities as a blow to the two-state solution for the Palestinian-Israeli conflict.
A ministry statement on Monday 10/12/2012 quoted Amr’s remarks, which he made during a ministerial meeting on Sunday 9/12/2012 by the Arab Peace Initiative follow-up committee in Doha. [SIS, 12/11/2012]