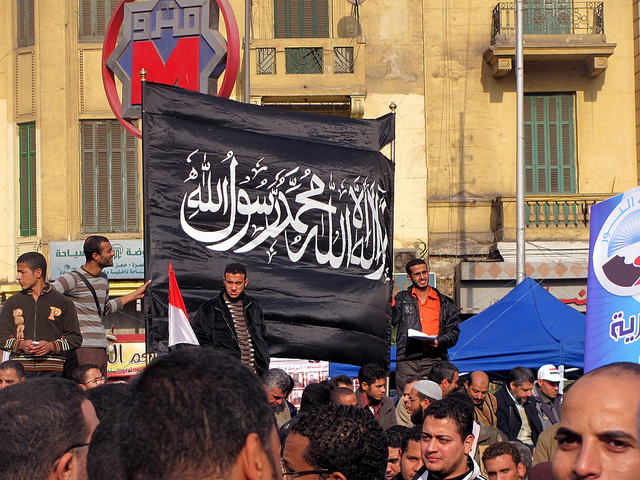 Egypt presidency’s civil society bill ‘hostile to freedom’: NGOs
Forty Egyptian NGOs on Tuesday issued withering criticisms of a new draft law regulating NGO activity, asserting that the bill sought to "cement full administrative control over all aspects of civic action" in Egypt. The NGOs articulated their concerns in a joint statement entitled, "The Muslim Brotherhood lays the foundations for a new police state by exceeding Mubarak-era mechanisms to suppress civil society." Presidential aide Pakinam al-Sharqawi brushed off critics, saying that, “Attacking the draft law on associations without seeing it reflects a lack of confidence, which obscures the facts, and renders some as prisoners of fear and negative expectations." [Ahram Online, Shorouk (Arabic), 5/31/2013]

NCW head condemns calls for its dissolution
Shura Council member and leader of the Salafist Asala Party Adel Afifi on Thursday called for the dissolution of Egypt’s National Council for Women (NCW), al-Ahram’s Arabic-language news website reported on Thursday. Afifi also called for dividing the dissolved NCW’s budget between Egypt’s National Council for Human Rights (NCHR) and National Council for Childhood and Motherhood (NCCM). Mervat al-Tallawy, NCW head, condemned calls for the NCW dissolution, saying that they are an attempt to keep women out of public life and put an end to their participation in politics. [Ahram Online, Shorouk (Arabic), 5/31/2013]

Law combating violence against women submitted to Presidential Legal Committee
Presidential advisor for women’s affairs, Dr. Omayma Kamel said that a draft law protecting women has been submitted to the president’s legal advisory committee, after which it can be submitted to the Legislative Committee. She said that the law, part of a presidential initiative to support the rights and freedoms of women, aims to protect women from domestic and public violence, adding that security is only one issue to address in order to resolve the problem. [EGYNews, ONA (Arabic), Shorouk (Arabic), 5/31/2013]

Egypt Islamist parties call for SCC’s dissolution, judges begin strike
Six Islamist-leaning political parties on Thursday condemned recent calls by Egypt’s Supreme Constitutional Court (SCC) to grant military and police personnel the right to vote in national elections. The six parties included the Muslim Brotherhood’s Freedom and Justice Party, the Building and Reconstruction Party, the Tahrir Revolutionaries Party, the Socialist Work Party, the New Labor Party and the Wasat Party. In a Thursday joint statement, the six parties called for holding a national referendum on whether or not the SCC should be dissolved. Meanwhile Judges’ Club Ahmed al-Zind said that all members of judges’ clubs and members of the general prosecution will begin an open-ended sit-in Friday until the Shura Council halts discussion of the judicial authority law. [Ahram Online, Shorouk (Arabic), Aswat Masriya, 5/31/2013]

Egypt converts Qatari funds into 18-month notes – CBE governor
Egypt has converted $2.5 billion that Qatar lent it in December into 18-month notes and is working to convert another $3 billion lent this month into three-year bonds, Egypt’s central bank governor was quoted on Thursday as saying. The 18-month notes, which mature on Nov. 28, 2014, will pay 4.25 percent annual interest, according to data on the website of the Irish Stock Exchange where they are listed. Qatar has lent or given Cairo $7.5 billion since Mohamed Morsi of the Muslim Brotherhood was elected president last June. [Reuters, 5/30/2013]

Suspect in kidnapping of Egyptian security men arrested
Egyptian authorities have arrested a first suspect in connection with the kidnapping of seven security men two weeks ago by Islamist militants in Sinai, security sources said on Thursday. Police tracked down the internet café from which the kidnappers from the Sinai hostage crisis uploaded the video of their demands and arrested the café owner, the Ministry of Interior announced Wednesday. The owner was also arrested but later released. Waleed Saleh al-Nekhlawy, 23, is being held in police custody pending investigation for his suspected role in the kidnapping and uploading a video of the men while they were in captivity, one source said. [Reuters, DNE, Ahram (Arabic), Shorouk (Arabic), 5/31/2013]

US releases Country Reports on Terrorism
The US State Department’s annual report on terrorism has said that while Egypt has struggled to combat terrorism, the country’s security services did have some success. The report on Egypt noted all of the terrorist incidents that occurred inside Egypt during 2012. The report highlighted, “nearly all terrorist incidents involved attacks on security forces – Egyptian, Israeli, or international – guarding or monitoring the Sinai, its state infrastructure, and its border with Gaza and Israel”. The report highlights smuggling of weapons and explosives as an issue in Egypt, stating that “Egypt’s Northern Sinai region remained a transit route for smuggling arms and explosives into Gaza, as well as a base and transit point for Palestinian violent extremists”. [DNE, US State Department, AMAY (Arabic), 5/31/2013]

Al-Azhar to ‘counter extremism’ with own TV channel
Al-Azhar, Egypt’s leading seat of Islamic learning, is planning to launch its own television channel. The channel will promote a moderate version of Islam, Grand Imam Ahmed al-Tayeb said on Thursday. It will be trialed in July to coincide with Ramadan and will feature social, cultural and historical programs alongside its main religious content, al-Tayeb said. There have been mounting calls for a channel monitored by the 1000-year-old Islamic authority to combat the growing number of Islamic channels spouting extremist rhetoric.[Ahram Online, 5/30/2013]

Egypt’s image of Africa needs to improve: Morsi’s advisor
Egypt’s foreign policy advisor to the presidency, Essam Haddad, stated late Wednesday that "If Egypt’s strategic foreign policy puts Africa as a priority, then bilateral Egypt-Ethiopia relations come at the core of this issue." A statement published on Haddad’s Facebook page described Ethiopia as a crucial country in the African continent with which Egypt needs to reassert ties. Minister of Irrigation and Water Resources Mohamed Bahaa al-Din has dismissed accusations placing the blame on Prime Minister Hisham Qandil’s cabinet in the crisis saying that the government was aware of its construction over the past year and a half. PM Qandil met with his Ethiopian counterpart on the margins of the African development conference in Japan to discuss the issue. Meanwhile, Sudanese sources say that Ethiopia has agreed to modifications of the dam that would satisfy all three countries. A final report will be issued on Saturday. [Ahram Online, DNE, EGYNews, Aswat Masriya, Shorouk (Arabic), Shorouk (Arabic), 5/31/2013]

US concerned by ‘legislative restrictions’ in draft NGO law
The United States State Department has expressed concern over the draft NGO law that was submitted to the Shura Council last Wednesday. Speaking at a daily press briefing in Washington DC on Thursday, the spokesperson for the State Department, Jen Psaki, pointed to “legislative restrictions… on the activities of NGOs would damage [not only] Egypt’s international image but also the ability of NGOs to provide the necessary assistance to the people in the country”. Psaki also pointed out that the US has “had longstanding concerns regarding the restrictive nature of previous drafts”, adding that “we have urged the government in consultations with civil society to revise the draft in accordance with Egypt’s international obligations”. [DNE, 5/31/2013]

Egypt condemns further Israeli settlements
Minister of Foreign Affairs Mohamed Kamel Amr has condemned Israel’s decision to approve more than one thousand new homes for Israeli settlers in East Jerusalem. Amr also pointed to “repeated Israeli incursions of al-Aqsa Mosque”, saying this expresses “contempt for the international community and the feelings of millions of Muslims”. Meanwhile, President Meanwhile, Mohamed Morsi held a meeting with Head of al-Quds International Institution Hamid al-Ahmar on ways to counter ‘Judaization’ of al-Quds (occupied East Jerusalem). During the meeting, Morsi reiterated support for the Palestinian cause and for efforts to realize reconciliation between Palestinian rivals Hamas and Fatah, said a statement by presidency. [SIS, DNE, ONA (Arabic), 5/31/2013]