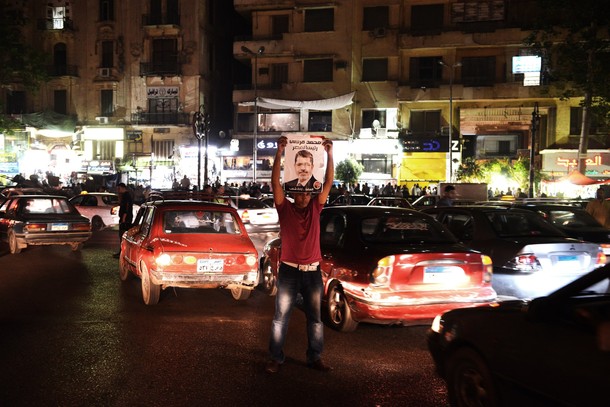 Egypt’s military has shown no sign of opposing the president’s surprise decision to retire the defense minister and chief of staff and seize back the powers the military grabbed from his office. Nearly a full day after the order, no unusual military movements were reported anywhere across the nation.

[Egypt Independent, Al Sharq Al Awsat (Arabic), 8/13/2012] In an unprecedented reshuffle of the 19-member SCAF, Morsy replaced Tantawi, who has been defense minister for 22 years, with current Military Intelligence Chief Abdel Fattah al-Sisi who was promoted two ranks and now heads the ministry and the armed forces, the presidency’s spokesperson Yasser Ali announced on Sunday. The president also promoted Sidqy Sobhy, the third field army leader to be the military chief of staff, while Mohamed al-Assar was appointed as deputy defense minister. Additionally, Head of Naval Forces Mohab Mamish was assigned as leader of the Suez Canal Authority. Political and military experts say that Morsy’s radical decision to cast aside Tantawi and Anan, who remained on top of the military institution for decades, indicates that the president is consolidating his power over the military establishment in a tactful manner, without necessarily ending the legacy of the military state.

[AP, 8/13/2012] Egypt’s military has shown no sign of opposing the president’s surprise decision to retire the defense minister and chief of staff and seize back the powers the military grabbed from his office. Nearly a full day after the order, no unusual military movements were reported anywhere across the nation. The official news agency quoted an unnamed military official late Sunday as saying there has been no "negative reaction" from within the military.

[Egypt Independent, 8/13/2012] Mohamed Fouad Gadallah, legal adviser to Egyptian President Mohamed Morsy, has said that former Defense Minister and interim ruler of Egypt Mohamed Hussein Tantawi and former army chief Sami Anan had not been aware of Morsy’s decision to remove them on Sunday. Gadallah said Morsy expressed gratitude to the pair for their time in service.

[EGYNews (Arabic), 8/13/2012] The governance committee of the Constituent Assembly agreed to a form of government similar to the mixed French system, a version closer to a presidential system, such that the President and the Prime Minister share the powers of the executive branch. The president would remain responsible for national security, the prime minister for internal affairs. Dr. Mohammed Mohieldin, a rapporteur for the committee, also said the legislature would be renamed to the House and Senate, where the House would discuss the general budget, draft laws, and taxation, while the Senate would approve presidential appointments, and strengthen the decentralization and management local communities.

[Reuters, EGYNews (Arabic), 8/13/2012] A group of armed men shot dead a tribal leader and his son on Monday in Egypt’s Sinai peninsula on the border with Israel, a security source said, as violence escalated on the sixth day of a military crackdown on militants in the area. Tribal leader Khalaf Al-Menahy and his son were shot dead by militants on their way back from a conference organised by tribal leaders to denounce militancy," said the security source in Sinai.

[Ahram Online, 8/13/2012]Qatar should deposit $500 million in Egypt’s central bank within a week, the Egyptian finance minister said, as the country battles to pull its economy out of a tailspin after 18 months of political turmoil. The Gulf emirate said on Saturday it would deposit $2 billion in all. Speaking on Sunday, Finance Minister Momtaz El-Saeed said officials had also discussed with a Libyan delegation that Tripoli might support Egypt’s depleted finances.

Ministry of Finance to be responsible for electricity and export subsidies

[Daily News Egypt, 8/13/2012] Minister of Trade and Industry, Hatem Saleh, has handed responsibility for his electricity and export subsidies dossiers to Minister of Finance, Momtaz El-Saeed. El-Saeed plans to increase subsidies for the export sector from EGP 3.4 to 3.5 billion; EGP 600 million of which was approved in the state budget by the former cabinet and a further EGP 400 million which has been provisionally approved by the Ministry of Finance (MOF), according to an inside source.

[Reuters, Al Shorouk (Arabic), 8/13/2012] Israel is watching "with great concern" the developments in Egypt where Islamist President Mohamed Morsi ousted his powerful defence minister and army chief following a deadly attack in Sinai. "Military cooperation is more necessary than ever to re-establish order along the border and in Sinai. The new leadership in the Egyptian army knows that, but the question is what does the Egyptian leadership want," an Israeli government official said on condition of anonymity.

[Reuters, 8/13/2012] The Islamist group Hamas, stunned by Egypt’s closure of its border with Gaza, said on Monday the new Islamist leadership in Cairo was imposing the same pain on the Palestinian enclave as ousted former president, Hosni Mubarak.

Morsi to travel to Saudi Arabia to participate in Islamic Summit

[EGYNews (Arabic), 8/13/2012] President Mohamed Morsi will travel on Tuesday morning to Saudi Arabia to participate in the Islamic Summit Conference, hosted by Mecca, to discuss over two-days of meetings the challenges and risks facing the Islamic countries in the modern era. The meeting of leaders and elders of Muslim countries aim to develop solutions to meet those challenges and unite the Muslim communities.