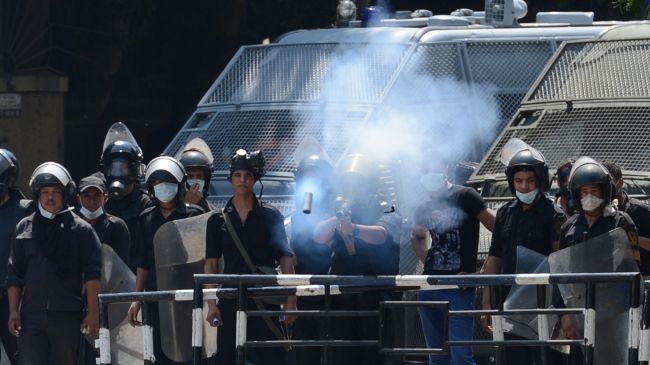 Egypt’s government has drafted a law to combat “political thuggery,” in what it describes as an attempt to “protect the revolution and the society” from criminals and achieve security and stability, state-run Ahram newspaper reported today.

Egypt Prepares Draft Law on ‘Political Thuggery,’ Ahram Says
Egypt’s government has drafted a law to combat “political thuggery,” in what it describes as an attempt to “protect the revolution and the society” from criminals and achieve security and stability, state-run Ahram newspaper reported today. The draft law criminalizes causing damage to buildings, historical monuments and other public property, disrupting traffic and transportation, obstructing work at public interest facilities, and violation of the freedom to work, Ahram said. [Bloomberg, Ahram (Arabic), 10/15/2012]

Morsi politely ‘asks’ defiant prosecutor-general to stay on
After a tense 48-hour standoff between President Mohamed Morsi and the judiciary, the head of the state has seemingly allowed Egypt’s prosecutor general to remain in his post. Early news reports indicated that Mahmoud’s departure had been all but sealed. However, within hours of the announcement he would work as Egypt’s ambassador to the Vatican, Mahmoud released a statement denying he agreed to leave his office insisting that the president does not have a constitutional right to dismiss him. [Ahram Online, 10/13/2012]

We don’t need the Brotherhood, they need us: Salafist Nour Party spokesman
Egypt’s Salafist Nour Party witnessed a dramatic split in the last month, as warring factions battled it out over the party presidency. Internecine squabbles culminated on 26 September, when the Supreme Committee withdrew confidence from their president Emad Abdel-Ghafour, who, in turn, attempted to sack the decision-making body. Ahram Online talks to spokesman Nader Bakkar – whose own job was on the line last week – about the party’s future. [Ahram Online, 10/15/2012]

Egypt: Liberal Forces Demonstrate Again Friday
Two liberal parties have announced a demonstration on Friday under the slogan "Egypt is not anyone’s private property. Egypt is for all Egyptians", in response to last weekend’s clashes. The Dostour Party, founded by former director of the International Atomic Energy Agency, and the Popular Current, founded by ex-presidential Nasserist activist Hamdeen Sabahi, issued a statement on Sunday calling for all Egyptians to participate in next weekend’s demonstration. [allAfrica, 10/14/2012]

New Egyptian Constitutional Front seeks signatures for petition
The Egyptian Constitutional Front (ECF) will launch a campaign on Monday aiming to defend the rights and freedoms of Egyptians in the new constitution. The ECF, launched two weeks ago, is a group of human rights activists and lawyers championing basic rights in Egypt’s upcoming constitution. The group positions itself as a force against the dominance of the Islamist influence within the Constituent Assembly and its drafting process. [Ahram Online, 10/15/2012]

Constituent Assembly to release final draft constitution within three weeks
The final draft of the constitution is set to be put up for public debate within three weeks, Constituent Assembly member Bassam al-Zarqa said. “I prefer to call it heralds of a constitution rather than final draft,” Zarqa said. He explained that the assembly is holding a community dialogue to reach consensus on all articles and avoid polarization during the referendum. Assembly member Younis Makhyoun said the referendum would take place within two months. [Egypt Independent, 10/15/2012]

Egypt Probes Military Rulers For Protest Deaths
An Egyptian court official says authorities have launched a civilian investigation of the country’s former military transitional rulers for their alleged role in the killing of protesters during their 18 months in power. The official said Monday that an investigative judge was assigned to look into accusations against officers including the head of the ruling military council, Field Marshal Hussein Tantawi. It would be the first time that Tantawi and other members of the Supreme Council of the Armed Forces are investigated for the deaths of protesters in clashes with security forces and soldiers. [AP, 10/15/2012]

Govt details fuel subsidy rationing
Egypt’s government plans to cut energy subsidies by setting a universal limit on how much cheap fuel and cooking gas every household can buy, Petroleum Minister Osama Kamal told a newspaper on Sunday. Economists say the IMF will not release a $4.8 billion loan until Egypt shows how it will cut a deficit that ballooned after a popular uprising tipped the economy into crisis last year. The plan outlined by Kamal in an interview with newspaper Shurouk would mean both rich and poor receive the same allocation of the subsidised fuel and would then pay a higher price for additional amounts consumed. [Reuter, Shorouk (Arabic), 10/14/2012]

Egypt’s Muslim Brotherhood denies responsibility for Tahrir violence
The Muslim Brotherhood has pointed finger at unknown assailants for Friday’s violence in the iconic Tahrir square after clashes erupted between its members and liberal protesters. In a statement posted on its official website, the Brotherhood said that “thugs” wearing T-shirts bearing the slogan of the Islamist group’s Freedom and Justice Party (FJP) "committed these crimes", referring to the violent attacks against demonstrators. "Other thugs could be seen coming from Mohamed Mahmoud Street to destroy a podium in Tahrir and make it seem as though it was the Brotherhood’s responsibility," the statement read. [Ahram Online, 10/13/2012]

Egyptian police torture 88 and kill 34 under President Morsi: Rights report
In a recent report published by the Cairo-based Nadim Centre for the Rehabilitation of Torture Victims, 34 cases of death, 88 cases of torture, and seven cases of sexual assault at the hands of Egyptian police were recorded during Egyptian President Mohamed Morsi’s first 100 days in office. In the time period cited, the report recorded a total of over 247 cases of alleged police brutality. The report states that at least 34 people were killed by police in police stations, prisons and in public areas. According to the report, the killings were generally the result of live ammunition used to disperse protesters. [Ahram Online, 10/15/2012]

Egypt’s striking doctors threaten to submit resignations en masse
Egyptian doctors, who have been waging a partial strike since 1 October, are now ratcheting up pressure on Egypt’s health ministry by threatening to submit their resignations en masse. According to the strike’s general committee, at least 15,000 doctors’ resignations will be tendered within coming days if their demands go unmet. Strikers have been calling for 15 per cent of the state budget to be allocated to public health (up from the current 5 per cent), salary increases for doctors, and security upgrades at Egypt’s hospitals and medical centres, which have been the targets of recent attacks. [Ahram Online, 10/14/2012]

PM, Malaysian Trade Minister Discuss Free Trade Agreement
Prime Minister Hisham Qandil received on Saturday 13/10/2012 Malaysian Minister of Industry and Foreign Trade Mostafa Mohamed within the framework of boosting joint cooperation between the two countries in the trade and industrial fields. The meeting was attended by Minister of Industry and Foreign Trade Hatem Saleh. At a press conference with the Malaysian minister, Saleh said that Qandil was invited to attend the Economic Cooperation Conference of the Islamic Countries in Malaysia. [allAfrica, 10/14/2012]