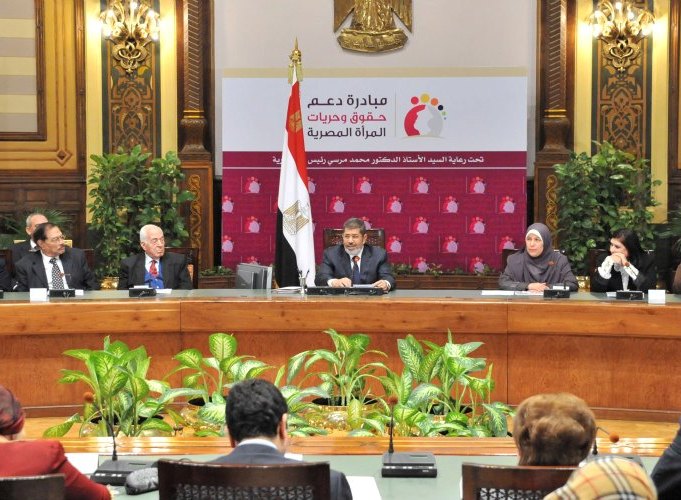 President Mohamed Morsi has denounced Friday’s attacks on Muslim Brotherhood offices and called for action against politicians found guilty of inciting the violence.

Egypt president warns opposition against ‘promoting violence
President Mohamed Morsi has denounced Friday’s attacks on Muslim Brotherhood offices and called for action against politicians found guilty of inciting the violence. “If investigations prove politicians are guilty [of incitement], the necessary action will be taken against them despite their status,” President Morsi said. "Whoever is found to be involved in promoting violence through the media will not escape punishment," he warned. He added, “You’d be angry at me if I punished the media personalities who describe the opponents in the street, who practice violence, as revolutionaries and politicians. I’ve been patient so far.” On Friday, Morsi made several statements through his Twitter account, saying Egypt’s "enemy" abroad is trying to divide Egyptians, but will fail to do so. [Ahram Online, Egypt Independent, Aswat Masriya, SIS, Reuters, El Watan (Arabic), 3/24/2013]

Widespread condemnation of Moqattam violence
Following Friday’s clashes surrounding the Muslim Brotherhood headquarters in Moqattam, several political parties and movements, as well as members of the Shura Council have condemned the violence which erupted between citizens supporting and opposing the Muslim Brotherhood’s rule. The Freedom and Justice Party (FJP) condemned what the attack, and said opponents have taken to violence after proving incapable at politics, a day after vicious clashes outside the Islamists’ headquarters. The Brotherhood added it could have physically bested the ‘perpetrators’ who beat up members of the Islamic group at its main headquarters, but abstained from such an engagement "for the greater good." The Brotherhood has vowed to legally pursue all who took part in the protest. Egypt’s prominent Salafist figure and founder of al-Raya Party Hazem Salah Abu-Ismail said that protesting at the offices of liberal parties and politicians has become "an urgent necessity." Galal al-Morra, secretary general of the Salafi-oriented Nour Party, called on the National Salvation Front (NSF) to consider Egypt’s interests and not to politically support “saboteurs and killers.” April 6, Mohamed ElBaradei, the NSF, the cabinet, the Ministry of Endowments and the Shura were among those who condemned the violence. The NSF, ElBaradei and Constitution Party held the Muslim Brotherhood and presidency responsible for the violence. [DNE, Ahram Online,  Aswat Masriya, Egypt Independent, SIS, 3/24/2013]

NGO, Demonstrations law agreed upon ‘in principle’
The Shura Council agreed in principle during its Sunday session to the law proposal governing civil society organisations operating in Egypt. The agreed on proposal was submitted by the council’s Human Development Committee. Meanwhile the cabinet of ministers is planning to submit another law proposal for the same cause. Sunday’s session witnessed arguments between several Shura members, some criticising the cabinet for not submitting necessary laws to the council, while others insisting that the council has full authority to legislate without the interference of governmental ministries. The Human Rights Committee also announced at its meeting on Monday its agreement in principle on a draft law to protect the right to demonstrate as submitted by the government. Dr Azzedine Komy Commission Agent, that the Commission is currently preparing a report on the law, to discuss during the plenary. [DNE, SIS, Shorouk (Arabic), Watan (Arabic), 3/25/2013]

Study: 85% of women do not feel a political party represents them
A study conducted by market research company TNS shows that from a sample of 500 women from different social classes, in regards to political representation, 85% of women feel that there is no political party that represents their views and opinions. President Mohamed Morsi announced a new initiative to support Egyptian women’s rights which aims to expand the role of women and resolve their most pressing challenges. The National Salvation Front (NSF) also announced the establishment of a permanent committee tasked with defending women’s rights. The NSF did not attend the presidential initiative on women’s rights, and criticized the presidency’s initiative to support women rights for ignoring the National Council for Women (NCW), considering this an attempt to create an alternative body to the council. In related news, Salafi group al-Gabha al-Salafiya stirred controversy when it called upon the Shura Council to “quickly discuss a new law for the formation of the NCW which would put it under the [Shura] Council’s auspices”.  [DNE, Aswat Masriya, El Watan (Arabic) 3/24/2013]

Egypt court postpones verdict on parliamentary election
The Supreme Administrative Court (SAC) on Sunday postponed its verdict on appeals against the suspension parliamentary elections until 7 April. The verdict was delayed to enable the presidency, the head of the Shura Council and the justice ministry time to show they had authorised the Egyptian State Lawsuit Authority to submit the appeal on their behalf. The appeals were submitted by the Egyptian State Lawsuit Authority on behalf of the presidency, and by former MP Mohamed al-Omda. [Ahram Online, DNE, Aswat Masriya, Egypt Independent, 3/24/2013]

Courts set verdict sessions for ‘slander’ cases
The Supreme Administrative Court has set 6 April to consider a lawsuit demanding that Bassem Youssef’s popular comedy show "al-Bernameg" be banned. The plaintiff, lawyer Mahmoud Hassan Abu al-Enin claimed that the show is “against Islamic ​​and Arab values, and against the principles of organizing satellite broadcasting, which obliges [one] not to negatively influence social peace, national unity and public morals” and violates Articles 31 and 81 of the Constitution. In a related case, the “NileSat” Company had halted the broadcast of some satellite television channels according to reports from the Media Ministry saying its content should be censored, yet the Administrative Court suspended the decision on basis of the lack of jurisdiction. [DNE, Egypt Independent, Aswat Masriya, SIS, 3/24/2013]

Energy subsidies to be lifted in three years: Hatem Saleh
Energy subsidies will be gradually lifted in the coming three years, raising the price of energy except for factories that have a social dimension, said Hatem Saleh the minister of industry and foreign trade. “The state bears a heavy bill in supporting the energy sector and it is seeking to restructure it through multiple agreements with different economic sectors in order to put forward a plan aiming to reach a fair price for energy,” Saleh said. [DNE, 3/24/2013]

Friday sees Brotherhood offices under attack across Egypt
Protests against the Muslim Brotherhood, from which President Mohamed Morsi hails, sparked violence in a number of cities across the country on Friday. The Brotherhood’s main office in the Cairo district of Mokattam was the epicentre of events, and the area surrounding the premises saw prolonged violence between anti-Brotherhood protests and members of the Islamist group. Police repeatedly tried to disperse the crowd with tear gas. Attacks also took place in Alexandria, Mansoura, Mahalla, and Zagazig. One of the Black Bloc groups in Cairo claims responsibility for attacking the Muslim Brotherhood office in Manial district during the ‘Friday of Restoring Dignity’ demonstrations. Two hundred people were injured nationwide in the anti-Brotherhood clashes, including former presidential candidate and rights lawyers Khaled Ali. [Ahram Online, DNE, Reuters, Aswat Masriya, 2/24/2013]

Human rights groups condemn Moqattam violence
Egypt’s National Council for Human Rights (NCHR) formed a fact-finding committee to investigate the clashes that took place in Moqattam on Friday. The council called on Egyptians to denounce the events at the Muslim Brotherhood headquarters, which the council described as: “Unjustified attacks on citizens who have been targeted on the basis of physical appearance and political identity.” The Maspero Youth Union and Free Egyptians Party accused the FJP of detaining and beating members of the party. At least a dozen journalists were injured while covering the clashes. [DNE, 3/25/2013]

Libya to give Egypt US$2 bn; Egypt to extradite ex-officials
Libya is in the process of giving Egypt US$2 billion to support its economy, the new Libyan ambassador to Cairo, Mohamed Fayez Gibril, told the Turkish news agency Anadolu. The money would be a deposit to the Central Bank of Egypt. Meanwhile, Egypt’s prosecutor general decided Sunday to extradite to Libya two former regime officials wanted on charges of corruption, a judicial source told AFP. The move is part of a prisoner swap deal under which Egypt is expected to trade four members of the Muammar Gaddafi regime for Egyptians detained in Libya. The Libyan government has agreed to provide Egypt 1 million barrels of oil per month to be refined in Egypt, granting it a portion of them to provide much-needed diesel fuel. Libya is also considering granting Egypt a share of Libyan reconstruction projects. Egypt’s Arab Contractors Company is competing for Libyan projects worth LE3 billion. [Egypt Independent, Ahram Online, DNE, SIS, Asharq al-Awsat (Arabic), 3/25/2013]

US State Department, EU ‘worried’ about violence in Egypt
Spokesperson of the US Department of State Victoria Nuland expressed worry over recent violent clashes between the opposition and the Muslim Brotherhood. Nuland said that the US had encouraged the Egyptian government to lead a comprehensive dialogue to deal with “popular frustrations” in the political and the economic spheres. EU High Representative Catherine Ashton said on Saturday that she is concerned at reports of renewed violence in Cairo and at the general climate of increased domestic instability in Egypt. [DNE, Aswat Masriya, 3/23/2013]