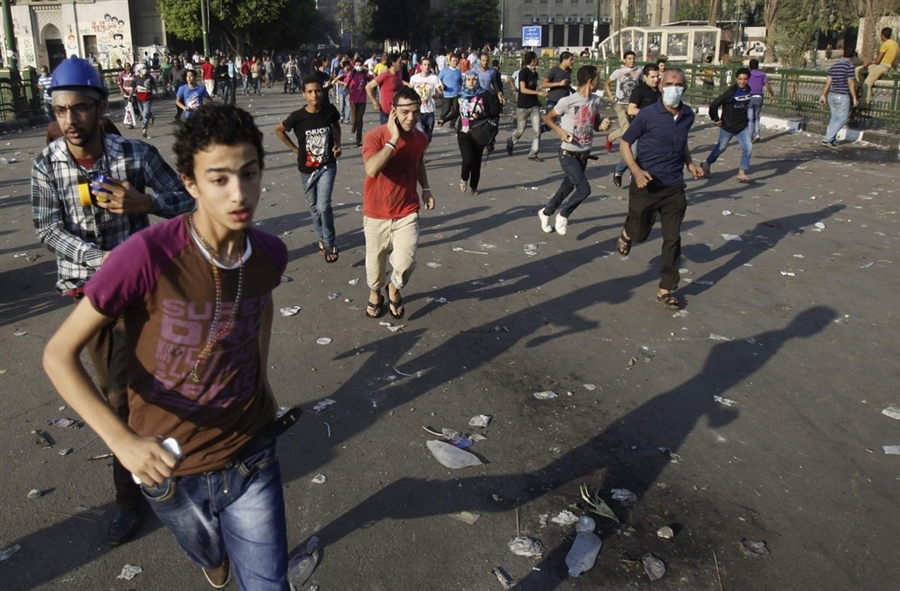 With the Egyptian public outraged about a film apparently produced in the US that allegedly insults the Prophet Mohamed, and the American public looking to Obama to condemn the breach of the US Embassy in Cairo by protesters last Tuesday, the governments of both nations have strained to cater to public opinion while still preserving diplomatic relations.

Ambassador Mahmoud Abdel Gawad warned of deteriorating US-Egyptian relations after the embassy in Cairo was attacked by the protesters. Ambassador Abdul-Jawad, who served as Director of Protocol at the Ministry of Foreign Affairs reaffirmed that the host country of the diplomatic mission is responsible for the protection of diplomats residing in its territory, whether their place of residence or work. He expressed concern about the U.S. reaction affecting the economic and trade relations with Egypt. [Shorouk (Arabic), 9/14/2012]

In a Thursday press statement on the controversy caused by the "Innocence of Islam" film, Egypt’s Popular Socialist Alliance Party registered its rejection of sectarianism and religious intolerance. The party also emphasised its support for the public’s right to stage peaceful protests. The leftist party went on to denounce those they described as "sectarianism sheikhs," or Muslim preachers who, it asserted, incited sectarianism between Egypt’s Muslim and Christian communities. [Ahram Online, 9/14/2012]

Assembly Rights and freedoms criminalize violation of national unity, Fate of Shura Council to be decided on Sunday

The Rights And Freedoms Commission of the Constituent Assembly completed its third reading of the proposed articles, before sending them to the Drafting Committee, yesterday, in preparation for the issuance of the initial draft of the new constitution. Committee members agreed to develop a text item criminalizing the “violation of the unity of the state, or the unity of its territory, or national unity, territorial integrity or abridgement of sovereignty, or threatening the democratic system, or requesting foreign assistance, or foreign interference.” A number of Committee members asked that perpetrators of these acts be tried on charges of ‘treason’ and have their citizenship revoked. [Shorouk (Arabic), 9/14/2012]

An Egyptian court has ruled that Assiut Cement’s privatization contract be cancelled and the firm returned to state ownership. The Primary Court in the Upper Egyptian city of Assiut made the decision on Thursday, reports Ahram’s Arabic-language news website. Assiut Cement has been 95.8 per cent owned by CEMEX, a global building materials firm, since its privatization in 1999. [Ahram Online, 9/14/2012]

Muslim demonstrators performed midday prayers in Tahrir, as has been typically done during the many Friday protests that have taken place in the iconic square both during and after Egypt’s January 25 Revolution early last year. Following prayers, Mazhar Shaheen, known as the "revolution’s imam," called on demonstrators to maintain the protests’ peaceful nature and steer clear of the nearby US embassy. Late Friday afternoon the Muslim Brotherhood organized a massive demonstration in front of the Mostafa Mahmoud Mosque that brought together members of the Salafi and Jama’a al-Islamiya groups, as well as three delegations from the Diocese of Giza, which includes the Virgin Mary Church in Imbaba, the Abu Seven Church in Mohandiseen and the Saint Anthony Church in Ard al-Lewa. The local media has widely blamed expatriate Copts residing in the United States for involvement in production of the film. The Ministry of Interior reports 48 officers wounded and 98 arrests. [Ahram Online, Egypt Independent, Reuters, Shorouk (Arabic), 9/14/2012]

Egypt, US struggle to maintain relations while appeasing public anger

With the Egyptian public outraged about a film apparently produced in the US that allegedly insults the Prophet Mohamed, and the American public looking to Obama to condemn the breach of the US Embassy in Cairo by protesters last Tuesday, the governments of both nations have strained to cater to public opinion while still preserving diplomatic relations. But statements made by both governments so far show that, while their first priority is to appease public outrage by taking a firm stance, they’re still not willing to go as far as to endanger relations. [Egypt Independent, 9/14/2012]

The Muslim Brotherhood did not send members to Syria to join the Free Syrian Army (FSA) and fight against President Bashar al-Assad’s regime, group spokesperson Mahmoud Ghozlan declared on Friday. Ghozlan reaffirmed the Brotherhood’s commitment to the Syrian revolution and the group’s support of the Syrian people fighting the regime, but also denied reports that the MB had supplied the FSA with weapons. [Egypt Independent, 9/14/2012]

During his visit to Belgium, yesterday, at the start of his European tour, which ends today after his visit to Italy, President Mohamed Morsi said that Egypt is currently witnessing a peaceful democratic transition. Mursi in his meeting with the President of the European Council pledged to build a civil state peaceful democracy, and noted in a press conference with European Commission President Jose Manuel Barroso that EU projects are serious. Barroso said that the EU will provide to Egypt aid worth 500 million euros, and the allocation of a similar amount, once reached Egypt to deal with the International Monetary Fund, and between 150 and 200 million euros in budget support. The Italian President at the press conference held at the Presidential Palace in Rome, emphasized the benefits of a strategic partnership in the areas of politics, culture, and the economy. [Ahram (Arabic), Shorouk (Arabic), 9/14/2012]