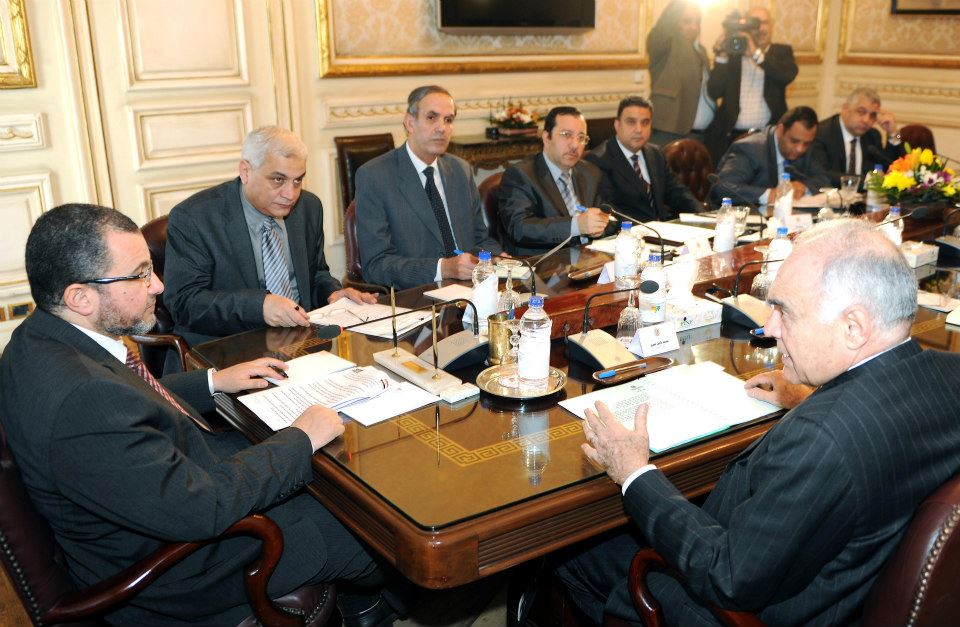 An Egyptian parliamentary panel decided on Monday to draw up a new election law, aiming to avoid delays after a court cancelled President Mohamed Morsi’s decree calling for parliamentary elections in April.

President flexible on Cabinet reshuffle, says source
A source close to the president’s office told Turkish news agency Anadolu Monday that President Morsi is willing to revise his position with regard to a Cabinet reshuffle in order to find a solution that will be satisfactory to all political forces. The source, who requested anonymity, said the president is inviting all forces to a dialogue in the next few days to discuss a new government, the elections law, the amendment of the Constitution, and the crisis over the prosecutor general. [Egypt Independent, 3/11/2013]

Egypt presidency says only police responsible for security, supports interior ministry
Egypt’s presidential spokesman, Ihab Fahmy, has said that making arrests and maintaining security are the responsibility of the state and that the interior ministry is the concerned body.
Fahmy added that the government is keen on supporting the interior ministry at this critical time, calling for trust between the people and the police. He declared that the presidency seeks to provide all the required support and assistance to the interior ministry, answering police labour strikes demonstrating against the ministry and the frequent protests-turned clashes. Minister of Interior Mohamed Ibrahim met with top Central Security Forces (CSF) officials as well as recruits. The meeting was started after a minute of mourning for “police martyrs” was held. During the meeting, Ibrahim said that developing the security institution by providing resources and mechanisms is among his top priorities. [Aswat Masriya, Ahram Online, DNE, EGYNews (Arabic), Ahram (Arabic), 3/12/2013]

Shura Council to draft new law to avoid election delay
An Egyptian parliamentary panel decided on Monday to draw up a new election law, aiming to avoid delays after a court cancelled President Mohamed Morsi’s decree calling for parliamentary elections in April. The decision to write an entirely new law appeared aimed at avoiding a protracted hold-up while the legality of the existing law is examined by the constitutional court. The new law, proposed by al-Wasat Party members, would be presented to the Supreme Constitutional Court, which would be constitutionally obliged to review them within 45 days, in contrast with amendments which have no time limit. [Egypt Independent, SIS, DNE, 3/11/2013]

Prosecution: power arrest not given to citizens
The prosecutor general’s office denied rumors that citizens have been granted arrest powers.
The office said in a statement published Monday on Facebook that the statement it had published on Sunday “did not include a decision to grant arrest powers to citizens.” The statement only highlighted the presence of article 37 of criminal procedures code, which gives citizens the right to hand over any red-handed criminals to the police.” Despite the statement, the number of citizen arrests has increased from 6 to 8. [Egypt Independent, AP, 3/12/2013]

Egypt will not sign "emergency" IMF loan: cabinet
Egypt will not sign any "emergency" loan with the IMF, cabinet spokesman Alaa al-Hadidi said on Tuesday, appearing to rule out any recourse to a bridging loan which the IMF said on Monday was available to Cairo. Hadidi added that any loan agreement would be within the framework of the country’s economic programme. The IMF said in statements on Monday that Egypt had the option of using the Rapid Financing Instrument, a lending facility designed to provide rapid and limited assistance to member countries, and an Egyptian source at the finance ministry said Cairo was studying the offer. Minister of Planning and International Cooperation, Ashraf al-Araby, will not be affected by the delay of parliamentary elections previously scheduled for April and has officially invited the IMF for another visit within the next few days to further discussion over the program. [Reuters/Ahram Online, Egypt Independent, Ahram (Arabic), Youm7 (Arabic), 3/12/2013]

Diesel supplies raised to face crisis, says supply ministry spokesperson
The Supply and Petroleum Ministries have agreed to raise the daily amount of diesel delivered to the market from 32,000 tons to 37,000 tons, as part of ongoing attempts to resolve the diesel crisis, said Supply Ministry spokesperson Nasser al-Farash on Monday. Petroleum Minister Osama Kamal met with President Morsi to tackle steps to provide power stations with gas ahead of summer. Kamal attributed the diesel crisis to a lack of control bodies and the sale of diesel on the black market. [Egypt Independent, AP, SIS, 3/11/2013]

Army will not tolerate ‘political militias’: Egyptian military source
Defense Minister Abdel Fattah al-Sisi said the Armed Forces would perform their duties to preserve the nation. He also stressed the mutual confidence between the Armed Forces and the Egyptian people. A military source who spoke to Ahram Online on Monday slammed recent statements by the office of Egypt’s prosecutor-general in which the latter gave the green light to members of the public to make citizen’s arrests of anyone found committing acts of vandalism. The source, who spoke on condition of anonymity, said the move would open the door to the formation of "private militias" and raise the specter of "civil war." [Egypt Independent, SIS, Aswat Masriya, 3/12/2013]

Judicial committee proves military violations, presidency remains tightlipped
A report issued by a judicial fact-finding committee appointed by President Mohamed Morsi last June has proved serious violations of protesters’ civil and political rights were carried out by Egypt’s military rulers during the 18-month transitional period. According to activist and committee member Taqadum al-Khatib, the report was never made public as the committee only sent one copy of the report to the president. Khatib informed Egypt Independent that the report included detailed evidence against police officers and military leaders who either ordered or committed violations against protesters. [Egypt Independent, 3/11/2013]

Police in Giza, Cairo, end strikes, others continue
Police officers in Cairo and Giza have ended their strikes, while continuing to condemn the policies of Interior Minister Mohamed Ibrahim. Assistant Interior Minister for Giza Security Abdel Mawgoud Lotfy had earlier convened with other officials from the province’s security directorate, reaching an agreement to end the police sit-ins, according to a source at the Giza Security Directorate. An interior ministry source told Ahram Arabic that the strike does not include more than one percent of the total number of police stations nationwide. Clashes between protesters and security forces around Mahalla Second Police Station continued on Sunday, although the station’s police officers are on strike. [Egypt Independent,  Ahram Online, Shorouk (Arabic), DNE, 3/11/2013]

Police attack on TV crew ‘unacceptable,’ says channel director
A police attack on a television crew from the privately-owned channel CBC on Monday is “unacceptable, said the channel’s director, who said the crew was attacked while they were covering clashes between protesters and security forces on the Nile Corniche. Mohamed Hany said that the crew, of a talk show was assaulted by police near the Qasr al-Nil bridge. [Egypt Independent, 3/11/2013]

Sokhna plant workers stage 7th sit-in, Belbeis residents continue sit-in
Hundreds of workers staged a sit-in by the Ain al-Sokhna power plant in Suez demanding fulltime contracts. “We are currently blocking the entrances; this is our seventh sit-in. We were promised full time contracts a while ago and told would be hired last Thursday but nothing happened. We tried to talk to military representatives but no one would meet with us,” Mohamed Ismail, a worker participating in the sit-in, told Daily News Egypt. Meanwhile in Sharqiya, Governor Hassan al-Naggar formed a committee on Monday to discuss problems experienced by the city. The committee will put together a detailed report providing possible solutions to a wide range of issues with which residents of the city have expressed frustration. The development comes after protests and a sit-in in Belbeis called for the dismissal of Mayor Hassan Deba, a member of the Muslim Brotherhood. [DNE, 3/12/2013]

Qandil South Sudan visit to discuss Nile water, cooperation
Prime Minister Hesham Qandil will visit South Sudan on Thursday to discuss bilateral relations and economic cooperation. Qandil will also discuss Nile water issues and joint electricity, water and transportation projects. During his visit, Qandil is expected to sign several agreements to bolster cooperation between the two countries. Essam al-Erian, the head of the parliamentary bloc for the Freedom and Justice Party, said, "I hope the president will visit Somalia and Kenya since Egypt’s influence in the African Horn has diminished." [Egypt Independent, SIS, 3/11/2013]

Egyptian protesters at Libyan embassy burn flag, smash entrance
A group of Egyptian protesters on Monday evening converged on the Libyan embassy in Cairo, where they took down and burned the embassy’s Libyan flag and defaced the building’s entrance. Dozens of protesters gathered outside the embassy Monday evening after Egypt’s Coptic Youth Front called for a sit-in at the embassy – located in Cairo’s upscale Zamalek district – to protest the killing on Sunday of 45-year-old Egyptian Coptic-Christian Ezzat Atallah. [Ahram Online, Shorouk (Arabic), 3/11/2013]