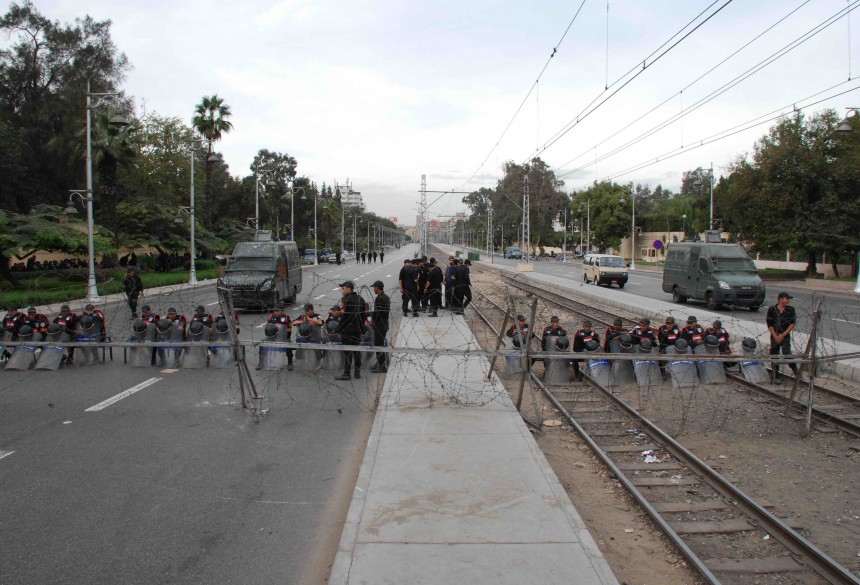 Hundreds of journalists gathered outside the Egyptian Press Syndicate in downtown Cairo on Tuesday afternoon, waiting outside the syndicate for half an hour before marching to Tahrir Square to declare their objection to the controversial constitutional declaration which was passed by President Mohamed Morsi two weeks ago.

Gheriani: I expect Morsi to cancel disputed articles in the constitutional declaration
Hossam al-Gheriani, president of the Constituent Assembly, held a Monday meeting with members of the National Council for Human Rights, which he also heads, to discuss the demands of some in the Council who expressed their rejection of the Constitutional Declaration, issued by President Mohamed Morsi. They argued the declaration was a violation of the international covenants on human rights. Sources pointed out that Al Ghariani responded, saying: “The Council issued a statement which contained criticisms of this Declaration, in particular Articles II and VI… I expect that the president will cancel those articles today or tomorrow.” [AMAY (Arabic), 12/4/12]

Presidency files report against TV presenter, satellite channel
The president’s office filed a report against talk show host Mahmoud Saad and psychiatrist Manal Omar for insulting President Mohamed Morsi. On 23 November, Omar came on Saad’s show to give a psychological analysis of Morsi following the announcement of the 22 November Constitutional Declaration. She described Morsi as a psychopath and called on him to resign. In a press conference on Monday, presidential spokesperson Yasser Ali said this was a case of defamation, and the presidency has the right to sue anyone who is violating the law.  [Egypt Independent, 12/4/2012]

Egypt’s Grand Imam launches constitution consensus-building initiative
Egypt’s Grand Imam of Al-Azhar University Ahmed El-Tayeb and a number of notable political figures have agreed to launch an initiative to handle the current crisis, concerning widespread dissent over the newly announced draft constitution and attempt to reach a consensus. On Monday, El-Tayeb met with a number of Constituent Assembly members, including the head of the Assembly, Judge Hossam El-Gheriany, former presidential candidate Mohamed Selim El-Awa, and Al-Azhar advisor to the grand sheikh, Judge Mohamed Abdel Salam. El-Tayeb announced that this was done as an effort to "bridge the divide," over the new constitutional draft. [Ahram Online, DNE, 12/3/2012]

Court lets controversial Salafi TV presenter back on the air
A controversial television program hosted by Salafi preacher Khaled Abdallah will return to the airwaves on the privately-owned Al-Nas channel, the Supreme Administrative Court ruled on Monday, overruling a previous court order banning the program due to Abdallah’s foul language. On 3 November the Administrative Court ruled that Abdallah’s program be banned for 25 consecutive days, and that the presenter himself be banned from appearing on any other TV program or participating in a phone-in interview for another 25 days. Lawyer Mohamed Salem filed the lawsuit against Abdallah on charges that the preacher insulted Omar Afifi, an ex-police officer who lives in the United States. Abdallah’s show is seen all over the Arab and Islamic world. [Egypt Independent, 12/4/2012]

Minister: New iron import fees will drive up steel prices, but protect local industry
The Industry and Trade Ministry is planning to raise fees on iron imports in order to protect local industry, said Minister Hatem Saleh on Monday. Local factories suffered last year, incurring losses as electricity and gas prices went up. The new fees of LE300 per ton would raise the price of steel imports from LE3,900 to LE4,200 per ton. “Competition protects consumers from price increases,” Saleh said, adding that he would not hesitate to use the antitrust law if consumers were adversely affected by the new fees. [Egypt Independent, 12/4/2012]

Constitution crisis threatens investment, exports and business contracts
Businessmen in various economic sectors have warned of an impending economic crisis in Egypt, stemming from a decrease in foreign investment and drop in exports. A number of contracts signed with foreign countries responsible for recent investment into Egypt have also been cancelled or postponed. This comes in the context of internal divisions within Egyptian politics resulting from the release of the final draft of the constitution. These divisions have threatened to stunt Egypt’s economic growth and development, as large numbers of the country’s opposition and its judiciary have come out against the constitution. [DNE, 12/4/2012]

Thousands Ready to March on Egypt Presidential Palace
Thousands of Egyptians massed in Cairo Tuesday for a march to the presidential palace to protest the assumption by the nation’s Islamist president of nearly unrestricted powers and a draft constitution hurriedly adopted by his allies. The march comes amid rising anger over the draft charter and decrees issued by Mohammed Morsi giving himself sweeping powers. Morsi called for a nationwide referendum on the draft constitution on Dec. 15. The country has been divided into two camps: Morsi and his fundamentalist Muslim Brotherhood, as well as ultraconservative Salafi Islamists versus youth groups, liberal parties and large sectors of the public. [AP, EGYNews (Arabic), 12/4/2012]

Egyptian journalists protest draft constitution
Hundreds of journalists gathered outside the Egyptian Press Syndicate in downtown Cairo on Tuesday afternoon, waiting outside the syndicate for half an hour before marching to Tahrir Square to declare their objection to the controversial constitutional declaration which was passed by President Mohamed Morsi two weeks ago. The march was also protesting the articles in the new draft constitution that will be put to referendum on 15 December, which they believe will negatively affect freedom of press and expression. [Ahram Online, Shorouk (Arabic), 12/4/2012]

12 newspapers and 5 TV channels strike for freedom of expression
Twelve Egyptian newspapers and five TV channels announced that they will go on strike for one day to object to both recently issued constitutional declaration and the draft constitution.
The newspapers will not print on Tuesday and the TV channels will go off-air on Wednesday.
The draft constitution, which was passed on 30 November by the Islamist-dominated Constituent Assembly and is set to be voted on in a referendum on 15 December, does not include articles against the imprisonment of journalists in cases related to freedom of expression as demanded by journalists. [Ahram Online, Aswat Masriya, EGYNews (Arabic) 12/4/2012]

State TV presenter says cutting of broadcast part of "Brotherhoodization"
After holding a burial shroud on-air on her Sunday evening show to protest the Muslim Brotherhood, state media presenter Hala Fahmy said state TV cut the transmission of her program. Fahmy pointed to the television coverage of Saturday’s demonstration in front of Cairo University as evidence, saying that both satellite and terrestrial channels spent hours covering the protests in support of President Mohamed Morsi’s recent constitutional declaration, in contrast to the amount of airtime these channels have given anti-Morsi protests in Tahrir Square over the last week. [Egypt Independent, 12/4/2012]

Security prevents protesters from approaching presidential palace
Dozens of protesters arrived on Mirghany Street, near the presidential palace, Tuesday afternoon to take part in a protest dubbed "The Final Warning." Protesters were unable to get near the palace itself due to a heavy security presence. Security troops and vehicles were deployed and streets close to the palace were blocked by razor wire. One of the officers securing the palace prevented two ambulances from driving by. The officer told Al-Masry Al-Youm that he was given orders not to allow vehicles to drive by or people to gather around the palace. [Egypt Independent, 12/4/2012]

Interior Ministry warns of ‘infiltrators’ during Tuesday demonstrations
“Infiltrators” may try to penetrate protests Tuesday, the Interior Ministry warned in a statement Monday. A security source said in the statement that the police would protect state institutions and public and private property in accordance with the provisions of the constitution and the law. The source pledged that security forces would not approach the demonstrators as long as they protest peacefully. [Egypt Independent, 12/4/2012]

Qandil speaks to the US
Prime Minister Hesham Qandil has called the draft constitution, “good enough… in no way a perfect text.” In an interview broadcast on American news network CNN he attributed the recent turmoil in Egypt to what he called a typical reaction before an important political milestone when, “people from both sides will want to have their voices heard.” While the prime minister said he was worried for people’s safety, he also stated, “this is new Egypt where the police protect the people while they are doing peaceful demonstrations.” [DNE, Aswat Masriya, 12/4/2012]