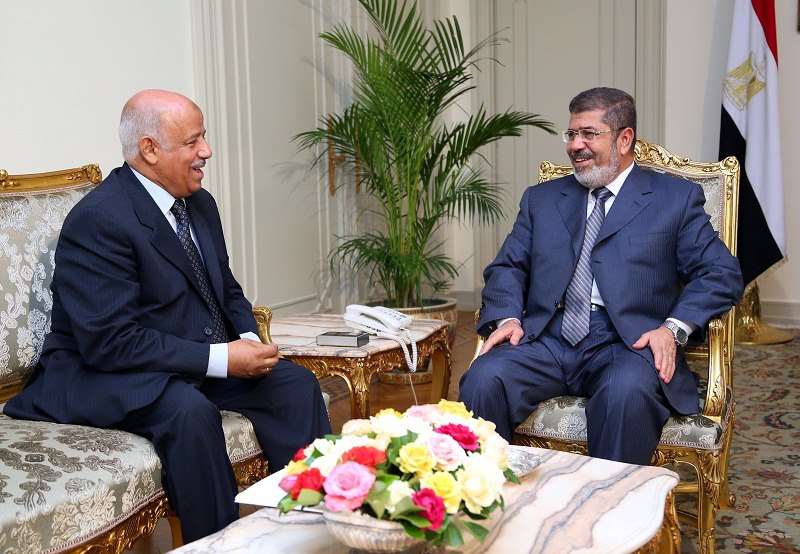 Egypt’s upper house of parliament, the Shura Council, will discuss a disputed law on the judiciary on 25 May, in a move that opponents of the law have strongly criticized and which has led representatives of the judiciary including the Supreme Judicial Council and the Judges Club  to drop out of a proposed judicial reform conference with President Morsi.

Egyptian judicial bodies withdraw from Morsi’s ‘Justice Conference’
Egypt’s upper house of parliament, the Shura Council, will discuss a disputed law on the judiciary on 25 May, in a move that opponents of the law have strongly criticized and which has led representatives of the judiciary including the Supreme Judicial Council and the Judges Club  to drop out of a proposed judicial reform conference with President Morsi.  The draft bill, which would regulate aspects of judges’ work, has been fiercely opposed by many judges. An agreement was reached between President Mohamed Morsi’s administration, which supports the bill, and judges’ representatives, to hold a conference to discuss judicial reform prior to moving forward with any changes. A preparatory session of the conference has already been held. Some Shura Council members, mainly from the Muslim Brotherhood’s Freedom and Justice Party, officially requested hastening the discussion of the draft legislation. Counselors in the Court of Cassation unanimously rejected the draft law as unconstitutional in an ongoing emergency session. Sobhi Saleh, undersecretary of the legislative committee, said the lack of the judges’ participation amount to “arm-twisting” the Shura  Council. [Ahram Online, AP, Ahram (Arabic), ONA (Arabic), Shorouk (Arabic), 5/15/2013]

President: Working on the NGO law and will submit to Shura Council soon
The presidency revealed on Wednesday that its newly formed legal team is currently working on the NGO draft law, stating that the draft encourages civil society work in Egypt, expanding its scope and facilitating administrative procedures. Meanwhile, Prime Minister Hisham Qandil underlined that the government is interested in supporting Civil Society Organizations (CSOs) in all sectors. He referred to the importance of cooperation with all civil societies to extend services for the society, especially those that the government cannot extend alone. [AMAY (Arabic), SIS, 5/15/2013]

Morsi’s popularity wanes 10 months into Egypt presidency: Poll
Egyptians continue to show discontent with President Mohamed Morsi, with 47 percent voicing dissatisfaction with his performance during his first ten months in office, according to a report by the Egyptian Centre for Public Opinion Research (Baseera). Baseera’s opinion poll, which was conducted in late in April, showed a downward trend in support for the Islamist president. As opposed to 78 percent who voiced support for the president after his first 100 days in office, only 46 percent of those polled voiced approval of his performance to date. Meanwhile, When asked about frequent arrests and detentions, presidential spokesperson, Ehab Fahmy, denied on Monday any decline in rights and freedoms. The presidency refused to comment on the Tamarod campaign, a campaign collecting signatures withdrawing people’s confidence in President Mohamed Morsi and calling for early presidential elections. [Ahram Online, DNE, 5/14/2013]

Mubarak-era housing minister, businessman acquitted in corruption case
Cairo Criminal Court has acquitted former housing minister Ahmed al-Maghrabi and businessman Mounir Ghabbour of illegally acquiring public lands. In May 2011, a court slapped the former minister with a five-year jail sentence for facilitating the acquisition of 18 feddans (roughly 18 acres) of land in the suburb of New Cairo by Ghabbour’s tourism company, Sakara for Investment, at an under-priced rate. The businessman received a suspended one-year sentence, and both men were fined LE72 million. [Ahram Online, 5/15/2013]

Egypt’s prosecution addresses human trafficking
A number of Egyptian prosecutors have recommended establishing a specialized committee to investigate crimes of human trafficking, saying there are loops in the existing legislation. In a training workshop on dealing with cases of human trafficking, the prosecutors explained that these crimes are not accurately tackled under current laws, as they are novel to Egypt and imposed by new social and economic factors. Meanwhile, at a high-level meeting at the United Nations General Assembly on Monday Egypt’s chief delegate to the UN in Geneva, Hisham Badr, delivered a statement on behalf of the government in which he “stressed the importance of international and regional cooperation in the fight against human trafficking”. [Aswat Masriya, DNE, 5/15/2013]

State security documents court case postponed to Thursday
The Giza Criminal Court has postponed the trial of former Assistant Minister of Interior Hassan Abdel Rahman, along with 40 other defendants, accused of destroying state security documents in the wake of the January 25 uprising. The defense argued that former Minister of Interior Mahmoud Wagdi should not be questioned, as he has no knowledge of the incident, adding that the destruction of the documents was necessary in order to ensure that they “do not fall into the wrong hands.”  [AMAY (Arabic), Shorouk (Arabic), 5/15/2013]

Egypt’s unemployment rate reaches 13.2% in Q1 2013
Egypt’s jobless rate climbed 0.2 percent in the first quarter of 2013 compared to the last quarter of 2012, reaching 13.2 percent of the country’s total labor force, according to state-run statistics body CAPMAS. CAPMAS’s quarterly report, released on Wednesday, attributed the increase in the unemployment rate to the stricken economy, which has seen frequent hits since the 2011 revolution. According to CAPMAS, the number of working Egyptians reached 23.6 million, with the total labor force registering 27.2 million. [Ahram Online, Aswat Masriya, 5/15/2013]

Report suggests Egyptian journalist Abu Deif was killed by professional
The weapon used in killing journalist al-Husseini Abu Deif is difficult to identify, said forensics specialist Fakhry Saleh in a press conference held on Tuesday. At the conference, held by the United Group human rights organization, Saleh said Abu Deif was either shot by “expanding (dumdum) bullets or by lead bullets”. Expanding bullets are internationally-prohibited bullets which expand once fired to produce a larger wound. Saleh’s report suggests that Abu Deif was assassinated and not randomly shot, said Abdel Hameed Salem, head of United Group’s legal committee. “He was specifically targeted while standing among a group of protesters,” Salem said. [DNE, Ahram Online, 5/14/2013]

Egyptian artists march against Brotherhood-affiliated culture minister
After gathering more than 200 signatures from members of Egypt’s cultural community opposed to last week’s appointment of new culture minister Alaa Abdel-Aziz, artists and intellectuals have taken their opposition to the next level by organizing a protest march. On Tuesday, actors, filmmakers, theatre directors, musicians and singers, along with several university professors, gathered in front of the Hanager Centre – located on the grounds of the Cairo Opera House – and began marching towards the nearby culture minister’s office in Zamalek. Participants in the protest described Abdel-Aziz’s appointment as part of a plan to “Brotherhoodize the culture ministry.” [Ahram Online, DNE, 5/14/2013]

Federation of Trade Unions announces its support for Tamarod campaign
The Federation of Trade Unions, together with Journalist Syndicate undersecretary Gamal Fahmy, have announced their support for the Tamarod (Rebellion) campaign, urging citizens to withdraw confidence from President Mohamed Morsi. The participants announced their support of the campaign due to their anger towards Morsi and the government’s inability to enact reform. [AMAY (Arabic), 5/15/2013]

Presidential spokesperson: Morsi pledges for Egypt to join BRICS
President Mohamed Morsi is still ardent about making Egypt join the ranks of the world’s growing economies known as BRICS, said Presidential Spokesperson Ehab Fahmy in a press conference on Monday. The press conference was held to announce results of Morsi’s recent trip to Brazil, a member state of BRICS. “One of the key reasons for the president’s visit to Brazil was to strengthen bilateral relations between Egypt and Brazil,” said Fahmy. “Brazilian President Dilma Rousseff welcomed the idea of Egypt joining BRICS.” [DNE, 5/14/2013]