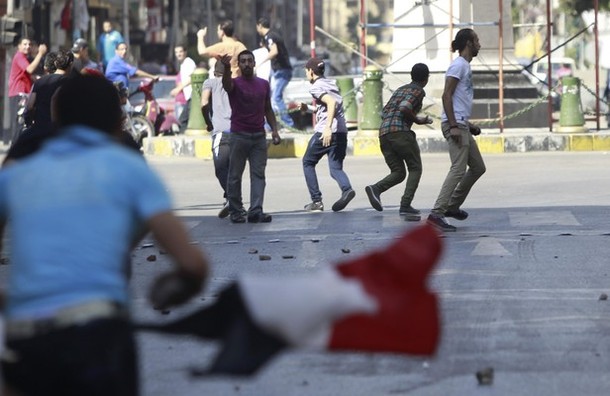 Opponents of Egyptian President Mohamed Mursi scuffled with his supporters on Friday during a demonstration that posed the first test of the Islamist leader’s popularity on the street. Egyptians had been nervous that Friday’s anti-Mursi protest, flagged for several weeks, could turn violent and security was tight around the presidential palace and some other sites.

Ministers and Governors tasked with implementation of the 100 Day program

[Ahram (Arabic), 8/24/2012] Dr. Hisham Qandil’s government began as of yesterday to take immediate action to implement President Mohamed Morsi’s 100 day plan that focused on five basic themes. Morsi had previously promised during his campaign improvement in the areas of security, traffic, and bread, and hygiene, and fuel among 63 other sub-items to be addressed. The Prime Minister instructed all the ministers and governors yesterday, to speed the implementation of those points belonging to the respective ministry.

[Ahram (Arabic), Al-Watan (Arabic), 8/24/2012] Ahram obtained the latest articles for the system of governance that addresses the balance and separation of powers after the Committee on the System of Government completed its drafting of this material. Mohammed Mohieddin, a representative of the National Security Sub-Committee, said that the Constituent Assembly is keen to strike a balance between the authorities, particularly limiting the president’s broad powers. Essam Sultan affirmed that the Constituent Assembly had decided not to allow the president’s wife to obtain another nationality and that the topic only arose during the suggestion phase. (See main article for text of the draft in Arabic.)

[Egypt Independent, Ahram (Arabic), 8/24/2012] The International Monetary Fund would not interfere with the Egyptian government’s new reform policies, said Finance Minister Momtaz al-Saeed on Thursday. The loan is a sign that the nation’s economy is moving in the right direction, and it should encourage foreign investment, he added. Lagarde is reported as saying that the loan would be granted in three installments, and the impact of each installment on Egypt’s economy would be reviewed on a case-by-case basis. Five political and revolutionary groups and a few prominent figures publicly reject an IMF loan, accusing the government of reverting to the policies of the old regime that increased income gap inequalities.

[Egypt Independent, 8/24/2012] The tourism sector has lost LE1 billion per month this year as compared to the same period in 2010, said Tourism Minister Hisham Zaazou on Thursday. He added that the ministry is studying plans tailored to each season to boost the sector, and to attract tourists from Russia and Western Europe. The Tourism Promotion Authority’s overseas offices reported that the decline in tourism is a reaction to the lack of security as seen in recent incidents including the sectarian clashes in Dahshur in July, the Nile Cities towers clashes in August and a spike in organized crime and violence in Marsa Alam.

[Ahram Online, 8/24/2012] Egypt’s central bank has told commercial banks it will offer 400 million euros in one-year euro-denominated treasury bills at an auction on 28 August, a banker said on Thursday. It will be the first time the central bank has sold euro-denominated T-bills. In November it introduced T-bills denominated in US dollars, and has sold $5.83 billion of the bills in six auctions so far. The government has turned mainly to the local money market to finance its budget deficit since Egypt’s popular uprising in early 2011 chased away most foreign investors, and the ability of local banks to lend the government Egyptian pounds has been stretched to its limit.

[Reuters, Egypt Independent, Ahram Online, Shorouk (Arabic), 8/24/2012] Opponents of Egyptian President Mohamed Mursi scuffled with his supporters on Friday during a demonstration that posed the first test of the Islamist leader’s popularity on the street. Egyptians had been nervous that Friday’s anti-Mursi protest, flagged for several weeks, could turn violent and security was tight around the presidential palace and some other sites. But scenes were calmer in other areas of Cairo where Mursi’s opponents gathered, and total numbers across the city and elsewhere were still small by early afternoon. After a spate of fistfights and stone throwing, only pro-Morsy demonstrators remain in Tahrir and the surrounding area, say sources.

[Egypt Independent, 8/24/2012] Islam Afifi, the editor-in-chief of the privately owned Al-Dostour newspaper, was released from custody on Thursday. Afifi had been held in prison while awaiting a 16 September court date. He is being tried on charges of publishing false and slanderous information about the president. Morsy passed a law on Thursday that disallows custodial detention for those being investigated in publishing-related offenses. Afifi told the state-run news agency MENA today that the law passed by Morsy was personally welcomed by him and by the journalists in general, but pointed out that the press is in need of more safeguards so that journalists can operate in a climate of true freedom.

[Egypt Independent, 8/24/2012] Security operations are continuing in North Sinai to locate and destroy militant hideouts, arrest wanted criminals and identify the sources of funding behind these jihadi groups, security sources said on Thursday. Air raids have allowed the authorities to locate 15 hideouts in different areas in Sinai, the sources continued, adding that the wanted offenders are not concentrated in Mount Halal as was previously thought. Some of the militants have sought refuge inside populated areas in Rafah and other towns, said the sources, confirming that Sinai tribes are cooperating with the Armed Forces in the search.

[Reuters, 8/24/2012] U.S. Secretary of State Hillary Clinton urged Egypt’s foreign minister to keep lines of communication open with Israel amid tensions over an Egyptian push against militants in the neighboring Sinai desert, the State Department said on Thursday. Clinton spoke with Foreign Minister Mohamed Kamel Amr on Wednesday and stressed the importance of acting transparently as Cairo deploys aircraft and tanks in Sinai, for the first time since a 1973 war with Israel, to pursue Islamist militants blamed for killing 16 border guards in an Aug. 5 attack.