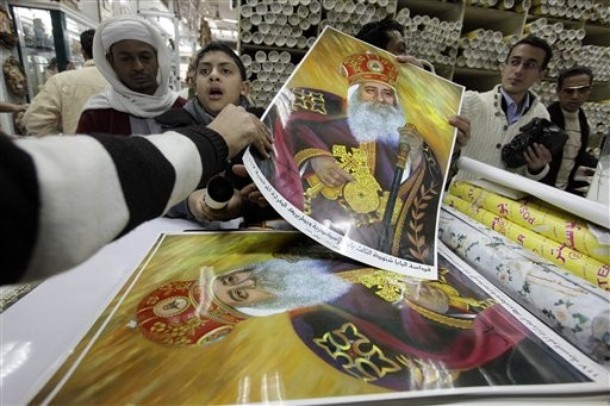 Tens of thousands of Coptic Christians gathered outside of the main cathedral in Cairo to begin a three-day mourning period for 89-year-old Pope Shenouda III, who died of natural causes on March 17.

3) The Brotherhood issued an official statement on March 18 attacking Prime Minister Kamal Ganzouri’s government and the SCAF, saying the SCAF’s determination to retain the current cabinet is an attempt to limit the powers of parliament. The FJP has since revived calls for a vote of no confidence and is expected to begin procedures for a vote on March 20. The statement claimed that the government has proven its failure in running the country, citing the Port Said massacre as evidence of the cabinet’s negligence. The statement also pointed to the NGO case and lifting of the travel ban as another example of the government’s “total failure,” and said the cabinet had “soiled national dignity, abused the independence of the judiciary, and neglected Egyptian sovereignty by allowing foreigners to interfere in domestic affairs.”  [al-Ahram, English, 3/19/2012] [al-Ahram, Arabic, 3/19/2012] [al-Masryoon, Arabic, 3/19/2012] [al-Masry al-Youm, English, 3/19/2012]

4) The legislative affairs committee has agreed to cancel Article 6 of the Judiciary Law which gives the president the right to refer civilians to military courts. [al-Masry al-Youm, Arabic, 3/19/2012]

5) In an editorial responding to reports that military aid to Egypt could resume as early as this week, the Washington Post argued, “It’s hard to imagine another move that could do more damage to U.S. interests and the cause of democracy … A waiver would … confirm the widespread suspicion in Cairo that Washington cared only about its own citizens, not the underlying democratic principles in the NGO case.  [Washington Post, English, 3/19/2012]

6) The joint parliamentary committee tasked with selecting the constituent assembly has agreed to the FJP’s proposal for the 100-member committee to include 50 members of parliament and 50 members chosen from outside. [Ikwhanweb, English, 3/19/2012]

7) Parliamentary sources said that the Muslim Brotherhood’s Freedom and Justice Party and the Salafi Nour Party agreed that the constituent assembly should include 20 FJP members and 10 Nour members. The Wafd Party will get five seats while 15 seats will be given to independent MPs and other party representatives. [al-Masry al-Youm, English,  3/19/2012]

8) Mohamed ElBaradei voiced concerns about the representativeness of the constituent assembly that while write Egypt’s next constitution. In a statement on Twitter responding to the parliament’s decision to allocate 50 percent of the committee seats to MPs, he said, “A parliament of doubtful legitimacy will form a non-neutral assembly with 50% from majority MPs who will write a constitution for Egypt, not the majority.” [Ikwhanweb, English, 3/19/2012]

9) Tens of thousands of Coptic Christians gathered outside of the main cathedral in Cairo to begin a three-day mourning period for 89-year-old Pope Shenouda III, who died of natural causes on March 17. [al-Ahram, English, 3/19/2012]

10) Egypt’s government is considering raising sales tax as well as taxes on property, alcohol and cigarettes over the next five years in order to secure $3.2 billion in IMF funding, according to an eight-page proposal currently under review by parliament.  An IMF delegation arrived on March 18 continue talks on a $3.2 billion loan continent on Egypt’s undertaking economic reforms. The proposal under review aims to cut public debt to 60-65 percent of GDP by 2016/17, mainly through raising tax revenues and one-off sales. The proposal has already been harshly criticized by the head of the parliament’s budget and planning committee, FJP member Saad al-Husseini, who said the document does not adequately address urgent economic concerns. [al-Ahram, English, 3/19/2012] [al-Ahram, English, 3/19/2012]