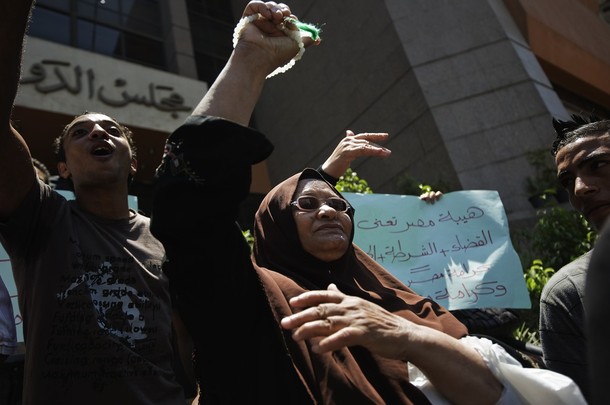 Egypt’s Supreme Administrative Court (SAC) decided Monday to postpone the court ruling over a petition filed by Muslim Brotherhood lawyers to 24 September. The petition calls for the recusal of the judges expected to rule on the validity of the second Constituent Assembly, to 24 September.

[Egypt Independent, 7/30/2012] Al-Azhar Grand Sheikh Ahmed al-Tayyeb is in contact with military leader Field Marshal Hussein Tantawi to prevent the appointment of a Salafi scholar as endowments minister, the London-based newspaper Asharq al-Awsat said. The paper quoted sources close to Tayyeb as saying that the grand sheikh’s office had been concerned over news about the nomination of Mohamed Yousry Ibrahim, adding that Al-Azhar’s grand sheikh usually selects the minister from personalities he believes are capable of helping maintain Al-Azhar’s moderate Islamic message.

[Ahram Online, Egypt Independent, 7/29/2012] At a Sunday press conference, Egyptian Interior Minister Mohamed Ibrahim announced a host of major personnel changes within the ministry, including the promotion, transfer and dismissal of large numbers of police chiefs and officers. At the conference, Assistant Interior Minister Magdi Ghoneim stated that a total of 3,800 police officers – accounting for some 10 per cent of the police officers within the ministry – would be subject to transfer. A total of 284 police officers, he added, would be promoted to the rank of general. Changes affecting high-ranking officers will come into effect by the beginning of next month, said interior ministry officials, while the rest will be implemented on 9 August.

[Egypt Independent, 7/30/2012] Constituent Assembly member Abul Ela Mady on Saturday said the armed forces will not have a political role in the new constitution. Mady explained that the budget for the army is divided into two parts. The first of which pertains to civil projects that can be discussed by Parliament and the Central Auditing Organization. The second pertains to training and armament, which is discussed in secret by the National Defense Council (NDC) that is comprised of nine civilians and nine military personnel.

[Ahram Online, 7/30/2012] Mohamed El-Beltagi, a leading Muslim Brotherhood figure and member of the Constituent Assembly tasked with drafting a new constitution, stated on Sunday that assembly members would discuss proposed constitutional articles with different political forces on Friday, following a nationwide tour aimed at hearing proposals for constitutional amendments. He also stressed that the preliminary draft of the new constitution could be amended following discussions with political forces. El-Beltagi confirmed that the assembly would finalise the preliminary draft of the new national charter within the last two weeks of August, stressing that the document would still remain open to discussion with other political factions and groups.

[Ahram Online, 7/30/2012] Egypt’s Supreme Administrative Court (SAC) decided Monday to postpone the court ruling over a petition filed by Muslim Brotherhood lawyers to 24 September. The petition calls for the recusal of the judges expected to rule on the validity of the second Constituent Assembly, to 24 September. No additional reasons for the delay were mentioned by the judges except that following Monday’s defences that they needed time to continue studying the case.

[Al Arabiya, 7/30/2012] Muslims in Egypt are now being encouraged to consider to take a vacation which follows the rules and laws of Islam. A new Cairo-based travel operator, “Shouq Travel,” is hoping to tap into the global Muslim tourism boom with a new initiative encouraging Muslims to arrange their vacations in accordance to Sharia (Islamic) law. The operator, a first of its kind in Egypt, was initiated by a team of Egyptian businessmen, who seek to provide Sharia tourism by organizing holidays for customers who must stay in special hotels and visit specific tourist sites.

[Egypt Independent, 7/30/2012] The Egyptian Business Development Association, led by Muslim Brotherhood businessman Hassan Malek, held a Ramadan iftar for its members on 28 July. In his opening speech, Malek announced the formation of the Egyptian-Asian Forum, which will hold its first economic conference in November. He spoke about the formation of an initiative for small and medium enterprises with an initial capitalization of LE100 million, wholly funded by Egyptian businessmen. He called on members of the association to support the initiative, which he said he hopes will create an equal partnership between funders and producers, with the understanding that it is a social investment.

[Egypt Independent, 7/30/2012] Egypt’s trade balance deficit jumped by 79.6 percent from LE9.7 billion in April 2011 to LE17.5 billion this April, according to a government report released Monday. The Central Agency for Public Mobility and Statistics said in a report that exports declined by 13.9 percent, bringing in LE51.1 billion from April 2011 to April 2012.  The figure is down from the LE17.6 billion brought in by exports the previous year. The agency attributed the drop to a decline in the value of some export commodities, such as certain petroleum products, crude oil, fertilizer, ready-made clothing, dairy and oranges.

Hamas and Morsy to open Rafah

[Daily News Egypt, 7/29/2012] After a weekend of meetings, reports have emerged that President Mohamed Morsy is ready to ease restrictions for entry at the Rafah crossing and that Prime Minister of the Hamas government, Ismail Haniyeh, delivered promises of disarmament within a year to Muslim Brotherhood General Guide Mohamed Badie. Some of the reports are doubtful, but Haniyeh did announce that he had come to an agreement with President Morsy to keep the Rafah border crossing that connects Gaza with Sinai open for 12 hours a day from 9 am to 9 pm, a 4-hour increase from the previous policy. The number of Palestinians permitted to cross the border will rise to 1,500 a day.

[Ahram Online, 7/30/2012] Egypt, Tunisia and Libya will consider whether to allow citizens to travel among the three countries without the need for a visa. Egypt’s President Mohamed Morsi is investigating the suggestion. This comes after Egyptian, Tunisian and Libyan foreign ministers issued what they call the "Cairo Declaration" on Sunday from Egypt’s foreign affairs ministry. The declaration is an agreement towards political and economic cooperation. Pan-Arab objectives were emphasised as well as the importance of good coordination to reach their objectives. The three ministers further welcomed any Arab country that is willing to participate in the consulting process.