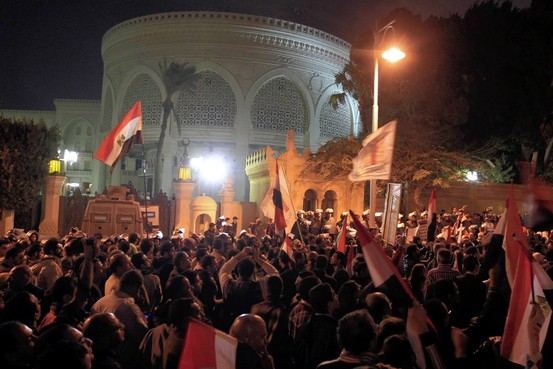 Egypt’s vice president said on Wednesday amendments to disputed articles of the draft constitution could be agreed with the opposition ahead of a Dec. 15 referendum and put in writing, and he called for dialogue with opponents to end the crisis.

Egypt’s VP offers amendments to disputed constitution
Egypt’s vice president said on Wednesday amendments to disputed articles of the draft constitution could be agreed with the opposition ahead of a Dec. 15 referendum and put in writing, and he called for dialogue with opponents to end the crisis. "There must be consensus," Mahmoud Mekky told a news conference. He expected a dialogue to begin soon, he said, adding the demands of opposition protesters must be respected. [Reuters, EGYNews (Arabic), 12/5/2012]

Egypt’s National Salvation Front issues 3 demands for President Morsi
After Tuesday’s mass protests, Egypt’s National Salvation Front has agreed on three main demands to be put before President Mohamed Morsi to be met before Friday. The National Salvation Front is a recently-formed umbrella group led by former presidential candidates Hamdeen Sabbahi and Amr Moussa, along with reform campaigner Mohamed ElBaradei. The front – which includes the Constitution Party, the Egyptian Popular Current, the Social Democratic Party and the Socialist Popular Alliance Party, amongst others – will demand that Morsi’s recent constitutional declaration be reversed; that the constitutional referendum slated for mid-December be scrapped; and that a new Constituent Assembly be drawn up to draft a constitution "more reflective" of the popular will. [Ahram Online, 12/5/2012]

Majority of judges won’t supervise referendum, Judges Club head says
Ahmed al-Zend, president of the Judges Club, said on Tuesday the vast majority of judges and prosecutors will decline to supervise the referendum on the new constitution. In a press conference held at the Judges Club, Zend stressed that judges reject the 22 November constitutional declaration, saying, “The judges are not the only ones rejecting the constitutional declaration — all Egyptians do.” Zend showed reporters the results of a survey of judges in various governorates regarding participation in the referendum. “2039 judges said ‘no’ and 226 said ‘yes,’” he said. “That’s about 90 percent.” [Egypt Independent, 12/4/2012]

Administrative prosecution judges refuse to supervise referendum
The General Assembly of judges from the Administrative Prosecution Court announced on Wednesday its complete rejection of the constitutional declaration of 22 November, confirming that its members will not be supervising the national referendum on the draft constitution until the decree is cancelled. The judges also said that they will reject any referendum that is not supervised by all of the judiciary. [Ahram Online, EGYNews (Arabic), 12/5/2012]

Egypt: Court Considers Challenges to Morsi’s Decree
Egypt’s administrative court will consider on Wednesday appeals to annul a decree issued by President Mohamed Morsi. Morsi issued a constitutional decree on November 22 shielding his decisions from court challenges – a move seen by many judges as an attempt to undermine their role and disregard the judiciary and constitution. [Aswat Masriya, 12/5/2012]

Egypt to close loan deal with African Development Bank
The African Development Bank has tentatively agreed to provide Egypt with US$2.5 billion over the next two years, which coincides with  the duration of the country’s economic reform plan, Prime Minister Hesham Qandil said Wednesday. The loan will be allocated for investment and developmental projects, such as expanding the Sharm al-Sheikh International Airport, as well as other projects for renewable energy, electricity and sanitary drainage, Qandil said during a government forum on employment. [Egypt Independent, 12/5/2012]

Clashes erupt between rival political camps at Egypt’s presidential palace
Clashes erupted at the presidential palace on Wednesday between supporters of President Mohamed Morsi and his opponents, the latter of whom have been protesting since Tuesday.
According to media statements, there is no security presence at the palace. Private-owned television channel Al-Nahar reported that Islamist protesters were attacking tents belonging to anti-Morsi protesters. [Ahram Online, EGYNews (Arabic), Shorouk (Arabic), 12/5/2012]

Protesters regroup outside presidential palace as Morsi returns
Dozens of protesters are preparing for a sit-in outside the presidential palace to protest the constitutional declaration and planned referendum on the draft constitution. An aide told Reuters that President Mohamed Morsi has returned to the palace Wednesday after leaving Tuesday night amid demonstrations that left nearly 30 civilians injured. The Interior Ministry also announced Wednesday that 40 police officers had sustained cuts, bruises and fractures on Tuesday night, including the head of Cairo’s Central Security Administration and a deputy chief police investigator. [Egypt Independent, Aswat Masriya, 12/5/2012]

Ministry of Interior: 40 Policemen Injured in Presidential Palace Scuffles
Egypt’s Ministry of Interior said on Wednesday that 40 policemen were injured in Tuesday scuffles by the presidential palace. Opposition forces staged protests on Tuesday in front of the palace against a decree issued by President Mohamed Morsi and a draft constitution written by an Islamist-dominated assembly. Clashes had erupted when a number of protesters removed the barbed wire that separated them from the walls of the palace where riot police fired teargas to disperse them before retreating. [Aswat Masriya, 12/5/2012]

Washington calls for peaceful demonstrations in Egypt
The United States called on the Egyptian opposition Tuesday to maintain peaceful demonstrations after protesters massed at the presidential palace to demand the repeal of President Mohamed Morsi’s constitutional declaration which significantly expanded his powers. “We would simply urge that protesters express their views peacefully, and that they be given the environment, if you will, to protest peacefully," US State Department spokesperson Mark Toner said, in an oblique reference to the government and security forces. [Egypt Independent, AP, AFP/Ahram Online, Reuters, EGYNews (Arabic), 12/5/2012]

President’s aides meet with US officials ahead of state visit
Essam al-Haddad, the president’s assistant for foreign affairs and member of the Muslim Brotherhood’s Guidance Bureau, met on Tuesday in Washington DC with US National Security Advisor Tom Donilon, the US Embassy in Cairo said on Wednesday. Haddad along with Khaled al-Qazaz, the president’s foreign affairs secretary, are in Washington to prepare for President Mohamed Morsi’s visit to the US, which is expected to begin on 17 December. [Egypt Independent, 12/5/2012]