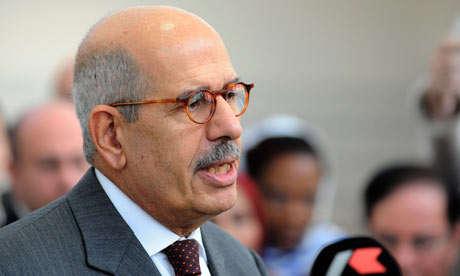 Mohamed ElBaradei dropped out of the presidential race on December 14, citing the military’s mishandling of the transitional period, which would make it impossible to conduct a free and fair election.

1) The Brotherhood’s Freedom and Justice Party has nominated Saad al-Katatny (FJP secretary general) for speaker of the People’s Assembly. The Salafi Nour Party has agreed to back al-Katatny’s nomination. The major parties agreed during a meeting on December 15 that the Nour and Wafd parties, which secured the second and third most parliamentary seats after the FJP, will select the two deputy speakers. [al-Masry al-Youm, English, 1/17/2012]

2) A group of political parties, newly elected MPs and youth activists have an initiative to create national accord on the main issues that will be discussed in Egypt’s new parliament. The initiative, called the Egyptian Declaration for National Responsibility, aims to strengthen relations between the Egyptian people and parliament to promote accountability and legitimacy of government institutions. Supporters of the initiative, including the Nour Party, Free Egyptians, Wasat, the Egyptian Bloc, Adl, the Revolutionary Youth Coalition and the Revolution Continues Coalition, hope to create an independent civil institution for public oversight of state bodies. Absent from the list of supporters are the Wafd and FJP. [al-Youm al-Saba’a, Arabic, 1/17/2012] [al-Masry al-Youm, English, 1/17/2012] [al-Shorouk, Arabic, 1/17/2012]

3) Mohamed ElBaradei dropped out of the presidential race on December 14, citing the military’s mishandling of the transitional period, which would make it impossible to conduct a free and fair election. [al-Masry al-Youm, English, 1/17/2012]

4) The nomination period for the presidential election will open on April 15, according to SCAF member Mohsen Fangary. Said al-Badawi, the head of the Wafd Party, said after a meeting of political groups last week a referendum on the new constitution would be held on May 15 and a presidential vote on June 20, in line with the SCAF’s previously announced timetable. [The Daily News Egypt, English, 1/17/2012]

5) Islamist presidential candidate Mohamed Selim al-Awa warned against what he described as “calls to disgrace the armed forces” with planned protests on the anniversary of the Jan. 25 uprising. While acknowledging that the SCAF has made some mistakes due to its “disturbing lack of political experience,” he refused to discuss the possibility of "a safe exit" for the military, saying that the option is for "those who have caused harm," which he said the military has not done. Al-Awa also stressed the importance of strong relations with Saudi Arabia and urged Field Marshal Tantawi to organize an official visit to the kingdom. [al-Masry al-Youm, English, 1/17/2012]

6) Egypt has formally asked the International Monetary Fund for at least $3.2 billion in support, according to Planning and International Cooperation Minister Faiza Aboul Naga, who said that the government will seek an agreement as soon as possible and hoped one would be finalized within a few weeks. Naga told reporters after Prime Minister Kamal Ganzouri’s meeting with an IMF delegation on 7) January 17 that the IMF has not set any conditions for the loan so far. Egypt might eventually ask the IMF for more than $3.2 billion, Naga said. [Reuters, English, 1/17/2012] [al-Masry al-Youm, English, 1/17/2012]