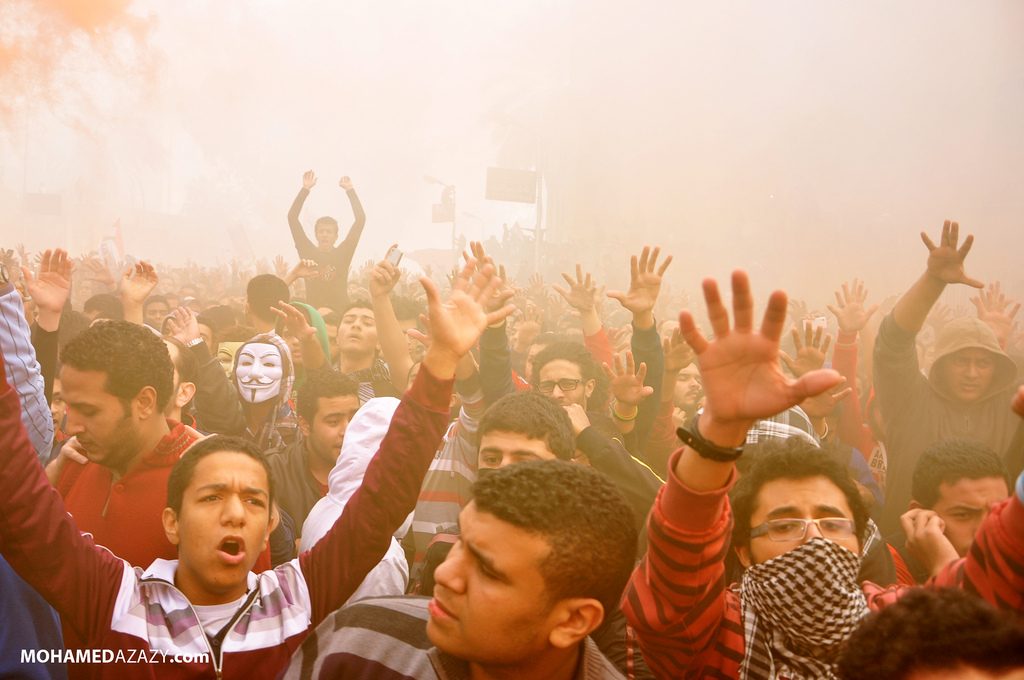 House of Representatives elections have been delayed after the Supreme Administrative Court referred the election law recently passed by the Shura Council to the Supreme Constitutional Court, questioning the constitutionality of Article 2.

NSF mulls satellite channel, political merger to strengthen position
The National Salvation Front announced Tuesday plans to launch a satellite channel to promote a national boycott of the upcoming elections and promote alternatives to Egypt’s political and social unrest. The NSF also declared its coalition parties are considering a possible merger to present a stronger opposition against the administration during a press conference in Cairo. On the sidelines of the conference, members defended their decision to boycott upcoming parliamentary elections, saying it proves the polls are not legitimate. [Egypt Independent, 3/5/2013]

Draft law to amend articles of penal code
Prime Minister Hisham Qandil’s government submitted a draft law on Tuesday to the Shura Council’s Legislative Committee to amend articles of the penal code No. 58 for the year 1937 and the criminal measures law No. 150 for the year 1950. The government pointed out that the amendments will address negative phenomena which appeared after the revolution. [SIS, 3/6/2013]

Election law referred to SCC, House of Representatives elections delayed
House of Representatives elections have been delayed after the Supreme Administrative Court referred the election law recently passed by the Shura Council to the Supreme Constitutional Court, questioning the constitutionality of Article 2. Earlier, it threw the timetable for lower house parliamentary elections due to start on April 22 into confusion when it ordered the cancellation of President Mohamed Morsi’s decree calling the four-stage polls. [Ahram Online, Reuters, Egypt Independent, EGYNews (Arabic), 3/6/2013]

Court imposes reporting restrictions in Port Said hearing
A judicial source from Ismailia’s appeals court has said that, for security reasons, attendance at Saturday’s hearing will be limited to concerned lawyers and reporters who were granted passes. The source added that only state television will be allowed to air the court’s hearing to announce a final ruling in a case dubbed as the “Port Said massacre” where football riots in February last year resulted in the death of over 70 people. [Aswat Masriya, Egypt Independent, 3/5/2013]

Egypt to start rationing petrol subsidies in May, cuts back on oil imports
Egypt will start implementing the ‘smart card’ system to sell subsidized petrol on government vehicles in May 2013 and on private cars in July, Planning Minister Ashraf al-Araby said Monday. Under the new system, vehicles with smaller engines will be assigned an annual 1,800 liters at the subsidized price. If consumption exceeds this amount, motorists will have to buy petrol at market prices. Cars with larger engine sizes will not be eligible for any subsidies. The final market prices for petrol have not been announced yet; nor has the price at which petrol will be sold to commercial vehicles. Egypt has cut back on some planned oil imports, traders said on Tuesday, as it watches its foreign reserves fall and seeks loan funding. Its state oil firm has agreed to buy only some of the gasoil it had originally sought for the second quarter and canceled a crude oil buy tender for a total of 9 million barrels for the same period. No reason was given for this, but traders said stretched finances may have been a cause of revised import volumes, although Iraq has also promised to step in with supplies. [Ahram Online, Reuters, 3/5/2013]

Egypt has sent IMF invitation to loan talks – minister
Egypt has invited the International Monetary Fund (IMF) to visit and reopen loan negotiations, a government minister said on Tuesday, a step seen as crucial to ease an economic crisis stemming from two years of political turmoil. The invitation was sent after the government submitted a revised program aimed at reducing the budget deficit to less than 11 percent of gross domestic product by the fiscal year 2013-2014, Planning and International Cooperation Minister Ashraf al-Araby told reporters during a visit to Iraq. [Reuters, 3/5/2013]

New forensic report shows al-Gendy died from torture
A forensic committee stated on Wednesday that the death of activist Mohamed al-Gendy resulted from torture and not from a car accident, as a previous forensic report had asserted. A new forensic committee was formed on the orders of the Qasr al-Nil prosecution department and consisted of a number of prominent forensic doctors. Amr Awad, director of the Qasr al-Nil branch of the prosecution, stated that the committee’s report indicated that al-Gendy’s body showed injuries consistent with beating and torture. [Ahram Online, 3/6/2013]

Police in Ismailia refuse deployment to Port Said, Mansoura officers strike
Police and low-ranking officers at a Central Security Forces (CSF) camp in Ismailia went on strike on Tuesday and refused to deploy to Port Said. The strikers have refused to obey orders from Ismailia’s deputy head of security and said their action will continue until the interior minister arrives to hear their complaints and demands. Among their demands is for police to armed, something that has also been requested by police in other governorates. A security source, who wished to remain anonymous, told Al-Ahram Arabic news website that the strike was sparked by Tuesday’s three-year jail sentence imposed on First Lieutenant Mahmoud al-Shinnawy. A similar incident occurred in Mansoura where members of Central Security Forces in Mansoura went on strike Tuesday and protested in front of the CSF headquarters in al-Mazar district. They are demanding the dismissal of current Interior Minister Mohamed Ibrahim and a new approach to confronting protesters, according to state-run Al-Ahram newspaper’s website. [Ahram Online, Egypt Independent, 3/5/2013]

Ultras Ahlawy burn police car at Giza Security Directorate, set fire to exit ex-interior minister’s apartment
Ultras Ahlawy members set a police car parked at the Giza Security Directorate on fire after deflating its tires Wednesday, while also hurling flares into the Giza Governorate headquarters and closing off surrounding streets to traffic. In a separate incident, the Ultras besieged the residence of former interior minister Mohamed Ibrahim Tuesday evening in the district of Dokki in Giza. The hardcore fan group announced earlier on Tuesday that its members were marching separately on the residences of former and current interior ministers to apply pressure ahead of a key court verdict in the Port Said football killings, expected on March 9. [Egypt Independent, DNE, Ahram Online, 3/6/2013]

Petitions calling for return to military rule hits 100, says justice spokesperson
Ahmed Roshdi Salam, a Justice Ministry spokesperson, said he had received more than 100 petitions calling for military rule as of Monday. He also denied rumors that the notary office in Port Said was closed to prevent citizens from submitting more pro-military petitions. Numerous groups and citizens in Port Said signed petitions last week demanding Defense Minister Abdel Fattah al-Sisi to take control of the government in protest over President Mohamed Morsi’s inability to end ongoing unrest throughout the country. So far, military leadership have not responded to the petitions or growing calls for their return to power. Meanwhile, supporters of Salafi Hazem Salah Abu Ismail, threatened to organize petitions calling for Abu Ismail to take over. [Egypt Independent, 3/5/2013]

Over 400 injured as Port Said situation deteriorates
One person was shot in the head and two low-ranking police officers were stabbed during ongoing clashes in Port Said near its security directorate on Tuesday afternoon, reported Ahram Arabic news website. The total number of people injured in Cairo and Port Said Tuesday and Wednesday morning has reached 471. Clashes intensified again when three Central Security Forces (CSF) vehicles arrived at the vicinity of the directorate and fired teargas at the groups gathering there. They in turn started throwing stones at the security forces. The armed forces imposed a security cordon around the security directorate on Wednesday, warning citizens of approaching the premises. The army has, however, denied imposing a curfew in the vicinity of the security directorate.  [Ahram Online, Egypt Independent, Aswat Masriya, DNE, EGYNews (Arabic), 3/6/2013]

Egypt’s capital sees 3 anti-govt protests, limited clashes
Cairo on Tuesday saw renewed clashes between anti-government protesters, including members of the Ultras Ahlawy (hardcore fans of Cairo football club Ahly), and police. Hundreds of Ultras members besieged the Cairo residences of both the current and former interior ministers in the districts of Madinet Nasr and Dokki respectively. Clashes between protesters and police renewed on Wednesday on the Nile Corniche south of Tahrir Square in Cairo Wednesday, as traffic stopped while the two sides hurled stones at each other. Central Security Forces (CSF) arrested two teenagers near the Semiramis Hotel in Cairo on Tuesday as clashes reoccurred in the area. [Ahram Online, DNE, Egypt Independent, 3/5/2013]

Al-Nour head meets with ministers of foreign affairs and education
Younes Makhyoun, head of the Salafi Al-Nour party, attended meetings with the Minister of Foreign Affairs and the Minister of Education. The party suggested a plan to help resolve immigration problems for Egyptians in Libya. Nader Bakkar, official spokesperson for Al-Nour, reported that Makhyoun met with Minister of Foreign Affairs Mohamed Kamel Amr on Monday to discuss Egypt’s foreign policy. Bakkar said that his party had requested the meeting for a number of reasons. “Firstly we are concerned about the current dilemma between Egypt and Libya regarding visa problems,” Bakkar said. He confirmed that Al-Nour was concerned with the Libyan authorities’ management of the situation. [DNE, 3/5/2013]

Egypt to aid Syrian refugees in Lebanon
Ashraf Hamdi, Egyptian ambassador to Lebanon, met with the Lebanese minister of foreign affairs Adnan Mansour on Monday to discuss several issues, including the Syrian crisis and the enormous Syrian refugee population in Lebanon. Hamdi delivered a message from the Egyptian foreign minister Mohamed Kamel Amr, pledging to support Lebanon’s stability by supporting efforts to care for Syrian refugees currently in Lebanon. Aid worth $1m will be provided, and will not be handled by the government but by Egyptian non-governmental organisations (NGOs). [DNE, 3/5/2013]