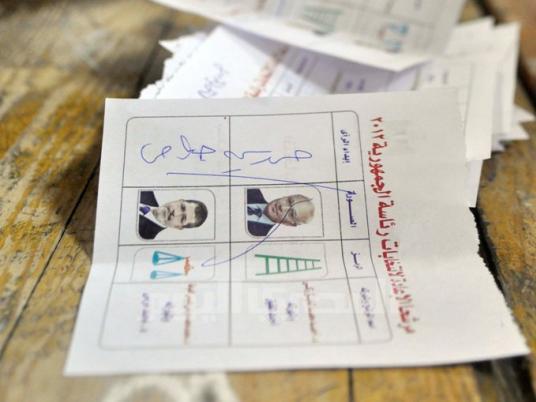 The final results of the presidential runoff will be announced on Sunday, said Presidential Elections Commission (PEC) Secretary General Hatem Bagato. “There are nationwide vote-counting errors and after the appeals are considered we will recount the votes, and then the final result will be announced on Sunday," Bagato said in a phone call to media personality Amr Adib on the Orbit satellite TV station.

[Al Masry Al Youm (Arabic), Egypt Independent, 6/21/2012] The final results of the presidential runoff will be announced on Sunday, said Presidential Elections Commission (PEC) Secretary General Hatem Bagato. “There are nationwide vote-counting errors and after the appeals are considered we will recount the votes, and then the final result will be announced on Sunday," Bagato said in a phone call to media personality Amr Adib on the Orbit satellite TV station. Bagato said the campaigns of Muslim Brotherhood candidate Mohamed Morsy and former Prime Minister Ahmed Shafiq had filed 220 and 190 appeals, respectively. The postponement raised questions by the Muslim Brotherhood and its political arm the Freedom and Justice Party, which warned against any attempts to falsify the will of the people, saying SCAF would have to face the public. Bagato also claimed that even if the Administrative Court orders it, the elections will not be repeated since the constitutional declaration prohibits challenging the final say of the PEC.

[Ahram Online, 6/21/2012] A military source who spoke to Ahram Online on condition of anonymity spelt out the ruling military council’s position on Egypt’s current uncertain political situation, in which the Muslim Brotherhood appears to stand on the verge of winning the presidency. "The military council is determined not to allow the Muslim Brotherhood to seize power," said the source. "It will not relinquish the reins of power until a new constitution is issued and the arena is set for a balanced political process… The United States and the European Union have both been sending messages reflecting their preference for [the Muslim Brotherhood’s] Mohamed Mursi as Egypt’s president," the source said. "In the belief that they enjoy this support, the group has adopted a policy of pressuring Egypt’s interim rulers regarding upcoming political arrangements." The source further explained that the Muslim Brotherhood had escalated the situation to the point where it had "unacceptably" protested the recent High Constitutional Court verdict that led to the dissolution of Egypt’s Islamist-led parliament and attempted to monopolize the Constituent Assembly responsible for drafting a new constitution.

[Ahram Online, 6/21/2012] Egypt’s Muslim Brotherhood will use peaceful methods to build a democratic political system despite "repression" by elements of the old regime, the Islamist group’s deputy leader, Khairat El Shater, told French newspaper Le Figaro Thursday. The country is facing a "new wave of repression and we are ready to fight it and face all possibilities," El-Shater said. "We are determined to use all the methods at our disposal," he added. "Especially peaceful public pressure and legal challenges, and we also depend on international support in order to fight repression [by elements of the old regime]. We reject violence and armed conflict as occurred in Yemen, Libya and Syria." In a situation of such uncertainty, nobody can predict the presidential election result, El-Shater added.

[El Watan (Arabic), Egypt Independent, 6/21/2012] A lawsuit demanding the annulment of the 16 and 17 June runoff election results will be reviewed by the Administrative Court on 26 June. Mohamed Moussa filed the suit against the Presidential Elections Commission (PEC), accusing several election monitors of favoring Mohamed Morsy and marking ballots for him, according to the state-run newspaper Al-Ahram. Egyptian news reports say that on Wednesday the administrative court dismissed a similar lawsuit filed by former presidential hopeful Abul Ezz al-Hariry that also demanded the annulment of the election results. Security authorities say they are investigating allegations that the state publishing house printed ballots marked in Morsy’s favor.

Lawsuit before the administrative court demands dissolution of the Shura Council

Alexandrian lawyer Tariq Mahmoud filed a case for the dissolution of the Shura Coucil in the wake of the Constitutional Court’s ruling that the parliamentary elections law was deemed unconstitutional. He said that the basis for the legal decision was the ability of party-affiliated candidates to contest independent seats, unfairly favoring political parties. He demanded of the court not to reverse that the military council’s ruling to dissolve the Shura Council since the same principle and constitutional violation applies to both houses of parliament.

[Bloomberg, 6/21/2012] Egypt allocated another billion Egyptian pounds ($166 million) to finance domestic wheat purchases and an additional $100 million for fuel, Finance Minister Momtaz el-Saieed said in an e-mailed statement today. The funds for fuel raised to $4.65 billion the amount given to the Egyptian General Petroleum Corp., el-Saieed said today. He didn’t say over what period the funding had been provided. The ministry had allocated about 8.5 billion pounds for local wheat purchases through June 21, he said. While the government had budgeted 40 billion pounds for fuel subsidies from December through May, the actual outlay amounted to 59 billion pounds, Prime Minister Kamal el-Ganzouri told journalists last month.

[Ahram Online, 6/21/2012] Egyptian military authorities must cede power to the winner of the country’s first post-Mubarak presidential elections, US Secretary of State Hillary Clinton insisted Wednesday. "We think that it is imperative that the military fulfill its promise to the Egyptian people to turn power over to the legitimate winner," Clinton said in a discussion hosted at the State Department. "The military has to assume an appropriate role which is not to interfere with, dominate or try to subvert the constitutional authority," she warned. The Egyptian military-led authorities had been saying "one thing publicly and then backtracking to a certain extent, but our message has been consistent … they have to follow through on the democratic process," Clinton told the invited audience. "By that we mean, yes, elections that are free, fair and legitimate whose winner gets to assume a position of authority in the country, but who also recognizes that democracy is not about one election, one time." For entire transcript, click here.