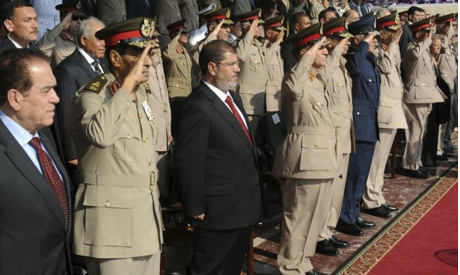 The Freedom and Justice Party, the Muslim Brotherhood’s political wing and President Mohamed Morsi’s party, has denied it sent the president a memo with recommendations regarding his next cabinet. Independent daily Al-Shorouk reported the FJP memo recommended that caretaker Prime Minister Kamal Al-Ganzouri and Planning and International Cooperation Minister Faiza Aboul Naga not be reinstated, whereas Interior Minister Mohamed Ibrahim should keep his post.

[Daily News Egypt, 7/3/2012] The Freedom and Justice Party, the Muslim Brotherhood’s political wing and President Mohamed Morsi’s party, has denied it sent the president a memo with recommendations regarding his next cabinet. Independent daily Al-Shorouk reported the FJP memo recommended that caretaker Prime Minister Kamal Al-Ganzouri and Planning and International Cooperation Minister Faiza Aboul Naga not be reinstated, whereas Interior Minister Mohamed Ibrahim should keep his post. The National Front to Continue the Revolution recommended that Morsi appoint Abdel Moniem Aboul Fotouh for vice president and Mohamed ElBaradei for prime minister but denied having a list of names for cabinet positions.

[Egypt Independent, 7/2/2012] The Constituent Assembly committees chose rapporteurs and deputy rapporteurs on Monday. Muslim Brotherhood leader Sobhi Saleh, a member of the System of Government Committee, said the committee split into five subcommittees including the executive authority, judicial, local administration, defense and national security and legislative, which he presides over. “The Constituent Assembly will focus on the 1971 Constitution because it outlines governmental authorities and responsibilities, but will not include the negative points,” Saleh said. “We will attempt to give Parliament the right to hold a no-confidence vote against the government without the president’s agreement,” he added.

With Brotherhood dominant, liberals look to SCAF for support

[Egypt Independent, 7/2/2012] The political landscape over the past few weeks has largely been described as divided among an Islamist bloc, a military bloc and a third one that remains rather undefined. Since Morsy’s victory and inauguration, liberal forces are reassessing their position in the new order and deciding how they will proceed under a Muslim Brotherhood presidency. The Free Egyptians Party, one of the largest liberal groups, plans to hold a series of “national reconciliation” discussions with political, cultural and economic figures in order to overcome the rivalries hatched during the election season. Morsy is expected to nominate at least some liberal figures to his cabinet. Many liberals nonetheless fear the Brotherhood represents a threat to civil liberties, could drag the country into a religious war, and poses a risk to economic and civil rights. Former MP Amr Hamzawy called on liberal and secular parties on Monday not to join the formation of the new government, or the presidential staff.

[Ahram Online, 7/2/2012] Egypt’s new state budget may give President Mohamed Morsi little scope for accomplishing the expansive social and fiscal reforms he promised during his election campaign, local economists say. The country’s 2012/13 budget, which took effect on 1 July, sees state spending rise to LE533.7 billion ($88.3bn), with the bulk of the sum already earmarked for specific functions. Egypt’s Supreme Council of the Armed Forces (SCAF) approved the document on Sunday night, following the council’s assumption of certain legislative powers after the mid-June dissolution of parliament. Around 80 per cent of spending is already set aside for public worker salaries, paying off Egypt’s abundant debts and subsidies for food and energy.

Lawsuit filed against SCAF to hand full powers to Morsy

[Al Watan (Arabic), Egypt Independent, 7/2/2012] Lawyer Mohamed Abdel Al filed a lawsuit on Monday at the State Council’s Administrative Court requesting that the Supreme Council of the Armed Forces hand over full power to President Mohamed Morsy. He said that the supplement to the Constitutional Declaration robbed the powers of the elected institutions, and that the March 2011 declaration had stated that the transitional period would end in six months, but it was unlawfully extended until the end of June 2012. The lawsuit requested the immediate handing over of power to the elected civilian legislative and executive authorities. In a related story, Mohamed al-Omda, Deputy of the Legislative Committee in the defunct Parliament, submitted a complaint to the Attorney General against Field Marshal Hussein Tantawi and members of the military council for their violation of scope of executive power (article 138, military law 25/1966), threatening the unity of Egypt (article 77, penal code), and illegally altering basic constitutional and social institutions (article 174, penal code).

[Al Masry Al Youm (Arabic), Egypt Independent, 7/2/2012] Protesters continued to flock to the Presidential Palace in Heliopolis on Monday to voice their demands to President Mohamed Morsy. All palace gates aside from the main gate have been blocked off as a result of the protests. Security personnel allowed a number of citizens inside the palace. Sources told Al-Masry Al-Youm that a delegation of Ceramica Cleopatra workers entered the palace and presented their demands to the president’s administrative staff.

Morsy to meet with Hillary Clinton on 14 July

[Egypt Independent, 7/2/2012] US Secretary of State Hillary Clinton plans to visit Cairo on 14 July, said acting Egyptian presidential spokesperson Yasser Ali on Monday. President Mohamed Morsy is scheduled to receive Clinton on her first visit to Egypt since the start of his presidency. Clinton aims to discuss the relations between the two countries as well as broader developments in the region. On a related note, US Senator John McCain plans to visit Egypt on Wednesday, state-run news source MENA reported today. McCain is expected to hold talks with several senior officials and political figures to discuss recent developments in Egypt following the election of President Mohamed Morsy.