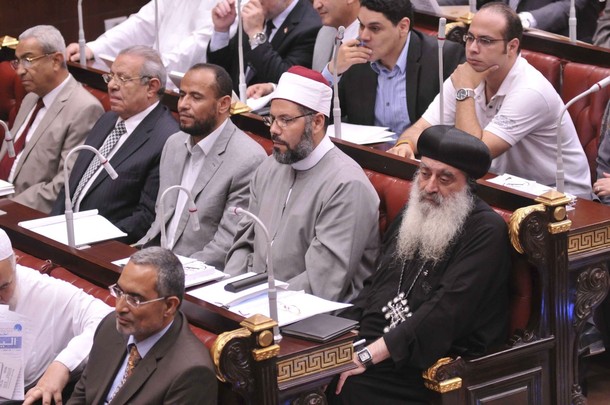 Egypt’s Constituent Assembly is in the final weeks of drafting the country’s new constitution, with as much as 70 per cent of the document already drafted, according to assembly member and newly-appointed Minister of State for Parliamentary Affairs Mohamed Mahsoub.

[Ahram Online, 8/20/2012] Egypt’s Constituent Assembly is in the final weeks of drafting the country’s new constitution, with as much as 70 per cent of the document already drafted, according to assembly member and newly-appointed Minister of State for Parliamentary Affairs Mohamed Mahsoub. "As for the remaining 30 per cent of the new constitution," Mahsoub told Ahram Online, "this is expected to be written in the weeks immediately following Eid Al-Fitr holiday, so that the entire draft of the new constitution could be ready for public discussion by the middle of next September."

[Shorouk (Arabic), 8/21/2012] Counselor Hosni Salamouni, head of the Administrative Court, reiterated his demand for the exclusion of judges overseeing the upcoming parliamentary elections. He explained, saying: "Election fraud before the revolution was systematic, the product of political will, and the government chose from within its orientation which led to thieves’ and drug dealers’ infiltration of Parliament. Salamouni said that the supervision by the judges of the elections did not prevent the forgery of in the past, and forced judges to bear false witnesses in most cases. He stressed the negative impact on the judiciary’s reputation.

[allAfrica.com, Shorouk (Arabic), 8/21/2012] In yet another government reshuffle, 90 percent of the current governors will be changed, to include less ex-military and judicial members, except for governorates that are on Egypt’s borders. President Mohamed Mursi and Prime Minister Hisham Kandil are currently working in coordination with different state institutions to appoint the new governors where they will announce the reshuffle after Eid (Islamic feast), a local newspaper reported. In related news, the Shura Council will soon issue new assignments to the National Council for Human Rights, as part of the overall change in the state apparatus after the election of President Mohammad Morsi.

[Shorouk (Arabic), 8/21/2012] Defense Minister Abdel Fattah al-Sisi, decided to appoint Major General Hamdi Badeen, the previous commander of the military police, as military attaché to Egypt in China. He is to begin his assignment after the Eid al-Fitr holiday.

[Ahram Online, 8/20/2012] Since Egypt’s January 2011 uprising, the country has suffered from heavy falls in foreign direct investment (FDI), international foreign reserves (IFR) and tourism revenues. Numerous rich countries have vowed to help Egypt via grants, loans, deposits and investments, but they can be divided into two categories – oral and actual – because not all of the countries have fulfilled their promises yet. This article reviews the pledges and amounts provided to support Egypt’s ailing economy.

[Ahram Online, Al-Masry Al-Youm (Arabic), 8/21/2012] A protest calling for Egypt to reject loans from the International Monetary Fund (IMF) and World Bank will take place outside the Cabinet building in Cairo on Wednesday during a visit by IMF chief Christine Lagarde. ‘We are all Mina Daniel’, a revolutionary group named after a leftist Coptic activist killed during clashes with the military last year, and the Egyptian Communist Party are two of the main groups organising the event. President Morsi’s Freedom and Justice Party stressed that the international loan will not follow the initial Ganzouri plan.

Egypt to send aircraft and tanks into Sinai, but military denies

[Egypt Independent, Al-Masry Al-Youm (Arabic), 8/20/2012] Egypt is preparing to use aircraft and tanks in Sinai for the first time since the 1973 war with Israel in its offensive against militants in the border area, security sources said on Monday. The plans to step up the operation were being finalised by Egypt’s newly appointed Defence Minister General Abdel Fattah al-Sisi as he made his first visit to Sinai on Monday following the killing of 16 border guards on 5 August. A military source, however, denied allegations of the use of extra armor and aircraft to fight extremists in Sinai

[Egypt Independent, 8/21/2012] The defense minister, General Abdel Fattah al-Sisi, asked tribal leaders who gathered on Monday in Arish in the north of the peninsula to "support the security forces and the campaign" in the area, government daily Al-Ahram said. Sisi gave them an assurance that the objective of the campaign was to "take full control of the situation in Sinai" and said that the army’s role was to "support interior ministry forces."

[Egypt Independent, 8/21/2012] Vice police have detected numerous instances of sexual harassment on the first two days of the Islamic Eid al-Fitr holiday at several public areas in Cairo, the state-run news agency MENA reported. At the Giza Zoo, young people who formed groups to protect females from harassment were assaulted by the harassers, which caused violence to break out between both sides. Police arrested several and referred them to prosecution. Several organized popular initiatives to counter harassment on the holiday and to promote awareness of the dangers of sexual harassment.

[Egypt Independent, 8/21/2012] The Facebook page of the group calling for "a second revolution on 24 August to dissolve the Muslim Brotherhood and its party" warned of violence against demonstrators by Muslim Brotherhood members on Monday, asking President Morsy to take a clear stance on the right for citizens to demonstrate non-violently. The statement comes after a controversial fatwa issued by radical Qatar-based cleric Wagdy Ghoneim and statements from the Azhar cleric Sheikh Hashem Islam , both condoning the killing of anti-Brotherhood protesters.

[Egypt Independent, Al-Masry Al-Youm (Arabic), 8/21/2012] The Obama administration said Monday that Iran doesn’t deserve to host a summit of non-aligned nations later this month but urged foreign leaders who decide to attend to press the Iranian government comply with international demands to come clean about its nuclear program. Several foreign leaders, including Egyptian President Mohammad Morsi and Palestinian President Mahmoud Abbas have already said they will attend the summit, which is being held in Tehran from Aug. 26 to 31. Ali Akbar Salihi, Foreign Minister for Iran, called Egypt "a cornerstone of the region" and that the revolution "opened a new chapter in the course of its foreign policy and international relations."