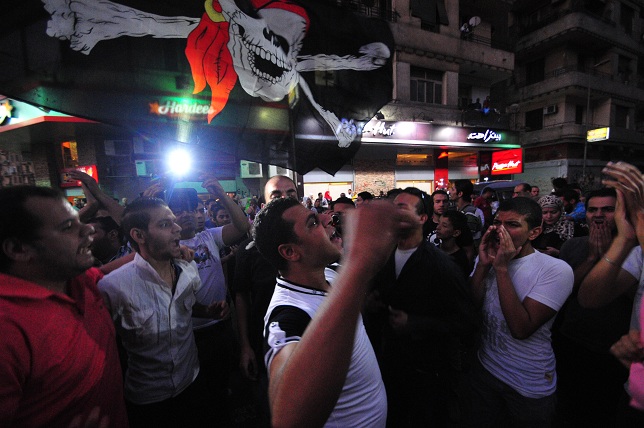 Controversy erupted Sunday during the Constituent Assembly’s discussion of an article on the freedom of faith and worship, which was handled in a session attended by a number of intellectuals and artists.

[Egypt Independent, 9/9/2012] Jama’a al-Islamiya said it might break off its alliance with the Muslim Brotherhood’s Freedom and Justice Party after President Mohamed Morsy ignored them in his recent appointments to the presidential team and in the gubernatorial shuffle.Safwat Abdel Ghany, head of the political office for Jama’a al-Islamiya’s Construction and Development Party, told London-based Asharq al-Awsat on Sunday that his party “will have to run alone in the upcoming election” one day after Essam Derbala, the head of the group’s Shura Council, intensified his criticism of the Brotherhood.

Over half of Egyptians want female vice president, says poll

[Egypt Independent, 9/9/2012] More than half of the Egyptian population would like to see a woman appointed vice president, according to a public opinion poll conducted by the Egyptian Center for Public Opinion Research, which is affiliated with Al-Masry Al-Youm. The poll showed that 55.2 percent of the population supports seeing a woman as vice president. Of those polled, 55.7 percent of men and 54.6 percent of women were in support.

[Egypt Independent, 9/9/2012] Controversy erupted Sunday during the Constituent Assembly’s discussion of an article on the freedom of faith and worship, which was handled in a session attended by a number of intellectuals and artists. Article 8 of the Rights, Freedoms and Duties section of the constitution draft put together by the assembly stipulates that the “freedom of belief and worship is preserved, and the state protects the freedom of establishing places of worship, in the way defined by the law and in line with public order.”

[Egypt Independent, BBC Arabic/Shorouk (Arabic), 9/9/2012] The Port Said Criminal Court on Sunday acquitted former Port Said security chief Salah Eddin Ahmed and three officers of killing three protesters and attempting to kill another 24 during the 25 January revolution. The prosecution had called for imposing the harshest penalty on the suspects in the previous session. Officers Hazem Abdel Fattah, Moataz Bellah al-Gohary, Mostafa al-Habashy and Ahmed Abdel Fattah were accused of shooting at protesters from the roof of the police station on 28 January 2011.

[Ahram Online, 9/9/2012] Egypt’s prime minister expects to conclude a $4.8 billion IMF loan deal within two months and is in talks for additional budget support worth about $1 billion from the World Bank and the African Development Bank (AfDB), he said on Sunday. Asked when he thought an IMF loan would be agreed, Qandil said: "A couple of months." He also said Egypt was in talks with the World Bank and AfDB. "I think we’ll get half a billion from the WB and a similar one from the AfDB," he said. "It comes after the IMF." Saudi Arabia and Qatar have pledged to support Egypt. Kuwait made a "reconnaissance visit" and a delegation of Kuwaiti officials and business executives would return to Egypt on Thursday, he said. Meanwhile, Egyptian campaigners launched a fresh salvo against government plans to borrow from the International Monetary Fund (IMF) on Saturday, claiming further foreign loans would mean repeating the "economic disasters" of the Mubarak era.

[Egypt Independent/Reuters, 9/9/2012] Egypt’s new prime minister said on Sunday he was finalizing an economic reform plan that would rein in hefty subsidies and said the economy is expected to grow in the current financial year by three to four percent or more if investment goals are achieved. Hesham Qandil told Reuters in a rare interview that the government aims to cut the budget deficit, now running at about 8 percent of gross domestic product, by one percentage point in two years although he said that target was "dynamic." There would be cuts to subsidies on 95-octane gasoline in coming months and a review of other fuel handouts, he said, while tax revenues would be boosted by casting a wider net.

[allAfrica.com, 9/8/2012] The Armed Forces held a press conference on Saturday 08/09/2012 to spell out details about Operation Eagle carried out in North Sinai. The Armed Forces decided to hold the press conference to prevent the circulation of contradictory reports about the Armed Forces and Operation Eagle, which aims to restore law and order in Sinai, said Armed Forces spokesman Colonel Ahmed Mohamed Ali. The official results of Operation Eagle are as follow: 31 tunnels on the borders with Gaza were destroyed. Tunnel openings are usually built inside houses, so they remain difficult to detect, he said. There are a total of 225 tunnels on the borders, with some having two or three exit openings, which means there are between 550 and 700 tunnel openings out there, he said. 33 persons were killed and injured during confrontations with the Armed Forces and civil police.

[Egypt Independent, al-Balad (Arabic), Daily News Egypt, Ahram Online 9/8/2012] The Ultras Ahlawy, an association of hardcore supporters of Egypt’s leading football club, Ahly, have accused the Interior Ministry of plotting a clash between Bedouin tribes in Alexandria’s Borg al-Arab area and its members who were planning to storm the stadium hosting a Super Cup match between their Premier League champion team and the Egypt Cup winner, ENPPI. Sports Minister Al-Emary Farouq had announced that the game would be played at Borg al-Arab Stadium on Sunday despite the tensions surrounding the event. Ahly fans had threatened to storm the pitch during the game to protest the resumption of football activity before prosecuting the perpetrators of the violence that followed a Premier League match between Ahly and Masry in Port Said Stadium in February and left 74 dead.

[Ahram Online, 9/7/2012] A number of political groups have condemned the growing influence of ultra-conservative Salafists at the Ministry of Awqaf (religious endowments) and Al-Azhar, the most important seat of learning in the Sunni Muslim world. In a statement issued on Friday, the Popular Movement for the Independence of Al-Azhar, the Free Front for Peaceful Change and the Union of Revolutionary Forces described the appointment of Salafists, mostly from the Building and Development Party – the political arm of Al-Jamaa Al-Islamiya – as deputies at the ministry as an attempt to “divert the path of the Egyptian people who look to Al-Azhar as their religious reference point.”

[Egypt Independent, 9/7/2012] Twitter posts concerning the Muslim Brotherhood won’t harm the United Arab Emirates’ relations with Egypt, Dubai’s police chief said, saying the Brotherhood is a limited group that represents only 10 percent of Egyptians. Dahi Khalfan has made fiery statements against the Brotherhood, warning of what he described as the group’s grand plot to overthrow the Gulf’s monarchical regimes. In an interview with Al Arabiya satellite channel Sunday, the police chief said he had no agenda for his actions and that his tweets are those of a Gulf citizen who does not accept his rulers or security being harmed.