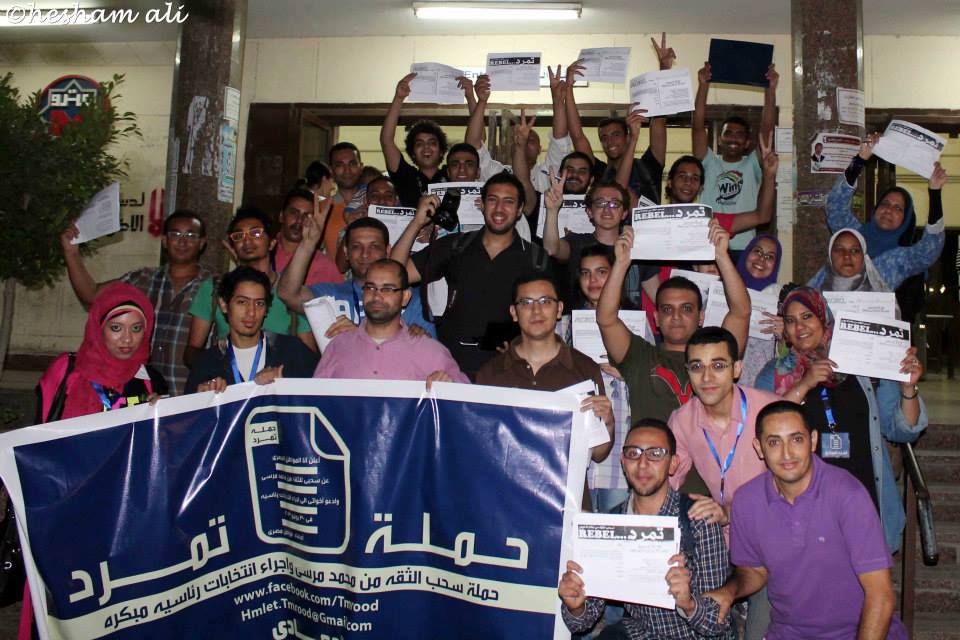 Opposition and revolutionary groups are organizing only two marches this Friday, as some figures saying they are reserving their organizational strength for a million-man protest planned for the anniversary of President Mohamed Morsi’s inauguration on 30 June. The main focus of the marches, however, is raising awareness for the Tamarod campaign.

Judges club to inform International Judges Union about Egypt judicial crisis
The Egyptian Judges Club will hold a conference with the International Judges Union on Monday to discuss Egypt’s ongoing judicial crisis and alleged violations of Egypt’s judiciary, a judicial source has told Ahram Online. Heads of judicial authorities and clubs, judges, lawyers and legal experts, along with a number of media and public figures, are expected to attend the conference. Meanwhile, the Ministry of Justice and the Ministry of Parliamentary and Legal Affairs stated that the Judicial Authority Law (JAL) will address judges’ expectations. A coalition of independent judges accused the presidency, the Shura Council and the Brotherhood of waging a war against the judiciary, in an attempt to undermine them. [Ahram Online, AMAY (Arabic), Watan (Arabic), 5/17/2013]

Egypt PM says only Tahrir Square is unstable
Egyptian Prime Minister Hisham Qandil said on Thursday that “one kilometer only is responsible for the instability in Egypt,” referring to Tahrir Square where a popular uprising that toppled Hosni Mubarak in 2011 was centralized.  He insisted that other cities including the touristic Sharm al-Sheikh and Hurghada resort areas are stable, reported the state news agency. In a meeting in Hurghada with governorate officials, Qandil stressed, "The return of tourism is important for the Egyptian economy and Egypt’s international reputation." [Aswat Masriya, ONA (Arabic)

Source: Shura will receive the elections law, SCC opposes gerrymandering
An official source said the Supreme Constitutional Court will hand over to the Shura Council the election law by next week, after its consideration of the extent of its constitutionality and the expiration of the 45-day deadline to review the law. The source expected that the law will face criticism and amendments, requiring another review by the Constitutional Court. Dr. Ramadan Battikh, a member of the Legislative Committee of the Shura Council, said he expected the court to pay particular attention to the redistricting of constituencies, saying: “Whatever we try, we will not be able to fix the districting problem, because we calculate it logically and not mathematically as the court would.” [Watan (Arabic), 5/17/2013]

Also of Interest:
NSF to hold a roundtable on the NGO Law | ONA (Arabic)
Moussa: Opposition is leaning towards participating in elections | Shorouk (Arabic)
Salafi Call Vice-President advises followers not to participate in calls to remove Morsi ONA (Arabic)

Opposition leader’s daughter arrested again on charges of fraud
A Cairo prosecutor ordered on Thursday evening the arrest of former presidential candidate Hamdeen Sabbahi’s daughter for the second time over new charges of internet marketing fraud. Salma Sabbahi is facing the same charges as before but there are around 40 complaints now against her, prosecutor Ayman al-Babeli told Aswat Masriya. Salma was arrested on Wednesday pending investigations, after citizens filed complaints against her accusing her of conning them in a pyramid scheme. [Aswat Masriya, 5/16/2013]

New Egypt Central Bank Ruling A Blow For Local Money Market Funds
Egypt’s central bank, worried that banks are investing too much of their cash in local money market and fixed income funds, is imposing stricter limits on such investments, a move asset managers say could cripple their industry. In a copy of a central bank directive obtained by Reuters, the central bank says banks will not be able to invest more than 2 percent of their tier-one capital in local money market and fixed-income funds, down from 5 percent at present. A central bank official said that some banks’ investments in these funds had approached the size of their entire loan portfolio. [Amwal al-Ghad, 5/17/2013]

Egypt police shut Rafah crossing to protest abductions
Egyptian policemen blocked the crossing into the Gaza Strip on Friday to protest against the kidnapping of Egyptian security forces in the Sinai, witnesses and sources said. Soldiers along with employees at the Rafah border stressed that they will keep the border closed until their kidnapped colleagues are freed. As a result, there has been a gathering of hundreds of Palestinians waiting to travel across the closed border. A security source revealed that the kidnappers demanded the release of Islamist militants detained for almost two years. Many residents of Egypt’s Sinai Peninsula blamed the kidnapping on heavy-handed security policies adopted by the interior ministry. President Mohamed Morsi met on Thursday with Defense Minister Abdel Fattah al-Sisi and Interior Minister Mohamed Ibrahim to discuss ways to release security officers who were kidnapped in Sinai earlier today.  [DNE, Reuters, Ahram Online, AP,  Aswat Masriya, EGYNews (Arabic), Shorouk (Arabic), 5/17/2013]

Sisi meets US Central Command Chief
Commander-in-Chief of the Armed Forces and Defense Minister General Abdel-Fattah al-Sisi met in Cairo Thursday new head of US Central Command General Lloyd J. Austin along with his accompanying delegation. During the meeting, Sisi and Austin discussed a range of issues, including means of boosting military cooperation between the two countries. The meeting was also attended by US ambassador Anne Patterson. [SIS, Shorouk (Arabic), 5/17/2013]

Friday marches call for early presidential elections
Opposition and revolutionary groups are organizing only two marches this Friday, as some figures saying they are reserving their organizational strength for a million-man protest planned for the anniversary of President Mohamed Morsi’s inauguration on 30 June. The main focus of the marches, however, is raising awareness for the Tamarod campaign, a petition-based venture aiming to withdraw confidence and popular legitimacy from President Mohamed Morsi. Campaigners collected signatures of no-confidence in President Mohamed Morsi from citizens passing by. Egypt’s Constitution and al-Wafd parties, along with other political groups, joined the campaign. Security has been tightened around the usual protest hotspots, including the interior ministry, the Cabinet headquarters, the Shura Council, the presidential palace and the Brotherhood headquarters. Similar protests took place in Alexandria calling for removing the Muslim Brotherhood from power. [DNE, Ahram Online, ONA (Arabic), EGYNews (Arabic), AMAY (Arabic), Shorouk (Arabic), 5/17/2013]

Egyptians gloomier as country struggles after revolt – poll
Egyptians are getting gloomier about their country’s future more than two years after an uprising toppled Hosni Mubarak, but most retain a favorable view of the ruling Muslim Brotherhood, according to a poll released on Thursday. The poll by the Washington-based Pew Research Center showed 30 percent of Egyptians think their country is headed in the right direction, down from 53 percent last year and 65 percent in 2011. Just 39 percent believe things are better off now than they were under Mubarak. The poll showed that the number of Egyptians with a positive view of the Muslim Brotherhood had slid to 63 percent from 75 percent in 2011. Fifty-three percent express a favorable view of Morsi, while 43 percent him negatively. About half expressed a positive view of the Brotherhood’s Freedom and Justice Party, while the National Salvation Front received more negative reviews. [Reuters, 5/16/2013]

FM expresses to UN Egypt’s worries over violating rights of Muslim Myanmar
Egypt’s Permanent Representative to the United Nations Ambassador Mootaz Ahmadein Khalil delivered a message from Foreign Minister Mohamed Kamel Amr to Deputy Secretary-General of the UN Jan Eliasson in which he expressed Egypt’s concerns regarding violations towards the Rohingya Muslim community in Myanmar. He said the continuation of these violations puts the international community before a moral commitment towards defending the rights of Myanmar Muslims and improving their standards of living to secure their political and social rights as citizens. [SIS, 5/17/2013]

Western attack on the draft NGO law
A number of Egyptian diplomatic sources in Western capitals said that they heard from the respective governments clear expressions of concern regarding the draft law being debated that would regulate the work of NGOs in Egypt. According to one of these sources, the “questions raised about the issue turned from whether the government intends to support this project to  outright expressions that such a law – if passed – will result in clear public criticism.” Western diplomatic sources said that the clear messages have been communicated at the highest levels on the negative consequences of passing the draft NGO law. According to some of these sources, Cairo officials promised that the matter is still capable of being modified. Others received assurances that sectors of civil society would be consulted on the matter. [Shorouk (Arabic), 5/17/2013]