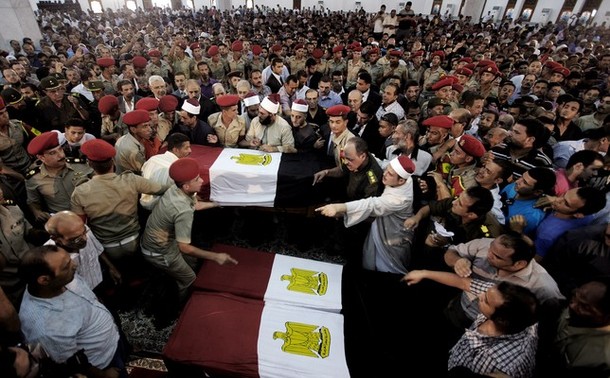 Gaza Prime Minister Ismail Haniyeh on Monday called for the establishment of a permanent security coordination committee with the government of Egypt after yesterday’s attack on the Egypt-Israel border in Sinai.

[Ahram Online, Reuters, 8/6/2012] The Muslim Brotherhood blamed Sunday’s deadly attack near Egypt’s border with the Gaza Strip, in which 16 Egyptian border guards were killed, on Israeli intelligence agency Mossad. The Brotherhood stressed that attempts to thwart Egypt’s revolution and subsequent democratic transition had "escalated after the people successfully elected a new president and a new government was successfully drawn up." Hamas interior ministry spokesman Ehab Al-Ghsain also blamed Israel for the attack "whether directly or through collaborators infiltrating those … groups".

[Egypt Independent, Al Sharq Al Awsat (Arabic), 8/7/2012] Abdallah Gohama, the chief of the Tarabeen tribe and the top tribal chief in Central Sinai, said that Sinai Bedouin chiefs warned military leadership about militancy in Sinai. Gohama said President Mohamed Morsy’s decision to open road crossings in Sinai to Palestinians and to relax security measures at the border has  contributed to the spread of those groups on the peninsula and has facilitated their travel between Gaza and Sinai.

[Ahram Online, Al Masry Al Youm (Arabic) 8/7/2012] Egypt’s President Mohamed Morsi didn’t attend the military funeral after being advised not to for security reasons. The funeral of 16 borders guards killed during Sunday’s deadly attack in North Sinai began in Nasr City officially at the Memorial of the Unknown Soldiers with thousands of mourners in attendance. Despite the security guards, angry protesters chased Prime Minister Hisham Qandil down upon arrival at the funeral prayers, held up their shoes, and chanted against the Muslim Brotherhood and President Morsi.

[Daily News Egypt, 8/7/2012] The Minister of Transportation, Dr Mohamed Rashad, held a meeting with directors and officials of transportation authorities, companies and the ministry, to study plans for the coming period. The directors shared their vision for the future, stressing the necessity of providing and developing infrastructure. They also discussed the importance of reshaping transportation so that it suits citizens’ needs.

[Ahram Online, Egypt Independent, 8/7/2012] Protesters gathered by the Israeli ambassador’s house in the posh Maadi district on Monday night calling on the Egyptian government to cut off relations with Tel Aviv. While the assailants behind the attack that took the lives of sixteen Egyptian soldiers and injured another seven remain unknown, some Egyptians have pointed the fingers at the Israeli state.

[Ahram Online, 8/7/2012] Egypt’s foreign currency reserves have resumed their steep decline, falling to $14.42 billion in July from $15.53 billion in June, according to figures from the central bank on Tuesday. The figure has plunged since political turmoil scared away tourists and spooked foreign investors, both major sources of foreign currency.

[Daily News Egypt, 8/7/2012] Despite the looming uncertainty shrouding Egypt’s relations with Iran, the magnitude of Egyptian-Iranian trade exchange has quadrupled during the past four months, according to Hamid Safdl, Iranian Assistant Minister of Industry, Trade and Mining. Egyptian former Chargé d’affaires in Iran, Ambassador Dr Mahmoud Farag, said that economic and trade relations continued under Mubarak, however relations were kept to a very narrow limit.

[Egypt Independent, 8/7/2012] Gaza Prime Minister Ismail Haniyeh on Monday called for the establishment of a permanent security coordination committee with the government of Egypt after yesterday’s attack on the Egypt-Israel border in Sinai. Haniyeh denied any Palestinian involvement in the attack, saying, “Palestinians would never kill their Egyptian brothers.” He accused Israel of aims to impose tension on the border with Egypt and abort the joint efforts to end the siege on Gaza.