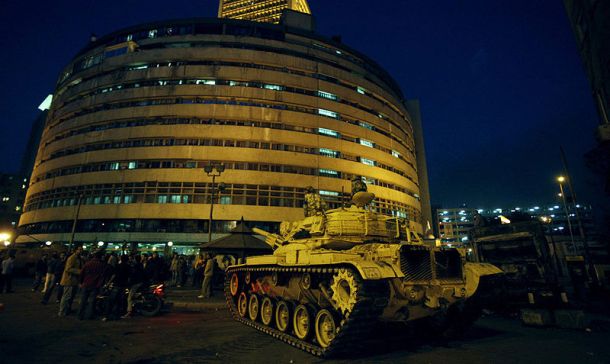 The content of state media will change in the coming months, Information Minister Salah Abdel Maqsoud told reporters Thursday evening. Leading media should be characterized by professionalism and provide different opinions, Abdel Maqsoud said, adding that those who do not adhere to professionalism, objectivity, neutrality and ethics would simply be dismissed.

[Egypt Independent, Al Ahram (Arabic), 8/16/2012] President Mohamed Morsy told the Supreme Judicial Council today that he would limit exercising his newly gained legislative powers after cancelling the army’s constitutional declaration, and that he would yield those powers to the new parliament immediately once it is elected. Morsy as saying that he would not single-handedly form a new Constituent Assembly if the existing one is dissolved, nor would he change any article that the people have voted on in the last referendum.

[Ahram Online, 8/17/2012]In a political landscape seemingly dominated by Islamists and the military, Egypt’s secularists and liberals have launched what they hope will be new alternative. The Third Current was launched in June by a number of prominent political figures and liberal parties with the aim of defending personal and political rights, and upholding the civil-democratic nature of the state. Parliamentary elections are slated for one month after a constitution is approved by a national referendum.

[Daily News Egypt, 8/16/2012] Human rights and Nubian rights activist Manal El-Teiby announced her resignation Thursday from the Constituent Assembly tasked with writing Egypt’s next constitution, citing the actions of the Islamist majority against her. In a statement announcing her decision, she said she tried to ensure the new constitution would guarantee rights and freedoms for all citizens regardless of the ruling party’s intellectual and ideological beliefs. “Except that did not sit well with the majority that has a clear ideological basis and dominates the Constituent Assembly,” El-Teiby said.

Parties distance themselves from 24 August protests

[Egypt Independent, 8/16/2012] The Wafd Party will not take part in the 24 August demonstrations against the Muslim Brotherhood, said party head Al-Sayed al-Badawy on Thursday during a conference honoring former party leaders in Gharbiya. Jama’a al-Islamiya also denounced the protest in a statement today, saying that those who resort to violence or vandalism during the demonstrations must be held accountable.

[Egypt Independent, 8/17/2012] The content of state media will change in the coming months, Information Minister Salah Abdel Maqsoud told reporters Thursday evening. Leading media should be characterized by professionalism and provide different opinions, Abdel Maqsoud said, adding that those who do not adhere to professionalism, objectivity, neutrality and ethics would simply be dismissed. The minister said he seeks to develop a code of ethics that would be drafted by senior journalists from the Egyptian Radio and Television Union and other prominent members of the media to develop a code that ensures impartiality, objectivity and professionalism.

[Shorouk (Arabic), 8/17/2012] Ismail al-Washahi, a lawyer for Freedom and Justice party, submit a complaint to the General Directorate of Investigation in Cairo against 3 editors: chief editor of al-Fagr, Adel Hammuda; chief editor of Sawt al-Umma, Abdel Halim Qandil, and chief editor of al-Dostour, Islam Afifi, on behalf of the his clients Ahmed Lakluk and Adham Hassanein. He accused the editors of defaming the president, spreading false news, and sowing sedition and panic. Mamdouh Wali, head of the Journalists Syndicate, rejected prosecuting journalists for criticizing the policies of officials and public figures. Gamal Eid, director of the Arabic Network for Human Rights Information, also denounced the FJP’s attempts to suppress free press in Egypt.

[Egypt Independent, Reuters, Al Masry Al Youm (Arabic), 8/16/2012] Security officials have found leaflets that were disseminated in Sheikh Zuwayed in Northern Sinai urging citizens to fight against the Armed Forces, the police, the judiciary, political parties and tribal leaders. An Islamist militant group operating in Egypt’s Sinai Peninsula that borders Israel has warned the Egyptian army that a military crackdown in the area would force it to fight back. Israeli MK Arieh Eldad and Defense Minister Ehud Barak also accused Egypt of violating the peace agreement by deploying forces not approved by Israel in accordance with the treaty. They demanded the immediate withdrawal of those extra forces.

[Egypt Independent, 8/17/2012] The Cabinet has allocated an LE1 billion budget to the Sinai Development Authority (SDA), said authority head General Shawky Rashwan on Thursday. The US has granted the authority US$50 million to help start development work in the area, and the Ministry of Planning and International Cooperation has earmarked LE24 million to fund the SDA’s urgent needs, Raswhan continued. Rashwan added that he has met with Defense Minister Abdel Fattah al-Sisi to discuss how to purge Sinai of terrorist strongholds and kick start development projects in the region.

[Egypt Independent, Al Masry Al Youm (Arabic), 8/16/2012] Senior members of the Muslim Brotherhood have accused Mohamed Dahlan, the former leader of the Palestinian Fatah party, of orchestrating the 5 August attacks near the Rafah border that left 16 Egyptian soldiers dead. Brotherhood leader Ali Abdel Fatah told Al-Masry Al-Youm that Dahlan has a dark history of violence, and that he had attempted to stage a coup against former Palestinian President Yasser Arafat and current President Mahmoud Abbas. In related news, Moussa Abu Marzouk, a representative of the political bureau for Hamas, said that the Egyptian army has always stood next to Palestine and never put pressure on Gaza. He denied rumors of the transfer of the Hamas office to Cairo.