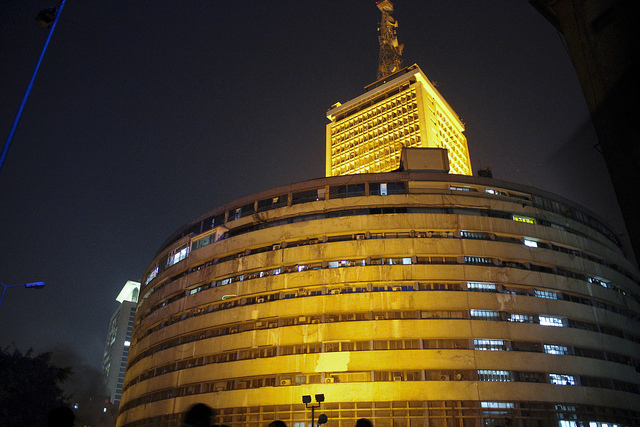 State body the General Authority for Investment (GAFI) has warned television channel CBC it will revoke its licence if prominent satirist Bassem Youssef’s weekly show ‘al-Bernameg’ does not comply with the standards of the media free zone, where the channel is based.

Egypt’s Shura Council votes on political rights law
The Shura Council passed into law 30 articles from the political participation bill in its Monday session. It continued discussion and voting on the law on Tuesday. Shura Council members voted down legislation requiring political parties to display female candidates at the top of party lists.  They agreed to grant the Supreme Electoral Committee more power in running the voting abroad process and removed the requirement of “full judicial supervision” from the expatriate voting process. [Aswat Masriya, DNE, Egypt Independent, Ahram Online, 4/3/2013]

Egypt opposition demands ban of religious slogans in electoral campaigns
Opposition parties’ representatives in Egypt’s Shura Council (upper house of the parliament) threatened to withdraw from the council’s evening session on Tuesday, if parliament members pass a draft bill regulating political rights that allows use of religious slogans in electoral campaigns. The Council’s legislative committee had approved removing a clause that bans the use of religious slogans from the government-drafted bill, limiting the ban to discrimination based on religion, gender, or ethnic origins. [Aswat Masriya, Egypt Independent, Shorouk (Arabic), 4/3/2013]

Egypt’s Constitution Party conflicts roll on as youth take over main HQ
The internal conflicts facing the liberal Constitution Party escalated on Monday evening when, according to news reports, a group of young members stormed the party’s main headquarters in downtown Cairo and occupied it. The group also announced that they will start a sit-in at the headquarters until the leadership of the party are dismissed and the group’s demands are met. The main demands of the dissenting youth members is that a steering committee be created, made up of 9 members from among the 10,000 members who are designated as co-founders of the party, in an election that is supervised by the judiciary and the NGOs.  The rest of the demands are related to the hierarchy of the party and the role of the steering committee. [Ahram Online, 4/2/2013]

SLA councillors urge leadership not to appeal prosecutor general verdict
State Litigation Authority members urged the body’s leaders not to appeal the verdict overturning Prosecutor General Tala’at Abdallah’s appointment. The State Litigation Authority (SLA) councillors’ club said it was urging the authority’s supreme council not to appeal in order to “favour the country’s interests” and end the debate over the position of prosecutor general. In a statement released on Monday night, club chairman Mohamed Taha said that this request comes out of a desire to “restore stability to Egypt which will only be brought about through restoring stability to the judiciary”. [DNE, 4/2/2013]

Prosecutors turn up heat on Youssef, other media figures
Egypt’s prosecutor is investigating complaints of "threatening public security" against popular satirist Bassem Youssef, who is out on bail facing accusations of insulting President Mohamed Morsi and Islam. The Public Prosecution decided to release Ali Qandil, a stand-up comedian, on LE5,000 bail after hearing his testimony. Qandil was accused of defaming the Islamic Religion on a show presented by satirist Bassem Youssef. He now joins the ranks of several colleagues in the media who face charges of insulting the president, amid a continuing series of judicial actions many activists believe to be a part of a regime crackdown on critics and political opponents. Rights lawyers say there have been four times as many lawsuits for insulting the president under Morsi than during the entire 30 years that Mubarak ruled. Underscoring such claims, Abdallah also summoned a journalist and an activist for journalists’ rights for interrogations Tuesday. Abdallah ordered on Tuesday ONtv host and journalist Gaber al-Karmouty interrogated over a complaint accusing him of  disturbing public peace, disseminating false news and insulting the judiciary. [Egypt Independent, Ahram Online, 4/3/2013]

IMF delegation arrives in Egypt to resume loan talks
An International Monetary Fund (IMF) delegation arrived in Egypt on Wednesday to resume negotiations over a loan sought by the government to settle its financial crisis. Egypt predicts a speedy conclusion to talks with the IMF on the $4.8 billion loan that will help save its economy from crisis. It may not be that easy. Cairo must convince the IMF that it is serious about reforms aimed at boosting growth and curbing an unaffordable budget deficit. That implies tax hikes and politically risky cuts in the generous system of state subsidies for fuel and bread. Egypt aims to boost its foreign currency reserves to $16 billion by the end of June, the planning minister said on Tuesday, offering a lower target than the government had previously announced. The Socialist Popular Alliance Party will participate in Wednesday’s protests against the loan Egypt is seeking from the International Monetary Fund (IMF). Several popular powers had called for protests to express their rejection for the $4.8 billion loan Egypt is striving for. [Aswat Masriya, Reuters, Egypt Independent, Ahram Online, 4/2/2013]

Authorities arrest 15 suspected militants in North Sinai
The Armed Forces arrested 15 people on Tuesday accused of being members of a militant group that illegally brandished assault weapons and marched parade-style through the North Sinai cities of Rafah and Sheikh Zuwayed two days ago. In a statement published on the Interior Ministry’s official Facebook page, officials say more than 50 members of a Salafi jihadist group from Egypt and Gaza participated in the marches. According to reports, the group paraded through the streets driving SUVs and carrying automatic weapons. [Egypt Independent, 4/2/2013]

Government threatens to shut down satellite channel CBC
State body the General Authority for Investment (GAFI) has warned television channel CBC it will revoke its licence if prominent satirist Bassem Youssef’s weekly show ‘al-Bernameg’ does not comply with the standards of the media free zone, where the channel is based. All television channels that work inside the media free zone, located in the satellite city of 6 October on the outskirts of Cairo, must abide by an ethical code and a number of regulations. The government body said that if CBC continued to follow the current policies on screening satirist Bassem Youssef’s program, its licence could be revoked. The warning came after the Investment Authority received multiple complaints over comedian Bassem Youssef’s show. They did not specify how many complaints were received, but did say no public figures had submitted a grievance. [DNE, Ahram Online, Egypt Independent, Reuters, Watan (Arabic), 2/4/2013]

April 6 Youth calls for ‘Day of Anger’ Saturday
The April 6 Youth Movement called for a ‘Day of Anger’ Saturday to mark the anniversary of its establishment. In a Tuesday statement on its Facebook page, the movement said people should demand the overthrow of the administration once again. The group claims the government is to blame for killing protesters and arresting revolutionary youth and activists, contending that things will only get worse as the administration seeks to muzzle the media. [Egypt Independent, 2/4/2013]

US has ‘real concerns’ about Egypt: Kerry
The United States has "real concerns" about the direction being taken by the Egyptian government following recent arrests and political violence, Secretary of State John Kerry said Tuesday. "We have put a series of real choices to the government of Egypt, but in the end they have to make those choices," Kerry told reporters. Kerry, who visited Egypt in March, unlocking some $250 million in US aid to help revive the economy, admitted President Barack Obama and the administration "share real concerns about the direction that Egypt appears to be moving in." "It is our hope that there is still time to be able to turn a corner," he said. "But the recent arrests, the violence in the streets, the lack of inclusivity with respect to the opposition in public ways that make a difference to the people of Egypt, are all of concern today." [AFP/Ahram Online, 4/2/2013]

Egypt presidency slams US embassy’s statement on TV satirist; FJP condemns US statement on arrest
A Twitter post by the US embassy in Cairo criticising the recent questioning of television satirist Bassem Youssef by the Public Prosecution drew a sharp response from Egypt’s presidency on Tuesday. Responding via Twitter, the presidency accused the US embassy of engaging in "political propaganda" after the embassy posted a video of US television satirist Jon Stewart poking fun at Egyptian President Mohamed Morsi. The Justice and Freedom Party, political wing of the Muslim Brotherhood, also condemned the comments from State Department spokeswoman Victoria Nuland and said the government was committed to freedom of expression. "Nuland’s statements are … blatantly interfering in Egypt’s internal affairs," a party statement said. [Ahram Online, Egypt Independent, Reuters, NY Times, 4/2/2013]

Salafis to lobby against rapprochement with Iran
The Salafi Dawah and the Nour Party are launching campaigns against Egypt’s warming ties with Iran, leading Salafi sources have told Al-Masry Al-Youm. The groups will stage a series of Friday protests outside the residence of Iranian Ambassador Mojtabi Amani, which will be followed by demonstrations outside the Muslim Brotherhood’s headquarters. Sources also added that a panel, led by Salafi Dawah deputy chairman Ahmed Farid and comprising lawyers, preachers, Nour Party MPs and business and media figures, will press the Egyptian government to revoke bilateral agreements between the two countries and reject Iranian tourists. [Egypt Independent, DNE, 4/2/2013]