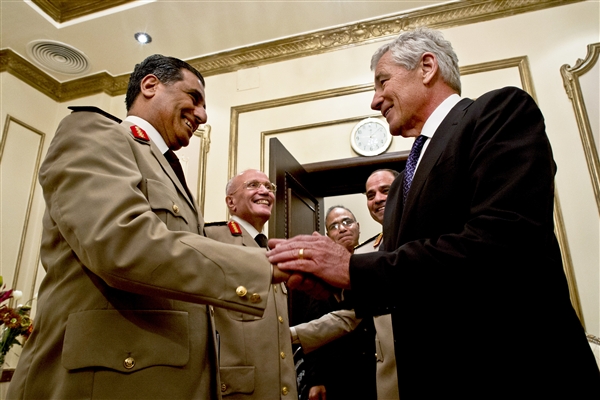 Nour Party refuses to participate in limited cabinet reshuffle
The Salafi Nour Party announced its refusal to participate in the limited cabinet reshuffle scheduled to take place in the coming days. In its statement, the party said that the reshuffle cannot be seen as a solution to the crisis. The Nour Party is in favor of a complete overhaul, stressing in its statement that the Party is not reluctant to participate, but rather sees the reshuffle as futile. Meanwhile, the Islamist Building and Development Party has called for the removal for the Ministers of Justice and Information in the reshuffle, but has also announced its support for the Minister of Interior to continue in his post. [Shorouk (Arabic), 4/25/2013]

Finance, Justice, Investment, Oil among ministers who might be replaced – Sources
Egypt’s imminent cabinet reshuffle will be "limited" with "some" ministerial changes and will be announced on Saturday April 27th, reliable sources from the government confirmed. It might include a new appointment as deputy prime minister but Prime Minister Hesham Qandil will remain in place, the presidency announced Wednesday. Some reports claimed that the finance minister will depart the Egyptian government due to Orascom Construction Industries’ long-standing tax disputes. The government sources said the new cabinet reshuffle will include a number of ministries, notably the Ministry of Justice. The sources further noted that the cabinet reshuffle is likely to affect 4 portfolios of Qandil’s government. The reshuffle would very likely affect one of the economic portfolios; the current Investment Minister Osama Saleh. However, there were reports saying the reshuffle would presumably topple Oil Minister Osama Saleh as the country’s diesel crisis still bites. [Amwal al-Ghad, DNE, 4/25/2013]

Shura Council agrees to more amendments of the protest law
Amid fierce debates, the Shura Council’s Legislative, Security, Constitutional and Defense Committees, agreed on removing the term ‘public order’ from the draft protest law. The term appeared in Article 4 of the draft law which prohibited any disturbance “of security or public order, prohibiting the hindrance to citizens’ interests, or the blocking of roads and other means of transport, obstructing traffic, or attacking personal property, or hindering the freedom to work.” [Shorouk (Arabic), 4/25/2013]

Shura committee approves three judiciary bills, judges reject changes
The Shura Council’s Committee on Constitutional and Legislative Affairs approved in its Wednesday session three proposals for amendments to the judiciary law, amid fierce debate. The committee will now refer the three proposed bills to the upper house of parliament to discuss in plenary before voting on and referring the bills back to the committee to debate and amend. Egypt’s judges will treat the amendments proposed by the Wasat Party to the Shura Council regarding the judiciary law as if they did not exist and will demand that the upper house of parliament cease discussing such amendments. Several political parties and forces protested in front of the High Court Wednesday, in solidarity with judges during their public assembly meeting. Morsi, in an official statement, renewed his support for an independent judiciary, saying that the bill should be submitted to judicial review before its adoption by the Shura Council. He announced the intention to meet with Egypt’s judges next week to resolve the crisis. Meanwhile, head of Egypt’s Judges Club, Ahmed al-Zend has called for a presidential apology for "insults" directed at Egypt’s judiciary by Islamist figures. Al-Zend is facing a lawsuit, filed by the Building and Development Party, the political wing of al-Jama’a al-Islamiya for encouraging the United States to interfere in Egypt’s affairs. The al-Islah Wal Nahda Party said the Judiciary Law has created a crisis between the judiciary and the presidency, while the Ghad al-Thawra Party called for discussions on the bill to be postponed. [DNE, Egypt Independent, Reuters, SIS, Ahram Online, Shorouk (Arabic), Watan (Arabic), 4/25/2013]

US citizen among dozens released on bail
A judge confirmed the decision to release 30 defendants arrested on Friday after police intervened in clashes that erupted outside the High Court building in Downtown Cairo. Human rights lawyer Ragia Omran said the 30 will have to pay bail of EGP 200 each. The defendants include Andrew Blake, a United States citizen. The Abdeen Court had ordered the release on bail of the 30 defendants on Tuesday, but the prosecution appealed the release decision. The defendants are required to pay a bail of EGP 200 each in order to be released but are set to be released today. [DNE, 4/24/2013]

Egypt to issue schedule next month for gradual fuel subsidy cuts
Egypt aims next month to issue a schedule of gradual rises in the subsidised prices various industries pay for fuel, to bring them near to world levels in four years, its trade and industry minister said. A reduction in energy subsidies is widely seen as an important step towards allowing Egypt to secure a US$4.8 billion loan from the International Monetary Fund (IMF) to shore up its finances. Trade and Industry Minister Hatem Saleh said the government has been negotiating with industry leaders on the plan to increase prices. [Reuters/Egypt Independent, 4/24/2013]

Borsa struggles under heavy hand of government
Over two years after Egypt’s revolution ousted president Hosni Mubarak, the stock market continues to sag, plagued by sluggish trading turnover, a lack of new equity issuance and the reluctance of many big foreign investors to commit money. The effect is being felt well beyond the community of finance professionals in Cairo and Alexandria — the market is viewed as a barometer for business confidence, and its weakness is preventing companies from using it to raise money. Investors feel the government is unsympathetic to them, and inclined to intervene in the market to obtain money or settle political scores. [Reuters/Egypt Independent, 4/24/2013]

Egypt to reach agreement with IMF soon – presidency; US supports IMF loan for Egypt
Egypt’s presidential spokesman said on Wednesday that negotiations with the International Monetary Fund (IMF) over a $4.8 million loan have almost reached a conclusion. Spokesman Ihab Fahmy added that in light of a national program for economic reform, the final agreement will take into consideration the living conditions of economically-disadvantaged groups. Meanwhile, US Treasury Secretary Jacob Lew on Wednesday expressed US support for an international loan for Egypt to help stabilize the country’s economy, and said the International Monetary Fund was still engaged in discussions about a $4.8 billion loan. "What the IMF is seeking in Egypt is the kind of commitments that would be reliable," Lew said during a hearing at the U.S. House of Representatives appropriations subcommittee. [Aswat Masriya, Reuters, 4/25/2013]

Study: Majority of Egyptians harbor negative feelings towards police
A legal study issued by the United Group, consisting of lawyers and legal consultants, entitled "The image of police in the eyes of the Egyptians after the revolution," said that 92.1% of Egyptians are familiar with the locations of police departments and stations, 90.4% are familiar with traffic police, and 52.7% of the population hold negative impressions of the police. The study prepared by Dr. Shaden Ibrahim Nasir, a member of the faculty at the Police Academy, also claims only 12.6% expressed that a positive impression of the police, and 29.1% believe that the military police is under the purview of the Ministry of the Interior, based on its actions to secure assets and deal with protesters during the revolution. [Watan (Arabic), 4/25/2013]

Human rights group: Deaths and injuries in Port Said intentional
A fact-finding report on the deadly violence that took place in Port Said between 26-28 January says that the security bodies used excessive and random force against protesters. The Mousawa Centre for Human Rights said in its report that the evidence and testimonies gathered prove official claims that police responded with force to an attempt to break into police institutions are false. The report is based on testimonies, pictures and videos. The information gathered indicates that armed policemen were positioned on the rooftop of the Port Said Prison and the roofs of two police stations. Testimonies indicate that they shot “professionally” and aimed to kill. [DNE, 4/24/2013]

EU Poll: 59% of Egyptians trust the government, 26% trust political parties
Egyptians are unsure about the future, and about the possible role the European Union could play, according to a recently released Autumn 2012 EU Neighborhood Barometer for Egypt, conducted in the framework of an EU-funded opinion polling project for the Neighborhood. The survey, based on 1,000 interviews conducted in November-December 2012, finds that Egyptians are evenly split regarding the life they lead, with 51% satisfied and 49% dissatisfied. Most (63%) feel things are going in the wrong direction, with 61% saying the economic situation was bad, and opinions divided as to whether it would get better (46% better, 40% worse, 10% same); 57% of those asked were satisfied with the way democracy works in Egypt, against 42% who were dissatisfied. The poll found that 22% per cent of respondents felt the EU had good relations with Egypt, against just 9% bad, and 68% who didn’t know. The poll found that 19% of Egyptians trusted the EU – less than other international institutions like the Arab League (30%) and the UN (24%); there was strong trust in their own government (59%), but less so in Parliament (37%) or political parties (26%). [Shorouk (Arabic), EU Neighbourhood Info Center, 4/24/2013]

Hagel meets Morsi, Sisi in Egypt, reaffirms military ties with Egypt
US Defense Secretary Chuck Hagel underscored Washington’s military commitment to Egypt on Wednesday and pledged American support as Egyptian forces evolve to address new and shifting security threats, U.S. defense officials said. "I wanted to stop in Egypt to … reaffirm American commitment to Egypt’s emerging democracy, encourage the democratic and economic reforms that are underway here," Hagel said. He urged Egypt’s Islamist-led government to press ahead with reforms during his visit, as well as discussing means of expanding military cooperation between Egypt and the US. Hagel also addressed regional issues including Syria’s possible use of chemical weapons as well as the Israeli-Palestinian issue. [Reuters, AFP/DNE, Egypt Independent, SIS, Department of Defense, Shorouk (Arabic), 4/24/2013]

Trade and industry minister seeks closer Egypt-Saudi ties
Trade and Industry Ministry Hatem Saleh said Egypt and Saudi Arabia are seeking to further develop ties in different fields, and highlighted a planned rail link between the two countries as an example of closer relations. Saleh added that bilateral trade is growing, reaching US$4.5 billion last year and projecting that it would reach $5 billion this year, which is nonetheless still below both countries’ capacities. Saleh also said that ties between the both countries are “based on equality.” Meanwhile, Saudi Arabia’s Minister of Commerce and Industry said Saudi-owned projects worth 5 billion riyals ($1.3bn) have stalled in Egypt, with at least 20 projects pending.
[Egypt Independent, Al Arabiya, Shorouk (Arabic), 4/24/2013]