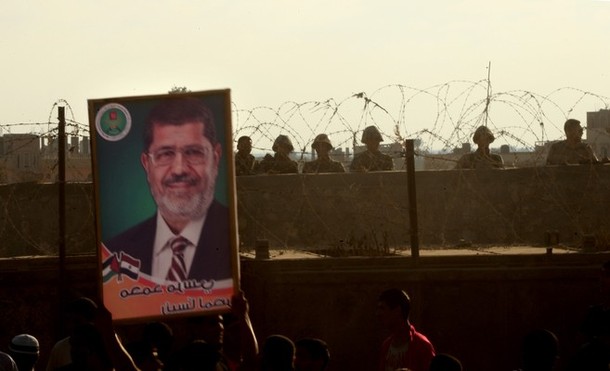 [Al Ahram (Arabic), Egypt Independent, 7/22/2012] The Constituent Assembly discussed the role of the military in the new constitution at its meeting Monday, Al-Masry Al-Youm reported. It also discussed a proposal put forward by the Supreme Council of the Armed Forces and assembly member Mamdouh Shahin that would grant the military substantial powers within the state. Wahid Abdel Meguid, spokesman for the Constituent Assembly, said on Sunday that the proposals submitted to assembly for the new constitution grant the military no special privileges. Constituent Assembly member and Wasat Party leader Mohamed Mahsoub told Al-Shorouk that three principles had been previous agreed upon, "The army shall not interfere in politics, shall be under the political leadership, and its value and status shall remain untouchable."

[Egypt Independent, 7/23/2012] Members of Egypt’s Constituent Assembly – tasked with drafting a new constitution – met on Sunday with the representative of 18 Egyptian human rights organisations to discuss Egypt’s next national charter. Present at Sunday’s meeting were the representatives of a number of local NGOs, including the Nadeem Centre for the Rehabilitation of Victims of Violence, the Hisham Mubarak Law Centre and the Institute for Freedom of Thought and Expression. According to proposals committee member Khaled El-Azhari, rights organisations on Sunday made suggestions and presented different perspectives concerning Egypt’s future constitution.

Brotherhood figure: Group will have 10 ministers in new cabinet

[Egypt Independent, 7/22/2012] Medhat al-Haddad, who heads the Muslim Brotherhood’s administrative office in Alexandria, has told Al-Masry Al-Youm that the Freedom and Justice Party will run 10 ministries in the new cabinet, after coordinating with other political parties and individuals. Haddad said Osama Yassin, Saad al-Hosseiny and Hussein Ibrahim are among the FJP nominees for ministers of youth, finance and manpower respectively. Referring to conflicts within the presidential office over appointing Mahmoud Abouel Oyoun, former governor of the Central Bank of Egypt, to the post of prime minister, Haddad said President Mohamed Morsy hadn’t made the final decision yet.

[Al Ahram (Arabic), Ahram Online, 7/22/2012] Thousands of workers at the Mahalla Misr Spinning and Weaving Company have suspended on Sunday their strike after a meeting with President Mohamed Morsi’s legal advisor, according to Kamal Fayoumi, a labour union figure in Mahalla. The company’s administration issued a statement Sunday evening agreeing to a number of the workers’ demands including the increase in profit sharing and fixed raises, as well as healthcare reform procedures in the company’s hospital. The company, which employs some 24,000 people and is the largest textile manufacturer Egypt, has seen a series of strikes over similar demands within the last 18 months.

[Al Shorouk (Arabic), Daily News Egypt, 7/22/2012] Recent power cuts across many Egyptian governorates, including Cairo, have driven many frustrated civilians to protest inadequate infrastructure. Many of the protesters have also threatened to not pay their electricity bills until this issue can be resolved. The Minister of Electricity, Hassan Younis, held several meetings to address the issue and declared a state of emergency, especially in peak times. According to him, the government policy at this point in time is to ration power consumption.

[Al Sharq Al Awsat (Arabic), Egypt Independent, 7/22/2012] The pipeline transporting Egyptian natural gas to Israel has been bombed for the 15th time since the January uprising last year, according to North Sinai Governorate sources. The explosion, which took place in the Taweel area, 10 km east of Arish city, would appear to confirm that gas exports to Israel have restarted. However, Mohamed Ayyoub, head of the Gasco Company in Arish, denied that exports had restarted, saying the gas inside the pipeline was left from before Egypt had announced it was halting gas exports.  According to sources, the company continues to pump gas to keep the equipment efficient but does not pump the gas to Israel.

[Daily News Egypt, 7/23/2012] An official at the National Bank of Egypt (NBE) stated that the bank is currently conducting studies into providing an additional EGP 300million for tourist projects in Marsa Alam and Taba. The official said that the NBE recently provided EGP 1million to the two cities, mostly for hotels to upgrade their insurance and strengthen security. NBE postponed EGP 2 billion in payments from tourist companies during the last year and a half because of the difficult circumstances facing the sector since the revolution. The bank succeeded in arriving at 1800 settlements during the last year and a half, recovering EGP 6.5 billion.

[Egypt Independent, 7/23/2012] Foreign Minister Mohamed Kamel Amr met with Qatari Emir Sheikh Hamad bin Khalifa al-Thani Sunday in Doha, where he invited the emir to visit Egypt. The invitation came from President Mohamed Morsy while Amr was participating in the emergency ministerial meeting being held by the Arab League in the Qatari capital. The Qatari emir confirmed his country’s readiness to increase its investments in Egypt in the near future.

[Egypt Independent, 7/23/2012] Egypt intends to send two delegations to the Gaza Strip and the West Bank to discuss Palestinian reconciliation, Hamas political bureau member Mahmoud al-Zahar said Sunday. Zahar told Palestinian news agency Maan News that the move comes in response to a suggestion made by Hamas leader Khaled Meshaal during his recent meeting with Egyptian President Mohamed Morsy. Zahar said last week’s visit to Egypt had been positive, adding that Hamas agreed with Egyptian officials in principle about lifting the blockade on Gaza, without discussing specific methods for implementing such a measure.

[Egypt Independent, 7/22/2012] Tunisia has told the Egyptian Embassy in Tunis that it is concerned about the frequent illegal entry of Egyptian sailboats into Tunisian waters, sources from the Egyptian Foreign Ministry have said. The Tunisian authorities have threatened tougher punishments for detained boat captains, claiming that one sailor, Mohamed Hassan, intentionally hit a Tunisian military vessel trying to intercept him. Egyptian Ambassador to Tunisia Ahmed Ismail Abdel Moety said that frequent violations by Egyptian vessels has made the embassy’s mission difficult.