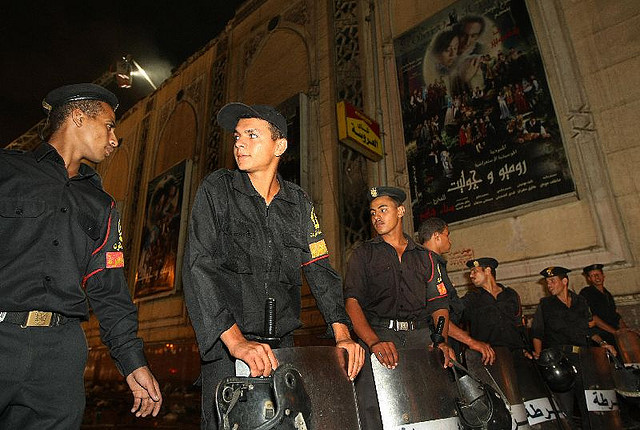 Interior Minister Mohamed Ibrahim called on Islamists not to stage any protests on June 30, as clashes between supporters and opponents of President Mohamed Morsi would be tantamount to a “furnace of war.” Ibrahim also called on secular forces not to protest on June 21, a day on which Islamists have planned protests.

Shura Council agrees on amendments to NGO law
Egypt’s Shura Council agreed in principle on Monday on amendments to the civil society law, the state news agency MENA reported. The Shura Council will discuss the amendments further in upcoming sessions. Ahmed Fahmi, Shura Council chairman and leading member of the Muslim Brotherhood’s Freedom and Justice Party (FJP), said that "after being approved in principle, the new NGO law will now be referred back to the Shura Council’s human resources committee for article-by-article review and discussion." Mahmoud Abdel-Azim, committee chairman and leading member of the ultra-conservative Salafist Nour Party, said the new law would give citizens the right to establish NGOs "by merely notifying" the government and without obliging them to follow the procedures required by the earlier 2002 law. Many liberal-minded MPs, however, also voiced support for the draft law. Abdel-Moneim al-Tunsi, representative of the secular Ghad al-Thawra Party, said that "the new NGO draft law says goodbye to supervision by the state security apparatus over civil society; Egyptians will be free to establish NGOs." [Aswat Masriya, Ahram Online, Ahram (Arabic), 6/18/2013]

Salafist Nour calls for Brotherhood concessions ahead of June 30 protests
The Salafist Nour Party has called on the Muslim Brotherhood to ease tensions with the opposition prior to demonstrations against President Mohamed Morsi on June 30, the anniversary of his inauguration. The advice was made during a meeting between the groups in Alexandria, a Nour Party member told al-Ahram Arabic news website on Monday. The main purpose of the meeting, the source explained, was to discuss the Nour Party’s position towards the planned protests. In a statement released Tuesday, the movement clarified its members will not participate in any demonstrations that oppose or support the June 30 protests, warning that violent rhetoric and mobilization on both sides will divide the nation. The moderate Strong Egypt Party, however, said it supports a policy of "peaceful change" through its participation in anti-government protests on June 30, but stands against calls for a "military coup" as an alternative to President Mohamed Morsi’s rule. [Ahram Online, 6/18/2013]

Demonstrators protest against Luxor governor, Nour Party calls on Morsi to reconsider governor of Beheira
Newly-appointed Luxor Governor Adel Asaad said he would boost tourism in the governorate, stressing that his allegiance is to the Egyptian people, not to Jama’a al-Islamiya. A decision by President Mohamed Morsi to appoint seven Muslim Brotherhood-affiliated governors sparked controversy Monday, focusing on the appointment of Asaad, a Jama’a al-Islamiya official who has been implicated in the 1997 terror attack in Luxor, which killed sixty-two people, many of them foreign tourists. Demonstrators in Luxor staged a protest on Monday at the city council to protest the appointment of Asaad al-Khayyat as the city’s new governor. An official Luxor governorate source told Ahram Online on condition of anonymity that protesters had raised placards reading: "We don’t want terrorists" and "The government has replaced an ambassador with a terrorist." Additionally, the Nour Party calls on Morsi to reconsider the new appointment of the governor of Beheira stating that this governorate has witnessed violence and that this decision could fuel this violence as June 30 approaches. [Egypt Independent, Aswat Masriya, Ahram (Arabic), ONA (Arabic), Ahram Online, 6/18/2013]

Egypt top prosecutor refers complaint against Morsi to supreme prosecution
Egypt’s Prosecutor-General referred a complaint against the Egyptian President Mohamed Morsi to the Supreme State Security Prosecution on Monday. The complaint, filed by political activist Yasser Abdel-Hafiz, a member of the Revolutionary Youth Coalition and the Constitution Party, accuses the president of treason, neglecting national security, failing to protect public properties, and not holding his allies accountable after they besieged the courts. The complaint also questions the constitutionality of Morsi’s Prosecutor-General appointment. [Ahram Online, 6/17/2013]

Interior minister: Islamists should not protest on June 30
Interior Minister Mohamed Ibrahim called on Islamists not to stage any protests on June 30, as clashes between supporters and opponents of President Mohamed Morsi would be tantamount to a “furnace of war.” Ibrahim also called on secular forces not to protest on June 21, a day on which Islamists have planned protests. Ibrahim has said that the security preparations for upcoming anti-government protests on June 30 will entail the closing down of tunnels and ferries over the Suez Canal that connect Sinai to the rest of Egypt, to prevent the crossing of jihadists. He also said the Republican Guards will be responsible for securing the Presidential Palace during planned protests on June 30. The Central Bank of Egypt (CBE) and the State-run television building will be secured by the army, he added. The minister assured the CBC satellite channel on Monday evening that prisons are a "red line" and will not be stormed during demonstrations planned for the end of this month. [Egypt Independent, Ahram Online, SIS, Aswat Masriya, Youm7 (Arabic), 6/18/2013]

Egypt sends IMF final amendments to its economic program – Minister
Egypt sent the International Monetary Fund (IMF) the final amendments and the full details of its economic reform program on Saturday, the country’s minister of planning told Amwal al-Ghad. Dr. Amr Darrag, Egyptian Minister of Planning and International Cooperation, noted that the government is expecting within the upcoming period IMF’s response to the country’s long-awaited US$ 4.8 billion loan request. In a statement to the Turkish Anadolu news agency, Darrag added that political instability in Egypt is unlikely to impact negotiations with the IMF, and that he expects the loan deal to be sealed within weeks. [Amwal al-Ghad, Egypt Independent, 6/18/2013]

Egypt investment minister aims for 7 percent growth in two years
Egyptian Investment Minister Yehia Hamed said on Monday he aimed to boost Egypt’s anemic economic growth to as high as 7 percent in two years by improving the environment for private investors. He said he would work out reconciliation agreements with business people who had fled abroad or were suffering legal problems since the 2011 uprising that ousted Hosni Mubarak. "Next year we aspire to have 3.7 or 4 percent GDP and the year after we aspire to touch base with 6.5 and 7 percent," Hamed told the American Chamber of Commerce in Egypt. His numbers seemed ambitious, given that ten economists polled by Reuters in April expected the economy to grow by 2 percent in the fiscal year to June 30, 2013, and 3 percent in the year ending June 2014, revising down their forecasts from the previous September. [Reuters, 6/17/2013]

Tamarod refuses partial solutions: Presidential council and technocrat government following June 30
The Tamarod (Rebel) campaign aiming to withdraw confidence from President Mohamed Morsi said it would not accept anything less than the formation of a presidential council, and the formation of a technocrat government. Tamarod spokesperson Mohamed Abdel Aziz said that partial solutions, including allowing Morsi or the Shura Council to supervise early presidential elections, would not be acceptable. Meanwhile, twenty-five human rights organizations, among them the Egyptian Organization for Human Rights, have called on Egypt’s armed forces to protect the June 30 protests. The statement also called on the Minister of Interior to provide protection, and to refrain from using violence against peaceful protesters. [AMAY (Arabic), ONA (Arabic), 6/18/2013]

Ethiopia, Egypt tone down talk of war over Nile dam
Ethiopia and Egypt cooled talk of war on Tuesday and agreed to more dialogue to resolve a row over a giant dam that the Horn of Africa nation is building on the Nile, on which Egyptians depend on for almost all their water. Foreign Minister Mohamed Kamel Amr said his talks with his Ethiopian counterpart Tedros Adhanom were explicit, clear and constructive. Egyptian Foreign Ministry Spokesman Badr Abdel Aty announced "The talks are taking place in a positive atmosphere and a spirit of cooperation.” Ethiopian foreign minister is expected to visit Cairo soon to continue talks after his Egyptian counterpart visited Addis Ababa. Catherine Ashton expected in Egypt Tuesday to discuss Ethiopia dam row and Syria crisis with President Morsi, FM Mohamed Kamel Amr and handful of opposition figures.
[Reuters, SIS, Ahram Online, AMAY (Arabic), Aswat Masriya, 6/18/2013]

EU ambassador: Egypt important partner for settlement in Syria
European Union’s Foreign Policy Chief Catherine Ashton will embark on June 18 on a visit to Egypt as part of a wider tour of the Middle East. During her two-day visit, Ashton is expected to meet with President Mohamed Morsi and Foreign Minister Mohamed Kamel Amr as well as Egyptian opposition figures to tackle relations between Egypt and the EU, said Ambassador James Moran, Head of Delegation of the EU to Egypt. He pointed out that her talks in Egypt are expected to touch on the Egyptian stance on the Syrian conflict and the planned Geneva II conference to push for a peaceful settlement in Syria. Also, the Egyptian chargé d’affaires in Damascus, Alaa Abdel Aziz, and the rest of the embassy staff have safely left Syria, a source at the Egyptian foreign ministry told MENA on Monday. [SIS, Ahram Online, 6/18/2013]