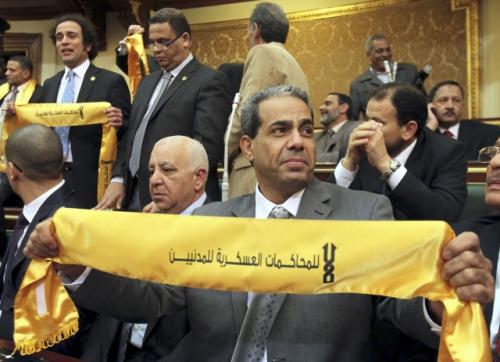 Egypt’s newly elected 508-member People’s Assembly convened for its first session on January 23. New parliamentarians will take their constitutional oaths, followed by the election of a parliamentary speaker and two deputies.

1) On January 22, several political groups announced a new initiative calling for an immediate transfer of executive power from the SCAF to the newly elected People’s Assembly. Supporters of the initiative, including the April 6 Movement, the Free Front for Peaceful Change, and the Popular Movement for the Independence of al-Azhar, are organizing several protests and marches to coincide with the inaugural session of the People’s Assembly on January 23. Three separate demonstrations, dubbed  “Retribution,” “Social Justice” (planned by the Union of Independent Workers) and “No to Military Trials” will start from Abdel Moneim Riad Square, Qasr Al-Aini, and the High Court of Justice, respectively, and converge on the parliament building. [The Daily News Egypt, English, 1/23/2012] [al-Ahram, English, 1/23/2012]