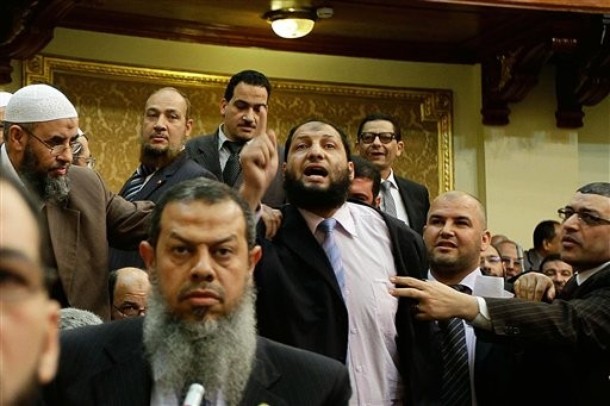 Parliamentary sources reported that the Muslim Brotherhood and Salafi Nour Party may be working on a deal to control a combined 75 percent of the seats in the 100-member constituent assembly.

2) The People’s Assembly Suggestions and Complaints Committee approved a bill submitted by independent MP Mostafa Bakry to amend Article 20 of the law regulating presidential elections to allow for a longer campaign period. The amendment would enable presidential candidates to begin their presidential campaigns when registration for the race begins and requires that campaigns be suspended two days before polling starts. [al-Masry al-Youm, English, 3/21/2012]

3) Presidential candidate Moneim Abouel Fotouh accused the U.S. of pouring “billions of its money in collaboration with enemies of our country and the revolution so as to appoint a president who matches its interests” and elect one of the “devils” of the former regime. [al-Masry al-Youm, English, 3/21/2012]

4) The legislative Committee in the People’s Assembly agreed to annul Article 6 of the military judicial law, which gives the president the jurisdiction to refer civilians to military courts. [The Daily News Egypt, English, 3/21/2012]

5) 17 activists and legal scholars filed a joint lawsuit with the Cairo Administrative Court against the SCAF and parliament, claiming that the FJP-backed plan for selection the Constituent Assembly violates the equal opportunity principle outlined in the interim constitution. [al-Masry al-Youm, Arabic, 3/21/2012] [al-Masry al-Youm, English, 3/21/2012]

6) Parliament began receiving nominations for members of the constituent assembly last week. The committee will include 50 MPs and 50 members chosen from outside parliament. The Adl Party has announced its 25 nominees, including Mohamed ElBaradei , Ahmed Zewail, Galal Amin, Noha El-Zeiny, Alaa Aswany and George Ishak. [al-Ahram, English, 3/21/2012]

7) Israel has cleared out its embassy in Egypt, six months after its offices were attacked by protesters. Egyptian officials said two Israeli military planes left Cairo loaded with documents and equipment removed from the embassy. An Israel diplomat says the embassy had not been in use since September. [Washington Post, English, 3/21/2012]