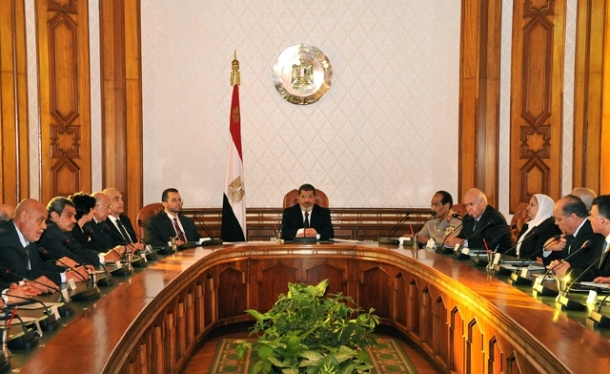 Minister of Justice Ahmed Mekki will transfer authority over the Judicial Inspection Directorate from the Ministry of Justice to the Supreme Council of the Judiciary (SCJ), effectively ending one of the main ways the executive branch controlled the judiciary.

[Egypt Independent, 8/15/2012] Minister of Telecommunications and Information Technology Hany Mahmoud said his ministry has prepared a freedom of information bill and plans to open it to public debate after the holy Muslim feast of Eid al-Fitr, which is expected to begin on Sunday. Mahmoud said the bill does not handle how the media can obtain information because that issue is expected to fall under separate legislation to be proposed by the Journalists Syndicate.

[Reuters, 8/14/2012] An Egyptian court is to hear the first legal challenge to a decree issued by Islamist President Mohamed Mursi that removed curbs on his powers imposed by the army. The challenge was filed in Egypt’s administrative court by Mohamed Salem, a lawyer who has already tried to have Mursi’s children, two of whom hold Egyptian and U.S. passports, stripped of their Egyptian nationality.

[Ahram Online, Al Masry Al Youm (Arabic), 8/15/2012]  Minister of Justice Ahmed Mekki will transfer authority over the Judicial Inspection Directorate from the Ministry of Justice to the Supreme Council of the Judiciary (SCJ), effectively ending one of the main ways the executive branch controlled the judiciary. In a letter Mekki sent to Chairman of the Cassation Court and the SCJ, Justice Minister Mohamed Momtaz Motwaly said he was working on a law that would transfer control over the Judicial Inspection Directorate to the courts. Mekki came under fire today from the Supreme Constitutional Court for comments criticizing rulings that interfered with the political process.

[Ahram Online, 8/15/2012]  Egyptian writer and novelist Youseef El-Qaeed told Ahram Online that state-owned newspaper Al-Akhbar refused to publish Sunday his latest article in which he criticises the Muslim Brotherhood. The paper’s new editor-in-chief Mohamed Hassan El-Banna, who was recently appointed by the Brotherhood dominated Shura Council (upper house of Egypt’s parliament), denied the ban saying that the newspaper had not receive any articles from the writer.

[AP, EGYNews (Arabic), 8/15/2012]  A fringe group so extreme that it worries even Egypt’s Muslim ultraconservatives is secretly reviving itself with greater firepower and followers in the country’s volatile Sinai Peninsula. Followers of the group known as Takfir wil-Hijra, dubbed "Takfiris", lead secretive, isolated lives where anything and anyone that does not adhere to their limited interpretation of the Quran is deemed heretical. They dream of a puritanical Islamic state in Sinai. U.S. Secretary of Defense Leon Panetta said that the Pentagon has yet to send additional U.S. troops to help secure Sinai, but that he had sent mobile tracking systems to enable troops to track friendly forces.

[Reuters, 8/15/2012]  International Monetary Fund chief Christine Lagarde will visit Egypt next week in a show of IMF support for Egypt’s transition, the Fund said on Wednesday. Egypt will discuss the possibility of a bigger-than-expected $4.8 billion loan from the International Monetary Fund when a delegation from the Washington-based body visits Cairo this month, its finance minister said.

[Ahram Online, EGYNews (Arabic), 8/15/2012]  President Mohamed Morsi emphasised the importance of Egypt, Saudi Arabia, Turkey and Iran working together to solve the Syrian crisis during a speech at the Organization of Islamic Cooperation’s (OIC) two-day summit in Mecca, Tuesday night. "It is time for the Syrian regime to leave," said Morsi during what is considered to be his debut appearance at a key international event since assuming the presidency and the first time in Egyptian history that a head of state has called for the end of President Bashar Al-Assad’s regime. The Supreme Council of the Armed Forces, who were de facto rulers of Egypt following the ouster of Hosni Mubarak last year, refrained from making a public statement on the issue during their 18 months in power.