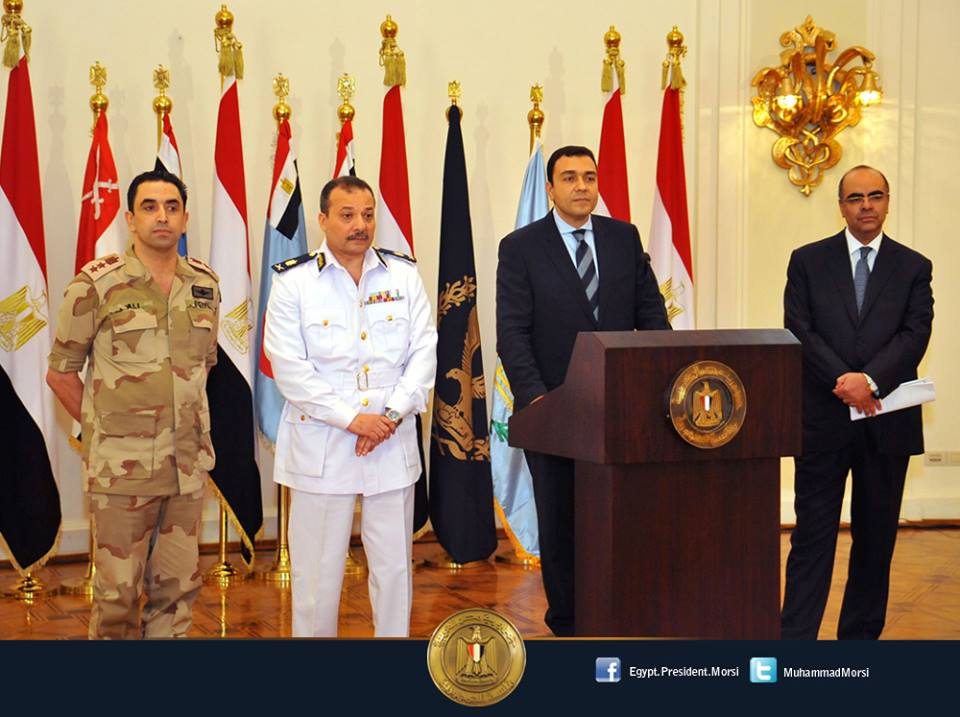 Seven members of the Egyptian security forces kidnapped by Islamist militants in Sinai last week were freed on Wednesday and President Mohamed Morsi announced a new crackdown on lawlessness in the desert peninsula.

Morsi thanks military and police for successful rescue operation
President Mohamed Morsi has praised all those who helped secure the release of seven hostages in the Sinai Peninsula. President Morsi thanked the military, interior ministry, general intelligence services and government for securing the hostages’ release without bloodshed. However, the kidnapping and Egypt’s response to the crisis is said to have aggravated tensions between President Morsi and Defense Minister Abdel-Fattah al-Sisi, according to military sources. Morsi also paid tribute to local tribal sheikhs for their support. He met the seven freed soldiers who had been kidnapped since Thursday in Sinai at the Almaza military airport. Presidential spokesman Ihab Fahmi underlined the fact that the soldiers were released without the state offering any concessions to the kidnappers. Meanwhile, Morsi urged everyone who has weapons in the Sinai Peninsula to hand them over on Wednesday, saying that only the authorities should be armed. [Ahram Online, SIS, DNE,  Aswat Masriya, Ahram (Arabic), EGYNews (Arabic), 5/22/2013]

Political forces react to the Sinai rescue operation
The Islamist Construction and Development Party described the release of the seven kidnapped soldiers as a victory for President Morsi. The Freedom and Justice Party praised Sinai tribal sheikhs for their role in the release of the soldiers. Nour Party leader Younis Makhyoun described the release of the soldiers as an opportunity for national reconciliation, as it presents the possibility of real cooperation between political forces. Meanwhile, Shura Council members called on Morsi to reveal the details of the soldiers’ release, as well as the fate of their kidnappers. Before their release, the National Salvation Front (NSF) stated on Tuesday that its main concern is the preservation of Egypt’s national security and sovereignty in Sinai, adding that it’s the people’s right to be transparently informed with the situation in Sinai, specifically in regards to the presence of terrorist and criminal cells and their connections beyond Egypt’s borders. Speaking after their release, the NSF in Suez said that the military’s success in releasing the soldiers maintained the prestige of the state, underlining the people’s confidence in the armed forces. [DNE, ONA (Arabic),  Ahram (Arabic), AMAY (Arabic), Shorouk (Arabic), 5/22/2013]

TV presenters investigated for Tamarod support
Prosecutor General Tala’at Abdallah has opened an investigation against two TV presenters and the founders of the Tamarod petition campaign on Monday. The complaint that led to the investigation accused TV hosts Amr Adib and Mohamed Mostafa Sherdy, along with three founders of Tamarod for inciting and mobilizing people to overthrow an elected government, inciting hatred against the regime, and promoting a group suspected of violating the law, according to state-owned al-Ahram. During the two TV presenters’ program on al-Youm channel al-Qahira al-Youm, Sherdy responded to the investigation by filling a Tamarod form on the air. [DNE, 5/21/2013]

IMF says Egypt budget gap worrying
Egypt’s worsening fiscal gap is a concern but the International Monetary Fund is still ready to continue talks on a $4.8 billion loan once Cairo completes a review of its economic program, a senior IMF official said. "We are ready to engage with them on reviewing and finalizing the program as soon as they completed it," Masood Ahmed, IMF Director for the Middle East and North Africa, told Reuters in an interview on Tuesday. The IMF expects Egypt’s budget deficit to widen to 11.3 percent of gross domestic product in the fiscal year, which ends in June, the largest gap since 2002, from 10.7 percent in the previous year, it said in a regional outlook published earlier on Tuesday. [Reuters, 5/21/2013]

After power cuts, Egypt govt calls on citizens to ration electricity
Egypt’s electricity ministry on Tuesday apologized for a recent spate of nationwide power cuts, which the ministry attributed to ongoing fuel shortages. In an official statement, the ministry ascribed recent power outages to "fuel shortages that have made it difficult for allocated generators to keep up with mounting consumption." Egypt’s state-run National Energy Control Centre, the statement explained, "calls on the citizenry to ration their use of electricity, especially the use of air conditioners and heaters." Ahmed Imam, Egypt’s Electricity and Energy Minister, recently stated that electricity subsidies are set to increase over the coming fiscal year to EGP 23bn, which will also include the cost of fuel used to operate electricity production stations. These statements came during a symposium organized by imams and preachers from Egypt’s Ministry of Endowments, attended by a total of 55 religious leaders, engineers and businessmen. Alexandrians protested the power outages by holding a demonstration in large front of the electricity distribution headquarters. [Ahram Online, DNE, Ahram (Arabic), 5/22/2013]

New Egypt tax law has cuts for poor, hikes rates for businesses, leaves wealthiest unchanged
Egypt’s president signed a new tax law Tuesday that cuts the amount paid by poorer Egyptians in the latest move aimed at reforming the country’s economy. The changes, which are more favorable than the previous tax law for the country’s most vulnerable, could boost Islamists in parliamentary elections slated for later this year. The law stipulates that anyone who earns 5,000 EGP or less a year ($716) will be exempt from paying income tax — as it was under ousted President Hosni Mubarak. The Federation of Egyptian Banks rejected the new tax law, saying that it violates international law, while Ahmed al-Sayyed al-Naggar, an economic expert at the Ahram Center for Political and Strategic Studies, argued that the tax reforms target an already struggling middle class, but leave the country’s richest people untouched. However, the new tax law may also help reduce a burgeoning budget deficit projected to reach $28.5 billion in the coming fiscal year, around $1.7 billion more than this year. According to economist, Wael Gamal, the law will benefit the country’s poor and could help improve their living conditions. [AP, AMAY (Arabic), 5/21/2013]

Subsidy reforms mix uneasily with Egyptian electoral politics
Minister for Internal Trade and Supply Bassem Ouda has started his new campaign to reform subsidized food and bread distribution. Ouda, who was appointed in January, has modified the bread subsidy system and is leading plans to enhance the quality of subsidized products, as well as to update recipients’ databases. His efforts have helped reduce bread queues and control smuggling of subsidized flour, amid deteriorating economic conditions sparked by the political instability, experts say. Critics see the fanfare accompanying the supply ministry’s new efforts as part of an attempt to shore up Morsi’s fading popularity. Activists on Facebook shared pictures of bread distribution cards with the logo of the Freedom and Justice Party and Ouda’s name on them, highlighting fears the party would use the ministry for its political interests. [Ahram Online, 5/21/2013]

Militants release seven Egyptians kidnapped in Sinai, operations continue
Seven members of the Egyptian security forces kidnapped by Islamist militants in Sinai last week were freed on Wednesday and President Mohamed Morsi announced a new crackdown on lawlessness in the desert peninsula. "I call on everyone in Sinai who has weapons to turn them in. This nation is bigger than all of us and weapons can only be in the hands of the government," Morsi said after greeting the ex-hostages on their arrival at a military airport in Cairo. Egyptian authorities will continue to combat outlaws in the Sinai Peninsula, North Sinai security chief Samih Bashadi said on Wednesday. The kidnappers had demanded the release of six Tawhid wal Jihad members sentenced to death last September for attacking police in North Sinai in 2011, killing seven people. The captives were let go without the kidnappers’ demands being met, according to a security official and a Bedouin sheikh involved in the mediation. The militants had decided to release them fearing a confrontation with the armed forces. An Egyptian presidential spokesman said there had been no bargaining or deal with the militants. Egypt’s Rafah border crossing with Gaza was reopened on Wednesday after Egyptian guards ended their five-day strike. A Sinai activist confirmed that no military operation took place to release the abductees, but said that the bedouins will not abide by Morsi’s request to give up their arms. [Reuters, Ahram Online, Aswat Masriya, DNE, Ahram (Arabic), AMAY (Arabic), SIS, Watan (Arabic), 5/22/2013]

Egyptian authorities deny killing gunman in Sinai
A state-owned news channel reported that a gunman was killed during the military operation conducted to free the seven kidnapped security officers. The televised report added that three other militants were arrested and eight cars seized. Egyptian security sources, however, denied killing a gunman in an airstrike in northern Sinai, saying that the security forces mistakenly fired on a funeral during a sweep search for the security personnel who were kidnapped on Thursday. [Aswat Masriya, Ahram Online, 5/21/2013]

New al-Azhar food poisoning incident ‘premeditated’: official
Deputy of al-Azhar University in Tanta Ahmed Hosni has alleged that dinner served at one of the university’s dormitories in Cairo had been intentionally  ‘poisoned,’ but maintains that the dormitory’s kitchen staff was not responsible. "University kitchens use natural gas, not kerosene," Hosni told al-Ahram’s Arabic-language news website on Tuesday. "The kerosene found in the beans served to students in the Nasr City dormitories means that the kerosene was put in the food by someone not from our staff." An official al-Azhar dormitories source had earlier said that initial tests had shown no contamination had taken place, asserting that the smell of kerosene may have come from a gas stove on which the beans had been cooked. [Ahram Online, 5/21/2013]

US report on status of religious freedom in Egypt
The United States Department of State published its annual International Religious Freedom Report for 2012 on Monday. The section of the report regarding Egypt said that while the constitution includes provisions for freedom of religion, it also contains restrictions on these freedoms. The report highlights some of the major issues regarding freedom of religion in Egypt, such as sectarian divisions, recognition of religious minorities, the legal status of religion, anti-Semitism, and the government’s response to these issues. The report stressed that the US is supporting initiatives to increase religious freedoms in Egypt. [DNE, 5/21/2013]

Morsi meets Brahimi ahead of Friends of Syria meeting
President Mohamed Morsi met with United Nations and Arab League Special Envoy to Syria Lakhdar Brahimi at the presidential palace on Monday. According to his spokesperson, Brahimi is pleased that Egypt is restarting its quartet initiative. Brahimi and Morsi discussed the “latest developments in the efforts undertaken to resolve the Syrian crisis”, said a statement published by the presidency on Monday evening. Minister of Foreign Affairs Mohamed Kamel Amr also attended the meeting. [DNE, 5/21/2013]