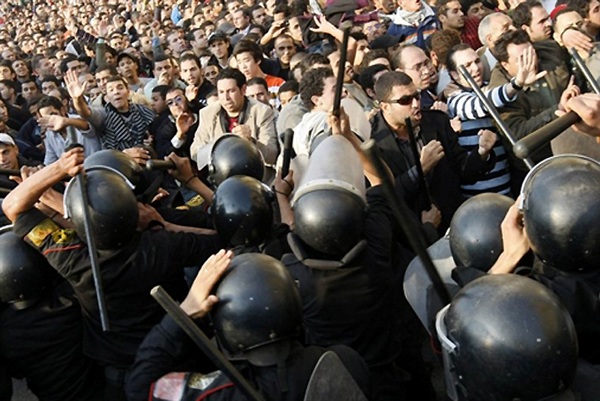 The Justice Ministry has drafted new legislation that would impose harsher punishments for police torture. The bill stipulates that in deaths resulting from police violence, the perpetrators will be charged with premeditated murder.

Ministry drafts harsher police torture penalties
The Justice Ministry has drafted new legislation that would impose harsher punishments for police torture. The bill stipulates that in deaths resulting from police violence, the perpetrators will be charged with premeditated murder, according to a copy obtained by Al-Masry Al-Youm. Police who are referred to court in such cases often face charges of beating the victim to death, which carries a lighter sentence than murder. [Egypt Independent, 11/8/2012]

Constituent Assembly may struggle to meet deadline
Disputes over controversial articles have raised doubts whether members of the assembly drafting Egypt’s new constitution will have the document ready by a 12 December, after which it is to be put to a referendum, officials say. Pressure is mounting on the 100-member assembly to finish before the deadline. But bickering between Islamists and liberals over subjects such as the role of Islam in politics, civic freedoms and women’s rights has delayed voting on individual articles in the charter. [Egypt Independent, Ahram Online, 11/8/2012]

TAQA power launches Egypt’s first privately owned power plant
TAQA power a branch of the Citadel Capital owned TAQA Arabia (formerly Global Energy) has announced the start of the commercial operations of its independent power plant (IPP). The Alexandria-based power plant is the first in the Egyptian private sector to provide electricity; the energy market has historically been under public domain. The company is the first to acquire a license to generate and produce electricity from the Egyptian Electric Utility Regulatory Agency, and the Consumer Protection Agency. [DNE, 11/8/2012]

Salafis to finance Sharia-friendly business
Egypt’s Salafis are branching out into business, bringing their ultraconservative teaching of Islam into the world of modern finance. The Salafi Dawah, the largest organization of ultraconservative Islamists in Egypt, founded a non-profit economic organization nine months ago that is nearing its formal launch early next year. In preparation, Salafi leaders have been gathering to talk business — from promoting religious pilgrimages to holding a televised competition for entrepreneurs. [Egypt Independent, 11/8/2012]

IMF loan does not mean return of foreign investment, experts say
Egypt’s leaders continued negotiations with an IMF delegation for a US$4.8 billion loan this week, sorting out the details of a large-scale economic reform program aimed at reducing the country’s growing deficit. The loan, which has been hailed as the country’s best and last hope to bring back foreign investment, is meant to help ease the government’s fiscal crisis, in addition to functioning as a stamp of approval for the country as a safe place for investment. [Egypt Independent, 11/7/2012]

Military forces upped in Sinai’s Al-Arish in the wake of increased attacks
In a report published Thursday by pan-Arab daily Al-Sharq Al-Awsat, a military source in North Sinai claimed that well-planned attacks are being carried out in North Sinai against senior officers who have been leading a campaign against jihadist elements in the peninsula. On Tuesday, the inspector of general security in North Sinai was shot in Al-Arish, sustaining injuries to his jaw and arm. The source further stated that there is proof to link the perpetrators of Saturday’s attack that killed three policemen and the group that targeted the security head Tuesday. [Ahram Online, 11/8/2012]

Public prosecutor orders search for police officers kidnapped in Sinai
Public prosecutor Abdel Meguid Mahmoud on Wednesday urged the Interior Ministry, the National Security Agency, the General Intelligence Services and the Armed Forces to search for the police officers who were kidnapped in Sinai in last February while guarding the Egyptian border in Rafah. News reports have said that four policemen are missing. Families of the missing policemen have accused the administration of neglecting their case. [Egypt Independent, 11/7/2012]

Accusations fly as faction moves to restrict Journalists Syndicate membership
Once again, the Journalists Syndicate is wracked by internal feuds. The leaking of a draft bill with amendments to the law regulating the syndicate’s internal affairs has renewed the chasm between the syndicate board members, exposing their ideological differences. The local press late last month released a detailed transcript of the bill, claiming it was prepared by the syndicate’s legislative committee for eventual discussion in Parliament. [Egypt Independent, 11/8/2012]

Patterson: Egyptian-American Relations Will Grow Stronger
The re-election of President Barack Obama for a second term in the United States will have a positive impact on US-Egyptian relations, Anne Patterson, the U.S Ambassador to Egypt affirmed on Wednesday. "I believe that the relations between the two countries will grow stronger in the coming period, but Egyptian-American relations are based mainly on U.S. support for Egypt regardless of the party that wins the elections…we believe that relations will be more powerful in Obama’s second term", she said in comments carried by state-owned news agency MENA. [Aswat Masriya, 11/7/2012]