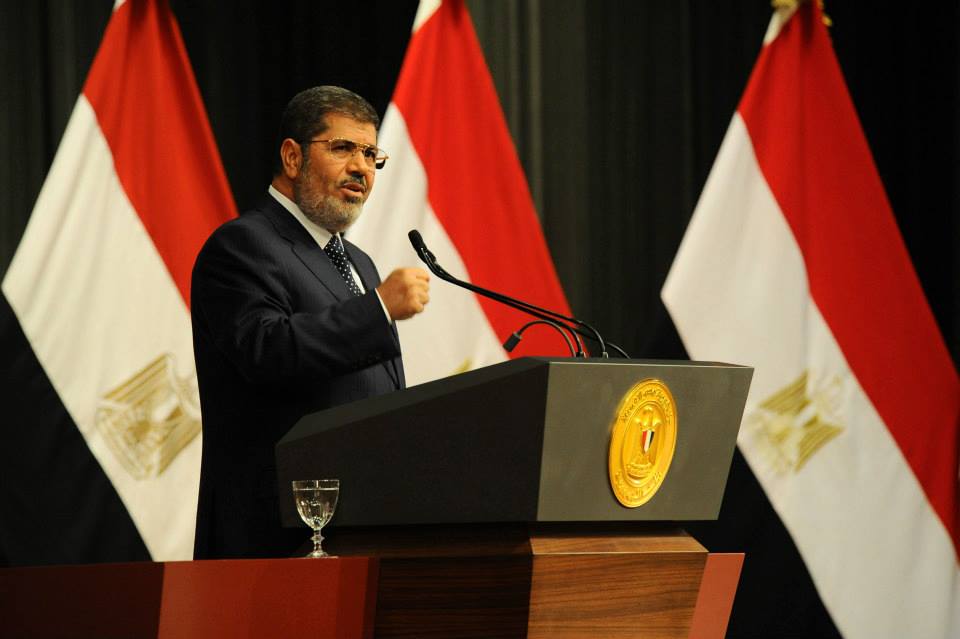 In a televised address lasting more than two and a half hours, President Mohamed Morsi blamed loyalists of fallen dictator Hosni Mubarak for the "paralysis" that has marked his first year in office but also offered an olive branch to opponents that also seemed to address demands from the army.

Morsi addresses people one year after taking power
In a televised address lasting more than two and a half hours, President Mohamed Morsi blamed loyalists of fallen dictator Hosni Mubarak for the "paralysis" that has marked his first year in office but also offered an olive branch to opponents that also seemed to address demands from the army. Morsi called on various political parties to take part in forming a new committee to amend the constitution and another for national reconciliation. He added that the polarized state of Egypt’s politics was threatening democracy and could plunge the nation into chaos. Morsi blamed "enemies of Egypt" for paralyzing its new democracy. He admitted errors and offered reform but was otherwise uncompromising in his denunciation of those he blamed—some by name—for wanting to "turn the clock back" to before the 2011 revolution against Hosni Mubarak. He pointed out that Shafiq must return and face trial for corruption charges. [Ahram Online, SIS, Aswat Masriya, Reuters, 6/27/2013]

Egypt opposition criticizes president’s speech
Opposition leaders criticized President Mohamed Morsi’s speech, saying they had heard nothing new, including any offer to include them in committees to draft institutional reforms and study "national reconciliation". Former foreign minister Amr Moussa criticized Morsi for not offering a "clear" economic recovery plan and blaming the nation’s woes on street protests and strikes. Abdel Moneim Abol Fotouh, a candidate in last year’s election and former Brotherhood member, says Morsi is running Egypt the way the Brotherhood runs itself, valuing loyalty over competence, with dire consequences for the country. Former member of parliament Amr Hamzawy described the speech as authoritarian, saying that there is no alternative to the demand for early presidential elections. Khaled Ali, a candidate in last year’s presidential elections, said that Morsi’s speech was detached from reality, adding that the Socialist Popular Alliance rejects a return to military rule. [AP, Reuters, 6/27/2013]

Watan Party proposes plan for economic recovery
The Watan Party proposed a new initiative to deal with the country’s political and economic crises at a Wednesday press conference ahead of planned mass demonstrations. The initiative was supported by nine Islamist parties, including the Brotherhood’s Freedom and Justice Party (FJP) and al-Jama’a al-Islamiya’s Building and Development Party, and was also approved by twelve Islamist movements, according to state-owned al-Ahram. The party detailed nine aspects of its initiative on Wednesday, including a national conference involving all political parties to discuss fundamental problems that had taken root over the past year, especially polarization surrounding proposed amendments to the judiciary law. Watan also suggested that this conference produce a roadmap for the next three years of Morsi’s presidency. [DNE, 6/26/2013]

Court orders information minister to repay EGP 269,000
The Administrative Judiciary Court in Alexandria ordered on Wednesday that Minister of Information Salah Abdel Maqsoud repay EGP 269,000 ($38,000) to the state’s treasury. The court ruled that incentive funds given to the minister were in violation of law No. 100 of 1987 as well as its amendments in the law no. 8 of 1989, which determines the salaries and the representation allowances for the executive authorities. The court ruling affirmed that high authorities including the president, vice president, chairmen of the upper and lower houses, prime minister and his deputies are not allowed to spend any funds not included in the governing law of their financial allowances. [DNE, 6/26/2013]

Egypt closer to sealing $1 billion Libya oil deal, as Tripoli mulls guarantee
State-owned Egyptian General Petroleum Corp. (EGPC) has asked the National Bank of Egypt for a $1 billion guarantee that will allow it to complete its side of the oil deal with Libya, a bank official said. However, the Libyan government has yet to decide that a letter of credit from that bank is strong enough to overcome the risk of any losses if EGPC is unable to pay for the oil. [Zawya DJ, 6/27/2013]

Military beefs up security ahead of protests
The military will take “all necessary measures” to secure the country ahead of the June 30 protests, the armed forces announced Wednesday amid a nationwide push to reinforce bases, major thoroughfares and vital institutions. The military began securing Media Production City in Cairo’s 6th of October City on Tuesday evening with armed vehicles and infantry in an effort “to allow media outlets to work with the utmost freedom,” reported state-owned news agency MENA. On Wednesday the military intensified security in the vicinity of the presidential palace and blocked entry roads, as well as the Maspero state-owned media building and the Central Bank of Egypt. The army also reinforced its presence in Port Said, received with cheers by residents. Meanwhile General Mohamad Zaki, the head of the presidential guard, said their forces will not clash with protesters on June 30, and that he does not expect protesters to use violence against them. He stressed that the mission of the presidential guard is to strictly face any attempt to break into presidential palace or any other building associated with the executive authority. [DNE, Ahram Online, SIS, Ahram Online, Shorouk (Arabic), 6/27/2013]

Morsi’s opponents pick holes in late-night speech
Egypt’s opposition figures slam President Morsi’s Wednesday speech that they say will contribute to mounting calls for his removal from power. Prominent writer Alaa al-Aswany slammed the speech as "miserable," predicting that June 30 demonstrations will put paid to Morsi’s rule. Over one thousand people gathered in Tahrir Square on Wednesday night to listen to the speech, but the speech was poorly received with people laughing and cursing and in some cases raising their shoes at him. Opinions in Tahrir varied regarding the prospect of possible military intervention in Egypt’s fraught political stage with some supporting the intervention and others were chanting against the military. Revolutionary forces in Beheira said that Morsi’s speech addressed his people, not the Egyptian people and a member of the 6th of April movement in Menoufiya said that the speech made him ashamed that Morsi was his president. Rights groups have also responded pointing out flaws in the speech and in some cases, wrong facts. The ‘No to Military Trials’ campaign criticised Morsi for claiming no civilians were tried by military courts during his first year in office stating that it is simply a false statement. [Ahram Online, DNE, AP, Reuters, 6/27/2013]

Clashes continue in Sharqiya, Alexandria, Mansoura, Zagazig
At least one person was killed and 298 injured in violence across Egypt’s Nile Delta late on Wednesday, health officials confirmed. In the Daqahliya governorate, 243 were injured, fifty-three in Sharqiya and two in Gharbiya, in clashes between supporters and opponents of President Mohamed Morsi. One death was confirmed Wednesday night after clashes following a rally to support Morsi in Mansoura. In Alexandria, Morsi’s supporters and opponents clashed, throwing rocks and firing shotguns early on Thursday as the Islamist president made a keynote speech in Cairo. There was no immediate information on casualties. Protests have continued as dozens of Egyptians attended a rally organized by the anti-government ‘Rebel’ campaign near Morsi’s private residence in Sharqiya on Wednesday evening to demand his ouster. [Ahram Online, DNE, Egypt Independent, Reuters, Aswat Masriya, 6/26/2013]

Rights groups say Egypt’s Brotherhood incites sectarian hatred
Human Rights Watch (HRW) accused Egypt’s ruling Muslim Brotherhood on Thursday of inciting religious hatred that led to the lynching of four Shiite Muslims in Cairo this week. “The brutal sectarian lynching of four Shia comes after two years of hate speech against the minority religious group, which the Muslim Brotherhood condoned and at times participated in,” said Joe Stork, deputy Middle East director at HRW. A member of the Shia community told Egyptian Initiative for Personal Rights (EIPR) that Salafis had organized demonstrations in the area on Friday May 24 and warned local residents in Abu Musallam of the presence of Shia Muslims. In EIPRs report they also accused the Muslim Brotherhood for incitement of sectarian hatred towards the Shia. [Reuters, DNE, 6/27/2013]