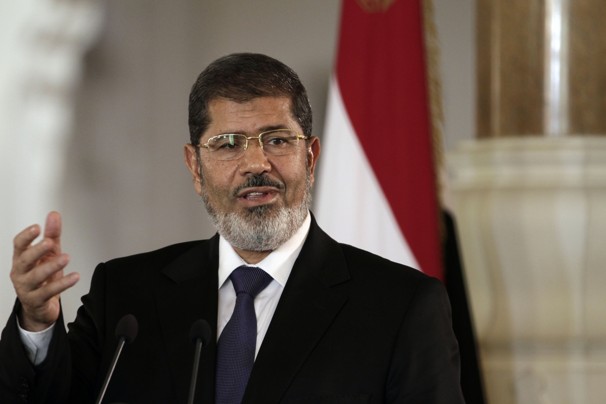 President Mohamed Morsy sent a message to US President Barack Obama Wednesday congratulating him on winning a second term in the US election the day before. Dr. Essam el-Erian, a leader of the Freedom and Justice Party, said in a statement to the BBC, "The Egyptian people and the world still wait for the change promised by President Obama, during his election campaign."

Morsi congratulates Obama on re-election, Erian skeptical
President Mohamed Morsy sent a message to US President Barack Obama Wednesday congratulating him on winning a second term in the US election the day before. Morsy said he hoped both countries would reinforce bilateral relations to achieve common goals of justice and peace, according to presidential spokesperson Yasser Ali. Dr. Essam el-Erian, a leader of the Freedom and Justice Party, said in a statement to the BBC, "The Egyptian people and the world still wait for the change promised by President Obama, during his election campaign." [Egypt Independent, Reuters, Shorouk (Arabic), 11/7/2012]

Nour Party holds rallies to boost popularity
The Salafi Dawah led a number of rallies featuring notable Salafi preachers across Egypt seeking to boost the Nour Party’s popularity ahead of the parliamentary elections. A source close to the Salafi Dawah said the preachers, including Yasser Borhamy, Saeed Abdel Azeem, Ahmed Fareed, and Ahmed Abu Hotaiba, decided to participate in the rallies in different governorates to restore the party’s reputation after the actions of some former MPs and internal disputes affected it. [Egypt Independent, 11/6/2012]

El-Erian: Egyptian constitution will be ready in a few weeks
Essam El-Erian, vice chairman of the Freedom and Justice Party, stated on Tuesday that Egypt’s constitution will be ready for a nation-wide referendum in matter of weeks. "No one can force their views on the people regarding the constitution. If they agree on it then they do so with free will; if they object to it then that’s a different path," said El-Erian in a statement to the media. The leading Brotherhood member has expressed his satisfaction with the current constitution which was drafted by an elected assembly. [Ahram Online, 11/6/2012]

Court reinstates editor dismissed for false news on SCAF
The State Council Administrative Court canceled the Shura Council’s decision to dismiss the editor of a state-owned newspaper on Tuesday and ordered that the editor be reinstated. Dozens of journalists from state-owned and privately-owned newspapers gathered at the court today to show solidarity with Al-Gomhurriya Editor-in-Chief Gamal Abdel Rahim. They chanted slogans calling for freedom of the press, and against Shura Council speaker Ahmed Fahmy, who also heads the Supreme Press Council. [Egypt Independent, 11/6/2012]

Egypt to implement capital gains tax on stock exchange
For the first time since Egypt reinstated its Bourse in 1992, the cabinet of Prime Minister Hisham Qandil approved the implementation of a capital gains tax in the stock exchange, Finance minister Momtaz El-Said announced on Wednesday. The tax, which will amount to 10 per cent, will be levied only on the first transactions of any security in the secondary market after the initial public offering is made, El-Said told reporters at a press conference following the cabinet meeting. [Ahram Online, 11/7/2012]

Egypt to sign reduced IMF loan, EBRD to approve financing
Egypt’s negotiations with the International Monetary Fund (IMF) are set to conclude by 15 November and the loan signed by the beginning of January 2013, Egypt’s Finance Minister Momtaz El-Said said on Wednesday. The loan amount, initially set at $4.8 billion was reduced slightly to $4.5 billion, El-Said said to state owned daily Al-Ahram. The European Bank for Reconstruction and Development (EBRD) will decide on a proposal to provide Egypt with financing before the end of November, the bank stated on Monday. [Ahram Online, 11/7/2012]

Govt mulls increasing water prices
The government is considering increasing water prices for homes, industrial and commercial facilities to match the market price, in a bid to eliminate LE5 billion in annual state-provided water subsidies. Mohamed Hassan, the head of the government’s Consumer Protection Agency, said that the increase will be applied gradually over five years. [Egypt Independent, 11/6/2012]

Egypt to increase gas exports to Jordan
The Petroleum Ministry on Tuesday said it is studying an increase in the gas supplies to Jordan as of mid-November. The ministry’s statement came after a meeting in Cairo between Petroleum Minister Osama Kamal and his Jordanian counterpart. The Jordanian authorities said imports of Egyptian natural gas have declined to 16 percent of the 240 million cubic feet a day Egypt is under contract to provide. [AP, Egypt Independent, 11/6/2012]

Doubts cast over military’s ability to fill Sinai security gap
The news follows yet another tumultuous weekend in Sinai, where policemen protested recurring attacks against them at police stations and checkpoints. They demanded better protection and more arms. Policemen have further threatened to block all roads to North Sinai if their demands are not met. For both analysts and the people of Sinai, the army’s involvement in the current security crisis there is a flagrant index of the police failure, but also an index of a deeper coordination problem between different law enforcement entities, including the army. [Egypt Independent, Ahram (Arabic) 11/7/2012]

Brotherhood mobilizes for pro-Sharia Friday, Nour Party refuses
Egypt’s Muslim Brotherhood has called on members and supporters to participate in mass rallies planned for Friday by a number of Islamist parties and groups to demand a constitutional article calling for the application of Islamic Law. Vice-chairman of the Salafist Nour Party Yosri Hammad stated on Wednesday, however, that his party will not be joining Friday’s planned protest on Tahrir Square demanding the implementation of Islamic Sharia law in Egypt’s constitution. "More effort in educating Muslims about the principles of Sharia needs to be exerted so it can be a public demand," Hammad told Al-Ahram Arabic language news website. [Ahram Online, 11/7/2012]

Bishop says police failed to protect church land from Salafi attack
A number of Salafis trespassed onto a plot of land owned by the Shubra al-Kheima archdiocese Monday and turned it into a mosque, Bishop Morcos of Shubra told ONA news agency on Tuesday. The bishop told Al-Masry Al-Youm that the police failed to protect a building and the land belonging to the archdiocese from Salafis who stormed it and performed the morning and evening prayers there, and that the police only showed up the next day. [Egypt Independent, 11/6/2012]

Doctors to hold symbolic funeral for Health Ministry
The doctors’ strike entered its 37th day Tuesday, demanding better salaries, the improvement of the health system and improved hospital security. Protesting doctors said they would organize a march on Thursday from Omar Makram Mosque, near Tahrir Square, to the state television building in Maspero, in a symbolic funeral for the Health Ministry, in which political parties and public figures would participate. [Egypt Independent, 11/6/2012]