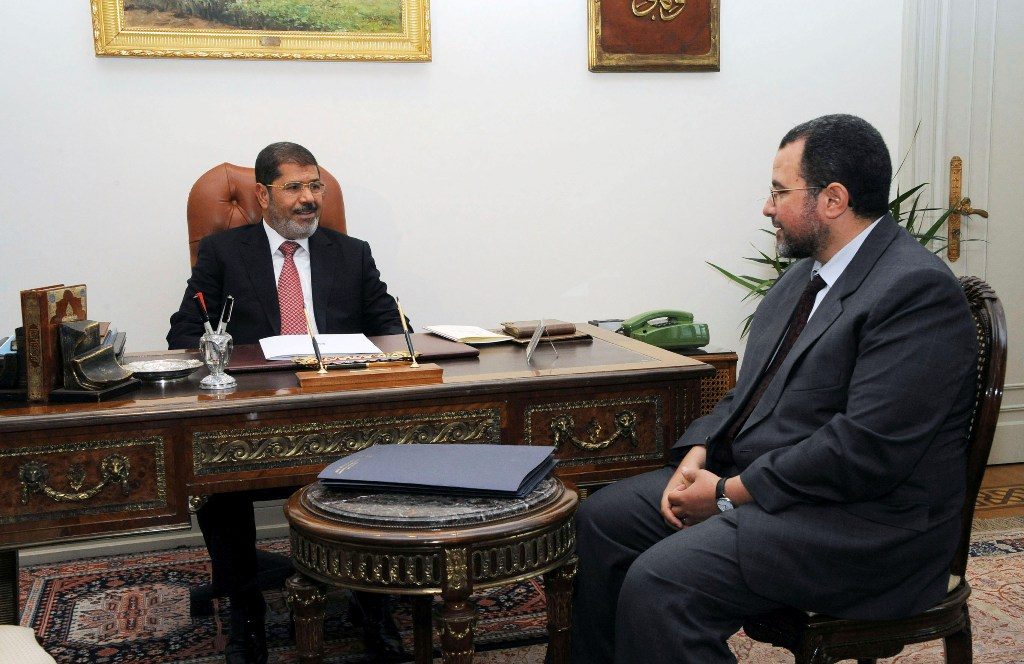 President Mohamed Morsi on Tuesday delegated Prime Minister Hesham Qandil some powers granted by Emergency Law No.162 of 1958 concerning criminal sentencing, the ratification of court rulings and the assignment of judges to examine complaints.

Morsi delegates some emergency powers to Qandil
President Mohamed Morsi on Tuesday delegated Prime Minister Hesham Qandil some powers granted by Emergency Law No.162 of 1958 concerning criminal sentencing, the ratification of court rulings and the assignment of judges to examine complaints. Article 14 of the emergency law grants the president the right to abolish or reduce sentences, or order retrials. Justice Ministry spokesperson Ahmed Roshdi said the powers assigned to Qandil pertain to sentences issued before the termination of the Emergency Law. [Egypt Independent, 11/1/2012]

Cabinet to amend corruption legislation
Prime Minister Hesham Qandil on Thursday asked the Cabinet’s legislative committee to amend anti-corruption legislation to increase penalties against perpetrators, a Cabinet source said. “The committee would develop regulations to end the inheritance of state positions, reduce the number of governmental advisors, and establish oversight bodies to monitor the performance of officials and public companies,” added the source. “The committee would also establish rules for promotions and bonuses.” [Egypt Independent, EGYNews (Arabic), 11/1/2012]

Consensus over constitution approaching 100%, says assembly official
Constituent Assembly Secretary General Amr Darrag has said that consensus over the draft constitution is approaching 100 percent, with only three articles left to be discussed. Darrag also said the Salafis have consented to Article 2 that pertains to Sharia law and Article 219 that complements it. Darrag further said that the international civil society organizations that reviewed the draft said it is modern, balanced and does not contravene freedoms. [Egypt Independent, 11/1/2012]

New draft of the constitution provokes crisis within Constituent Assembly
Another version of the draft constitution was leaked, infuriating some members of the assembly who specifically asked to keep it confidential until amendments were finalized. The new draft included 4 new articles in the chapter on transitional provisions that would ensure parliamentary elections within 60 days after the acceptance of the constitution, the schedule for Senate and Shura elections, the timeline for parliamentary sessions, and term limits. Additional and amended articles addressed the criminalization of sex trafficking and slavery, and a restructuring of the State Litigation Authority. [Ahram (Arabic), 11/2/2012]

Constitution Awareness Campaign: Draft gives the president the right to interfere with the judiciary
A grass-roots campaign to raise awareness of the constitution said that the status and powers of the President of the Republic, which emerged in the last draft constitution on October 24 granted extensive powers to the President, noting that the framers of the constitution were overly influenced by the 1971 constitution. Hassan Kamal, general coordinator of the campaign, explained that many articles provided the president with sweeping powers without judicial or parliamentary oversight. [Shorouk (Arabic), 11/2/2012]

FJP leader: IMF loan approval contingent on adopting party’s economic reforms
A Freedom and Justice Party leader demanded Thursday that the Cabinet adopt the party’s economic reform program in order for it to approve a US$4.8 billion loan currently being negotiated with the IMF. “We require that the economic program proposed by the Cabinet to the IMF be in line with the vision of the [FJP] and its program,” Abdallah Shehata, head of the FJP’s economic committee, told Al-Masry Al-Youm. Former People’s Assembly MP Saber Abouel Fotouh said the FJP would approve the loan if it is “unconditional,” or free from any economic obligations of the Cabinet. He added that the loan should have a stable interest rate. [Egypt Independent, 11/2/2012]

Egypt moves to rein in energy subsidy bill
Egypt has taken a first step to getting expensive energy subsidies under control, a key component of an economic reform programme the cash-strapped government is presenting to the IMF to obtain a loan. The cabinet received on Thursday the preliminary results of a pilot programme to use ration cards to distribute cooking gas to the needy instead of selling it on demand, Petroleum Minister Osama Kamal said. [Ahram Online, Egypt Independent, 11/2/2012]

Former agriculture minister warns against importing US seed potatoes
Former Agriculture Minister Salah Youssef has warned against importing seed potatoes from the United States, as they bear mold structures that do not exist in the ones Egypt imports from Europe. Youssef also said the US banned certain imports from Egypt to pressure it to buy its seed potatoes, but the minister stressed that agreeing to the imports was not in Egypt’s best interest, as it may affect potato exports to Europe, which totaled LE1.2 billion in 2011. [Egypt Independent, 11/1/2012]

Hundreds in Egypt’s Tahrir Square for preliminary Islamist mass demonstration
Hundreds of Islamist supporters gathered in Tahrir Square Friday afternoon for a preliminary demonstration to call for the application of Islamic Sharia law in Egypt’s constitution. A mass rally is scheduled for 9 November by a group of Islamist forces to reinforce their demand. A number of groups headed towards the square, as protesters demand replacing the word "principle" with "provision" in the constitution draft Article 2, which states that the principles of the Islamic Sharia law are the primary source of legislation. [Ahram Online, EGYNews (Arabic), 11/2/2012]

Striking doctors march, but government standing firm
Nearly 1,000 striking doctors escalated their protest by forming a human chain from the Doctors Syndicate to the Health Ministry in downtown Cairo on Thursday, while hundreds of political activists joined them in a show of solidarity. But some observers worry that the strike may need a boost in order to press its demands. The white-coated chain was followed by a march to the Health Ministry. However, riot police had sealed off Maglis al-Shaab Street leading to the ministry, forcing a diversion of the march through side streets to the ministry’s rear entrance. [Egypt Independent, Ahram Online, 11/1/2012]

Song in popular film censored for allegedly insulting Islam
The Culture Ministry confirmed Thursday that it has censored a song in the popular new film “Abdu Mouta” after Islamist groups filed lawsuits against its producer, claiming the song insulted Islam. Censorship Director Abdel Sattar Fathy will watch the film to make sure the offending part of the song is cut out artistically, and write a report of it, said the ministry. [Egypt Independent, 11/2/2012]

Foreign Minister sits with EU representatives
Nazih El-Naggary, spokesman for the Minister of Foreign Affairs Mohammed Amr, confirmed that Prime Minister Hisham Qandil and Foreign Minister Amr sat down with a delegation from the European Union Parliament on Thursday. The group discussed Palestine, tourism, and economic development. Amr asked the EU to work with Israel on ceasing land grabs in the West Bank and Jerusalem. [SIS, DNE, Shorouk (Arabic), 11/2/2012]