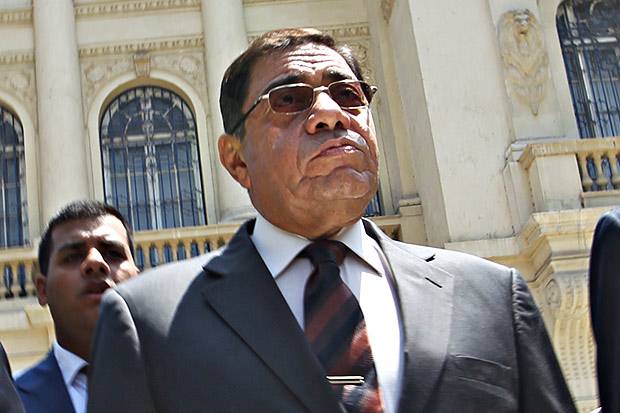 Egypt’s President Mohamed Morsi on Thursday evening removed Mubarak-era Prosecutor General Abdel-Meguid Mahmoud from the post he has held since 2006. Abdel Meguid Mahmoud claimed late on Thursday that despite being fired, he would not leave his post.

Morsi dismisses Mubarak-era prosecutor general Abdel-Meguid Mahmoud
Egypt’s President Mohamed Morsi on Thursday evening removed Mubarak-era Prosecutor General Abdel-Meguid Mahmoud from the post he has held since 2006. The dismissal of Abdel-Meguid has been one of the major demands of pro-revolution forces since the ousting of former president Mubarak in February 2011. Some rights organizations, however, say the dismissal is a blatant violation of the law on judicial authority. [Ahram Online, Shorouk (Arabic), 10/11/2012]

Public prosecutor refuses to leave his position
Public Prosecutor Abdel Meguid Mahmoud claimed late on Thursday that despite being fired, he would not leave his post. Citing the Law on Judicial Authority in his defense, Mahmoud issued the statement in response to this afternoon’s announcement that President Mohamed Morsy would remove him from office and appoint him as ambassador to the Vatican, instead. [Egypt Independent, Ahram (Arabic), 10/11/2012]

Court refers 19 convicts to grand mufti for sentencing recommendation
An Ismailia court referred 19 defendants convicted of murder to Grand Mufti Ali Gomaa Thursday to decide whether they should be sentenced to death. Seventeen of the 19 are fugitives and were convicted in absentia. They were found guilty of killing a man inside a mosque during Ramadan. The court adjourned the case to 10 November to issue the sentences. [Egypt Independent, 10/11/2012]

Egypt’s Brotherhood heads urges jihad for Jerusalem
The supreme guide of the Muslim Brotherhood, from which Egypt’s President Mohamed Morsi emanated, called on Thursday for a jihad (holy war) to liberate Jerusalem from Israeli rule. "Jerusalem is Islamic … and nobody is entitled to make concessions" on the Holy City, said Sheikh Mohammed Badie in his weekly message to supporters. "The jihad for the recovery of Jerusalem is a duty for all Muslims," he said, stressing that the liberation of the Holy City "will not be done through negotiations or at the United Nations." [AFP/Ahram Online, 10/11/2012]

Loan negotiations could conclude by November, says IMF
The International Monetary Fund is optimistic that negotiations for a US$4.8 billion loan to Egypt could conclude by mid-November, said IMF chief Christine Lagarde. “Our mission will return to Egypt in October to continue the fruitful discussions we had with the president, the prime minister and the governor of the Central Bank in August,” Lagarde said Thursday at a conference held in Tokyo. [Egypt Independent, 10/11/2012]

Pro-Brotherhood demonstrators attack ‘Accountability Friday’ protest in Tahrir Square, destroy platform
Clashes have erupted between hundreds of protesters in Tahrir Square after pro-Brotherhood supporters destroyed the stage of Hamdeen Sabbahi’s Popular Current. Ahram Online’s reporter on the ground says a number of people have been injured so far. Supporters of President Mohamed Morsi currently make up the majority of protesters in the square as numbers continue to grow after Friday prayers. Chants condemning the judiciary’s decision to clear 24 former regime officials of orchestrating the Battle of the Camel are ringing out around the square. [Ahram Online, Reuters, Ahram (Arabic), 10/12/2012]

Shater travels to Dubai to address Brotherhood tensions
Muslim Brotherhood leader Khairat al-Shater travelled to the United Arab Emirates on Wednesday to try to resolve tensions between the Emirati foreign minister and the Emirati branch of the Muslim Brotherhood. Brotherhood sources told Al-Masry al-Youm that Shater was also headed to Dubai to hold meetings with businessmen and potential investors there. Shater hopes to strengthen economic relations between the two countries and reach agreements on major projects to be implemented in Egypt, said the sources. [Egypt Independent, 10/12/2012]

$165 Mln Pledge For Fund Backing Arab Democracies
Rich countries and international lenders on Friday promised $165 million to a fund to provide financing for stronger public institutions in Arab nations seeking to establish democracies. The fund aims to help build economic institutions and promote reforms in countries where huge public uprisings ousted autocratic regimes. It is part of the Deauville Partnership that works to underpin democracy and economic reform in countries such as Egypt and Tunisia. [AP, 10/12/2012]