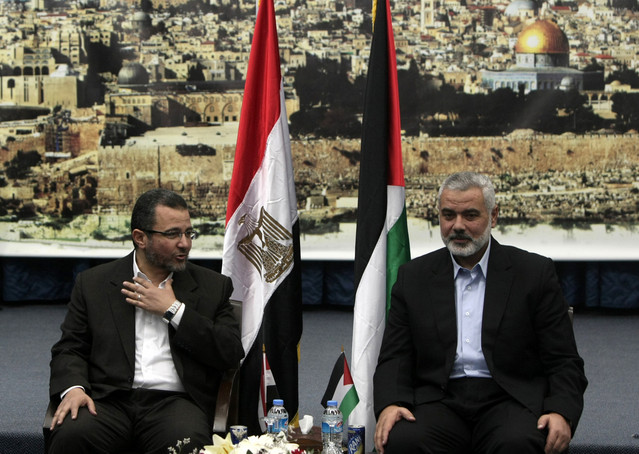 Egypt will continue to support Gaza against continued attacks from Israeli armed forces, President Mohamed Morsy reiterated on Friday. "The price will be high if the aggression continues," Morsy said.

Morsy: Egypt has changed; Israel will pay for Gaza aggression
Egypt will continue to support Gaza against continued attacks from Israeli armed forces, President Mohamed Morsy reiterated on Friday. "The price will be high if the aggression continues," Morsy said after he performed Friday prayers in Fatma Al-Sharbatly Mosque in Cairo’s Fifth Settlement."Egypt is different from yesterday," he added, referring to his predecessor ousted President Hosni Mubarak’s soft stance on the Israel-Palestine conflict. "We assure them [Israel] that the price will be high for continued aggression, and [we tell them] you have to bear the responsibility,” Morsy continued. [Egypt Independent, Ahram Online, EGYNews (Arabic)11/16/2012]

Egypt will intensify efforts to stop aggression in Gaza, says Qandil
Egypt’s premier urged world leaders Friday to stop Israeli "aggression" on Gaza as he visited the Hamas-run enclave and the Jewish state warned of a possible ground offensive, AFP reported.A truce agreed during the brief visit by Prime Minister Hesham Qandil quickly dissolved in violence as what Palestinian security sources said was an Israeli air strike hit northern Gaza, killing two. "What I saw today in Gaza, at the hospital, with the martyrs, cannot be met with silence," Qandil said. "This tragedy should not be met with silence and the whole world should take responsibility to stop the aggression." During Qandil’s visit, there were 13 explosions, 2 deaths and 3 injuries in Gaza.  [Egypt Independent, Ahram Online, DNE, EGYNews (Arabic), Shorouk (Arabic), 11/16/2012]

Ties with Israel will not hinder its support for Gaza: Egypt’s FM
Egypt’s Minister of Foreign Affairs Mohamed Amr stated on Thursday that Egypt has called for an urgent meeting of the Arab Foreign Ministers’ Council to discuss means of supporting the Palestinians. Amr added that the Egyptian delegate within the United Nations is working along with the Security Council to push for an end to the Israeli attack on Gaza. Amr urged the international community to intervene and stop the Israeli violence. "Egypt will cooperate with all international forces to end the bloodshed of Palestinians and to put an end to the Israeli attack," said Amr in a press statement. [Ahram Online, 11/16/2012]

Egypt strikes Ukraine from approved wheat supply list
Egypt, the world’s biggest importer of wheat, will remove Ukraine from its list of suppliers in 2013 after Kiev said it would halt exports from Dec. 1, the government’s main buyer said on Thursday. The decision is bad news for Ukraine, which has angered some of its foreign buyers by sending mixed messages on exports since a drought that decimated this year’s crop, and may mean it struggles to sell to Egypt in the future even when it has available stocks. [Ahram Online, 11/16/2012]

Enough in the Nile to share, little to waste
As Ethiopia’s massive dam-building plans continue to cause disquiet in downstream Egypt, new research suggests there is sufficient water in the Nile for all 10 countries it flows through, and that poverty there could be significantly eased as long as access by small-scale farmers is boosted. [IRIN, 11/16/2012]

No alert in North Sinai, army won’t be dragged in a pre-planned war|
Egyptian armed forces in North Sinai are not on alert and no additional forces have been deployed to border points following the Israeli aggression on Gaza, a military source has told Ahram Online. The source said Sinai was a red line but Egypt would not be dragged into a pre-planned war. The denial came after news reports the Egyptian army was on alert in North Sinai and additional troops were being deployed to border points. [Ahram Online, 11/15/2012]

Thousands in Alexandria protest Israeli assault on Gaza
Thousands have gathered outside the Leader Ibrahim Mosque in Alexandria on Friday to protest against the Israeli assault on the Gaza Strip. Qatar-based satellite channel Al-Jazeera Mubasher Misr broadcast images of protesters raising large banners for Palestinian martyrs who were killed during the attack. The banners read: "Gaza will never die," "We call on the president to open Rafah crossing," and "The Muslim who is not concerned with the affairs of his fellow Muslims is not one of them." [Egypt Independent, 11/16/2012]

Friday’s Tahrir protests denounce Israeli assault on Gaza
Protesters began gathering in Tahrir Square on Friday morning to denounce Israel’s attack on the Gaza Strip.Other protesters have also come to the square to continue demonstrating in favor of a stronger application of Sharia in the new constitution. Amid a notable presence of traffic police, traffic has so far continued to run smoothly around Tahrir and the surrounding streets, including the Corniche and Qasr al-Nil streets.  [Egypt Independent, 11/16/2012]

Qaradawi delivers Al-Azhar’s Friday sermon after decades in exile
Internationally renowned Egyptian Islamic preacher Youssef Qaradawi led Friday’s prayer at Al-Azhar for the first time. "Tens of years I have been preaching in the most prestigious mosques of the world, and it is my first time to give a sermon at Al-Azhar," said Qaradawi who is known to be the spiritual leader of Egypt’s Muslim Brotherhood. During the sermon Qaradawi praised the role of Egypt’s President Mohamed Morsi and the influential Arabian Peninsula state of Qatar for condemning and calling for action against the ongoing attacks in Gaza strip since Wednesday.[Ahram Online, Egypt Independent, 11/16/2012]

Merkel: Egypt must use Hamas influence to calm Gaza tension
German Chancellor Angela Merkel on Friday called on Cairo to use its influence on Hamas to ease tensions in the Gaza Strip as Egyptian Prime Minister Hisham Qandil visited the violence-wracked area. "The federal chancellor calls on the Egyptian government to use its influence on Hamas to push it towards a moderation of the violence," Merkel’s deputy spokesperson Georg Streiter told a regular government news conference. [Egypt Independent, 11/16/2012]

Egypt: Ban Phones Morsi to Discuss Escalation in Gaza
UN Secretary-General Ban Ki-moon spoke on the telephone with President Mohamed Morsi to express his support to Egypt’s efforts to restore calm in the Gaza Strip. In his conversation with Morsi, Ban stressed the need to prevent any further deterioration of the situation and expressed strong support for the leadership being exercised by Egypt to restore calm in the region, according to statement readout from the UN Secretary-General’s spokesperson. [SIS, 11/15/2012]

Putin announces his support for Morsi’s efforts to stop the aggression in Gaza
President Vladimir Putin told Egyptian President Mohamed Mursi in a telephone call that Russia supports Egypt’s efforts to halt the escalating violence in Gaza, the Kremlin said Friday. “The Russian President said that he supports Cairo’s efforts directed at normalizing the situation,” the statement said. “The Russian head of state underlined the need to stop the armed confrontation and called on the sides involved in the conflict to exercise restraint and stop military actions resulting in civilian deaths,” it said. [Shorouk (Arabic), Arabiya/AFP 11/16/2012]

Egyptian FM meets with his Tunisian, Jordanian and British counterparts
Egyptian Foreign Minister Mohamed Kamal Amr warned Thursday evening that Egypt will not allow its relations with Israel to hinder its support for the Palestinian cause. Amr made the comments during a meeting with his Tunisian, Jordanian and British counterparts, to the backdrop of the escalating Israeli military offensive on Gaza, reported state-owned Al-Ahram. Amr condemned Israeli aggression against Palestinian civilians in the Gaza strip, which has continued for three days. [DNE, 11/16/2012]