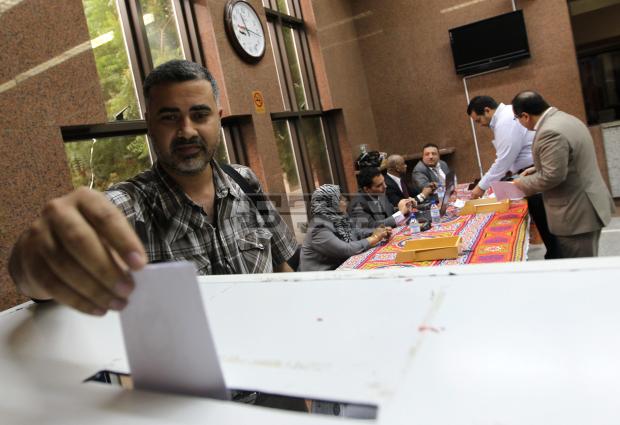 President Mohamed Morsi has issued a law officially dividing the referendum on the constitution into two stages, according to MENA.

Opposition expected to go to army unity talks, delayed
Egypt’s main opposition coalition was expected to attend Wednesday’s unity talks called by the army to help end a political crisis and is discussing the level of representation, a member of the National Salvation Front’s leadership said. "We will be represented. That is the plan so far," Ahmed Said, who is also the head of the liberal Free Egyptians Party, told Reuters. "We are starting a meeting to decide the level of representation," he said shortly before the group convened. The armed forces, however, released a statement on Wednesday saying that a planned meeting aimed at building national dialogue between political forces, which had been called for by the minister of defence, will be postponed for the time being. [Egypt Independent, Ahram Online, Reuters, SIS, EGYNews (Arabic), 12/12/2012]

Morsi allots himself more control over Egypt’s Central Bank
President Morsi is set to issue a modification to two articles in the laws governing the Central Bank of Egypt within days, which grants himself more authority. Notably, the modifications reduce the number of board members and alots the president the right to unilaterally nominate the next CBE governor without the usual recommendations from cabinet. [Ahram Online, Egypt Independent, 12/12/12]

Court says president’s call to referendum not subject to judicial oversight
The administrative court of the State Council issued a ruling on Tuesday saying that annulling the decision to put the draft constitution to referendum is not within the jurisdiction of the judiciary. A lawsuit was filed before the administrative court demanding the cancellation of President Mohamed Morsi’s decision to hold a referendum on the new constitutional draft next Saturday, 15 December. The court said that calling people to referendum was an act of sovereignty, and not subject to judicial oversight. [Egypt Independent, Ahram Online, 12/11/2012]

In another blow to Morsi, court does not recognize prosecutor general
In a new challenge to President Mohamed Morsi, the Azbakiya Misdemeanor Court declined a case because it was referred to the court by the new prosecutor general, saying that he does not legally hold that position. Last month, Morsi triggered controversy by issuing a decree in which he dismissed former Prosecutor General Abdel Meguid Mahmoud and replaced him with Talaat Ibrahim Abdallah. The move was unprecedented in Egyptian legal history, since the constitution has always stipulated that the prosecutor general cannot be fired by the president. [Egypt Independent, 12/11/2012]

Egypt stocks record slight gains despite demos, counter-demos
Egyptian stocks ended in the green on Tuesday, despite predictions by analysts that it would suffer losses due to planned million-man demonstrations and counter-demonstrations in Cairo. Egypt’s benchmark EGX30 index climbed 0.81 per cent to reach 5016 points by the end of Tuesday’s session. The broader-based EGX 70 index, meanwhile, rose by 0.89 percent. [Ahram Online, EGYNews (Arabic), 12/11/2012]

Fitch: IMF delay highlights Egypt implementation challenges
Egypt’s decision to request a postponement of IMF board discussion of its programme to allow time for "social dialogue" on key measures highlights the challenge of implementing tax increases and subsidy cuts in a difficult political environment, Fitch Ratings says. A short postponement of the IMF programme would not have negative rating implications. But if the current political polarisation leads to more significant delays in the political transition and in IMF programme approval, economic and financial pressures are likely to mount and Egypt’s ratings could come under renewed pressure. [Reuters, 12/12/2012]

Egypt divided: The people mobilise for and against referendum
Tens of thousands of Egyptians took to the streets in Cairo on Tuesday to build support for and against the anticipated referendum on the constitution. Ahram Online followed and talked to both sides on a tense evening. [Ahram Online, 12/11/2012]

Govt working with Jordan to halt deportation of illegal Egyptian workers
Minister of Manpower and Emigration Khaled al-Azhari said the deportation of Egyptian laborers in Jordan has been resolved following a phone conversation between President Mohamed Morsi and Jordan’s King Abdullah II on Tuesday. The Jordanian authorities have been cracking down and deporting illegal laborers for what they say are security and economic reasons, and in accordance with labor conventions and laws. [Egypt Independent, 12/12/2012]

Photo: A man casts his vote during the referendum for the Egyptian new constitution, at the Egyptian consulate in Dubai (EPA)