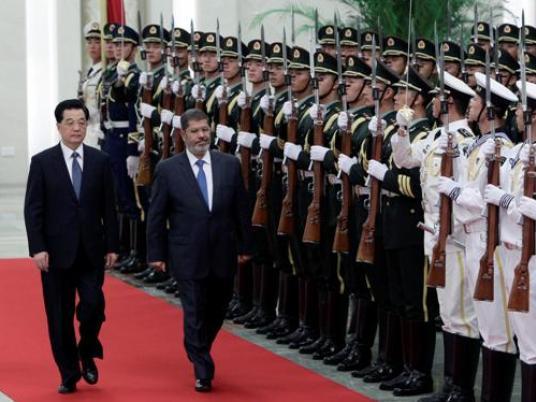 [Egypt Independent, 8/28/2012] A new emergency law is currently being prepared to enable the country’s president to combat thuggery, Justice Minister Ahmed Mekky told Kuwaiti newspaper Al-Jarida in an interview published on Tuesday. According to the new law, the president will be entitled to announce a state of emergency for a week to order the arrest of anyone representing a threat to security, the minister said. He said that the new law would not represent a return to the old emergency law in force under ousted President Hosni Mubarak.

[Ahram Online, 8/27/2012] Shaaban Abdel-Alim, member of the Salafist Nour Party’s higher committee, denied on Monday that talks were underway between his party and the Muslim Brotherhood’s Freedom and Justice Party regarding a proposed alliance in upcoming parliamentary elections. Senior FJP member Mahmoud Amer had previously stated that the FJP had opened negotiations with other parties – mainly the Nour Party – to discuss possible electoral alliances.

[Egypt Independent, 8/28/2012] Court officials on Monday denied rumors that Judge Abdel Moez Ibrahim , the former head of the Cairo Court of Appeals who is accused of allowing employees from civil society organizations to leave the country while still under investgation for receiving illegal funds, hasbeen ordered to appear before the criminal court. “I did not issue any such order,” said Justice Minister Ahmed Mekky, pointing out that investigations into judges are carried out privately by judicial bodies and not the ministry. Mohamed Momtaz, head of the Supreme Council of the Judiciary, also denied that Ibrahim had been referred to court.

[Reuters, 8/28/2012] Egypt’s new president said on Monday he would not impose new taxes or devalue the country’s currency and that his government would rely instead on investment, tourism and exports to fix an economy ravaged by a year and a half of political turmoil. Among measures that have been proposed by economists are a reduction in the value of the currency, which has fallen by only 5 percent over the last 18 months despite the drop in demand from tourists and investors. But asked if his government had any thought of devaluing the Egyptian pound, Mursi said: "No. Definitely not. This is completely out of the question."

[Daily News Egypt, 8/28/2012] The Federation of the Chambers of Commerce (FEDCOC) has adopted an initiative to review the trade agreements signed with Egypt in previous years. The initiative is aimed at seeking methods to derive optimal benefit from the agreements. “We are currently studying the free trade agreements between Egypt and other states, to achieve optimum utilisation,” Ahmed Al Wakeel, Director of FEDCOC, said. Mohamed El Masry, Vice President of the FEDCOC, demanded reviewing the privileges given to foreign partners in the free trade agreements. El Masry stressed that imports have doubled, demonstrating a faulty commercial relationship between Egypt and the foreign states.

[Ahram Online, Reuters, Shorouk (Arabic), 8/28/2012] Presidential spokesperson Yasser Ali says that Egypt’s post-January 25 foreign policy under a new president will be different from that under the Mubarak regime. In a press conference held on Sunday with foreign reporters, Ali stated that President Mohamed Morsi’s visit to China aims at creating opportunities for deepening economic relations between the two countries, while the visit to Iran is to attend the 120-nation Non-Aligned Movement summit to transfer the bloc’s rotating leadership to Iran. President Morsi is heading to China on Monday for a three-day visit, before he heads to Iran on 30 August.

[Egypt Independent, Al Masry Al Youm (Arabic), 8/28/2012] An Egyptian official has said that Cairo will raise the level of its diplomatic representation in Tehran soon. Yousry Abu Sahdy, a member at the Egyptian Council for Foreign Affairs, told Iranian news agency IRNA that Egypt will soon open an embassy in Iran, and added that President Mohamed Morsy and Foreign Minister Mohamed Kamel Amr’s participation in the Non-Aligned Movement’s summit in Tehran, which is scheduled for 30 and 31 August, will strengthen diplomatic and economic ties between both countries. Amr `Izabi, head of the General Authority to Promote Tourism, is among many in the industry actively promoting a direct flight path to Tehran that he says would attract 100,000 tourists annually.

[Egypt Independent, Shorouk (Arabic), 8/28/2012] Cairo and Beijing will sign agreements for seven major projects, including a power station, a desalination plant, industrial bakeries and Internet development, according to Egypt’s assistant planning minister Nabil Abdel Hamid. Egypt will also propose the development of a high-speed train line between Cairo and Alexandria, Hamid told state daily Al-Ahram. Egypt expert Peter Mandaville said Morsy’s visit marked a "broader effort by Egypt to signal that it’s going to diversify its portfolio of relationships." Trade between the two countries reached $8.8 billion last year, up 40 percent from 2008, according to the Chinese Ministry of Commerce.