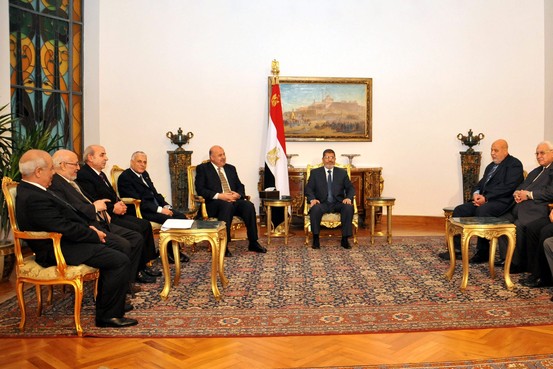 For up to the minute updates from the Tahrir protest today, follow: Ahram Online, Egypt Independent

President Mohamed Morsi is optimistic that Egyptians will overcome the current political instability caused by his recent constitutional declaration, presidential spokesperson Yasser Ali said Monday, as the only woman on the Constituent Assembly’s drafting committee withdrew from the constitution-drafting body.

Morsi ‘optimistic’ about current instability; another Constituent Assembly member resigns
President Mohamed Morsi is optimistic that Egyptians will overcome the current political instability caused by his recent constitutional declaration, presidential spokesperson Yasser Ali said Monday, as the only woman on the Constituent Assembly’s drafting committee withdrew from the constitution-drafting body. He added that the declaration does not mean the president intends to dominate the judiciary. [Egypt Independent, 11/26/2012]

Interior Ministry: Police won’t use force against protesters, but thugs may incite violence
Thugs are likely to infiltrate Tuesday’s protests to incite clashes between demonstrators and police, alleged Interior Minister Ahmed Gamal Eddin on Monday. Leftist forces have called for mass protests in Tahrir Square against President Mohamed Morsi’s recent constitutional declaration, while a rival pro-Morsi rally has been called by the Muslim Brotherhood in front of the Renaissance Monument in Giza. Egypt has arrested 348 people in scuffles between police and protesters, head of Cairo security said on Tuesday, adding that convicts and ex-convicts were among the defendants. [Egypt Independent, Aswat Masriya, 11/27/2012]

ElBaradei warns of civil war risk
In interviews with international and domestic news outlets Al-Dostour Party leader Mohamed ElBaradei has raised the spectre of civil war as a reaction to President Mohamed Morsi’s recent constitutional declaration. “Not even the pharaohs had so much authority, to say nothing of his predecessor Hosni Mubarak,” ElBaradei told German newspaper Der Spiegel. “This is a catastrophe, it a mockery of the revolution that brought him to power.” In the same interview ElBaradei warned that “a civil war threatens to erupt in Egypt.” [DNE, 11/27/2012]

Judges maintain strike, unsatisfied with Morsi’s ‘clarification’
Egypt’s Judges’ Club denounce the president’s office recalcitrance on his Constitutional Declaration and assert they will continue escalating their strike and work to press for the executive to retract his decree. In a statement released on Tuesday the Judges’ Club assert they are struggling to preserve the judicial branch’s independence. [Ahram Online, Egypt Independent, DNE, Shorouk (Arabic), 11/27/2012]

No changes to constitutional decree
Presidential spokesperson Yasser Ali said there would be no amendments to the constitutional decree in a statement Monday night following President Mohamed Morsi meeting with the Supreme Council of the Judiciary. Morsi said he respects and appreciates the judiciary; he assured top judges that their independence would never be compromised.  He has not offered any concessions regarding the constitutional decree, however. [DNE, Ahram Online, 11/27/2012]

IMF spokesperson: loan contingent on implementation of policies
The IMF loan agreement Egypt reached last week with the fund’s delegation has not been directly affected by President Mohamed Morsi’s constitutional declaration increasing his executive and judicial powers, a spokesperson from the IMF told Egypt Independent in a statement on Tuesday. In response to a question on whether the constitutional declaration could call into question the preliminary agreement for a US$4.8 billion, IMF spokesperson Wafa Amr said that the staff-level agreement on financial support from the IMF is based on the economic and social policies that the government plans to implement under its program. [Egypt Independent, Ahram Online, DNE, 11/27/2012]

Egypt considers importing gas from Oman, Guinea
Egypt would consider importing natural gas from Oman and Equitorial Guinea,Petroleum Minister Osama Kamal said on Monday. Kamal told Turkish news agency Anadolu that he discussed this possibility with his counterparts in both countries during the 14th ministerial meeting for gas-exporting countries recently held in Malabo, the capital of Equatorial Guinea.
Egypt imports gas to meet developmental need targets as established by the government, Kamal said, adding that there is a growing need for gas in Egyptian power stations. [Egypt Independent, 11/26/2012]

EU to unfreeze Egyptian, Tunisian assets
The European Union announced Monday it was lifting its asset freeze on Egyptian and Tunisian funds, imposed as sanctions before the countries’ strongmen rulers were ousted in the Arab Spring uprisings. The EU’s council of ministers said it had taken steps to "facilitate the return of misappropriated funds to the Egyptian and Tunisian authorities" now that Egypt’s Hosni Mubarak and Tunisia’s Zine El Abidine Ben Ali had been replaced by elected governments. [Ahram Online, 11/26/2012]

Lawyers, journalists march on Tahrir, Banks
Journalists and lawyers met at their syndicates on Tuesday afternoon to protest President Mohamed Morsi’s constitutional declaration. Journalists chanted “down with the rule of the Brotherhood” in front of the Press Syndicate under signs condemning the president’s constitutional declaration and the freedom of the press restrictions that journalists have complained about over the last few months.[DNE, EGYNews (Arabic), 11/27/2012]

Al-Azhar University students demonstrate in support of Morsi
Hundreds of Al-Azhar University students demonstrated on campus Monday in support of President Mohamed Morsi’s constitutional declaration and his decision to dismiss former Prosecutor General Abdel Meguid Mahmoud. The students demanded the cleansing of the judiciary, the Interior Ministry and the media, and chanted “Egypt is an Islamic state,” while some university professors joined them. Salafi Nour Party spokesperson Nader Bakkar delivered a speech, claiming there is a conspiracy within the judiciary. [Egypt Independent, 11/26/2012]

FM discusses political crisis, Gaza with Clinton
Secretary of State Hillary Clinton spoke with Egyptian Foreign Minister Mohamed Kamel Amr on Monday to underscore US hopes that Egypt’s political crisis can be resolved in a democratic manner, the State Department said. US President Barack Obama has called for political calm in Egypt to peacefully overcome the power struggle between Islamists and opposition that heated up after the announcement of a controversial Constitutional Declaration, White House spokesman Jay Carney said on late Monday. [Egypt Independent, Ahram Online, Reuters, 11/27/2012]

Israeli envoy arrives in Cairo for talks
An Israeli envoy arrived in Cairo on Monday to meet with Egyptian security officials about the Egypt-brokered ceasefire between Israel and Hamas that ended the assault on the Gaza Strip last week. The envoy heads a small delegation which would focus on obstacles to a lasting truce, said a source that received them at the Cairo airport. The source refused to reveal the identity of the envoy, saying only that he is a “security official sent by Israeli Prime Minister Benjamin Netanyahu.” [Egypt Independent, Ahram Online, 11/26/2012]