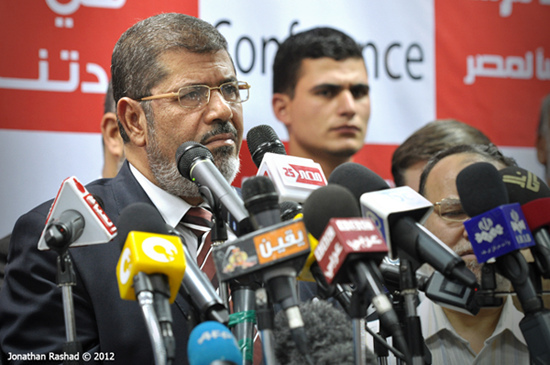 Islamist President Mohamed Morsi told Egyptians on Tuesday that he had been freely elected little more than a year ago and intended to continue to carry out his duties despite mass protests demanding his resignation.

Morsi says he won fair election, will stay on
Islamist President Mohamed Morsi told Egyptians on Tuesday that he had been freely elected little more than a year ago and intended to continue to carry out his duties despite mass protests demanding his resignation. In a televised address to the nation, Morsi warned that the only alternative to respecting the constitutional legitimacy of his presidency was further bloodshed on the streets. [Daily News Egypt, 7/3/2013]

Opposition: Morsi speech declares "civil war"
Egypt’s opposition alliance said President Mohamed Morsi’s refusal on Tuesday to accept a military ultimatum to share power had put the country on course for confrontation and raised the risk of violence. "This is leading to confrontation, not offering any compromise or listening to people on the streets, and we are very alarmed about escalation of violence," said Khaled Dawoud, spokesman for the National Salvation Front. He added,  "This is an open call for civil war … The president continues to deny the demands of the Egyptian people that he resign." [Aswat Masriya, 7/2/2013]

NSF calls on army to intervene; Tamarod urges Guard to arrest Morsi
The National Salvation Front (NSF) and Tamarod movement called on the armed forces to protect the Egyptian people from "brute" aggression and prevent bloodshed on Wednesday. Tamarod also called on President Mohamed Morsi’s military guard on Wednesday to arrest him, while al-Dostor appealed to the armed forces to act to save Egyptian lives, saying Morsi had "lost his mind" and incited civil war. [DNE, Reuters, EGYNews (Arabic), Ahram Online, 7/3/2013]

Interior ministry besieged by hundreds of armed men
The interior ministry complex was surrounded by a group of several hundred heavily armed men, forcing its closure on Tuesday. There was speculation that because of the strength of their weaponry and vehicles, the attackers may have come from Zintan or from a brigade that identifies itself with the town. An interior ministry source said the group was demanding the resignation of the minister because of the government’s reliance on some militias for security, but this could not immediately be verified. [Libya Herald, 7/2/13]

Car blast hits army checkpoint in Benghazi
At least seven people—four soldiers and three civilians—have been wounded in Libya’s eastern city of Benghazi when a car bomb exploded at a checkpoint manned by special military forces, according to Reuters. Libyan authorities, who are struggling to form a professional army and police, regularly use former rebels to secure the borders or to intervene in tribal conflicts. [Al Jazeera, 7/3/13]

Rumor of UK troop deployment quashed
The British government has strenuously denied claims made by a British newspaper that hundreds of soldiers are to be deployed in Libya to tackle extremists in the country. The United Kingdom has offered to train some 2,000 Libyan soldiers, responding to a request from the Libyan government. However, the British said today, "There are no plans to conduct this training in Libya." The UK was one of four countries to offer training, to support the Libyan government in its efforts to integrate militias into the national army. [Libya Herald, 7/2/13]

Libyan official warns disruptions damaging oil sector
Incessant disruptions to Libya’s oil sector risk crippling the North African country’s economic lifeline and choking off state revenues, the head of a parliamentary committee overseeing the energy industry warned on Tuesday. In the past week, new protests have shut down several Libyan oilfields, cutting output by around a third, as the country’s new rulers struggle to maintain stability in an industry that accounts for 95 percent of state revenues. [Reuters, 7/2/13]

Ban Ki-Moon urges both sides in Homs battle not to harm civilians
With the government push against the besieged rebel-held central city of Homs in its fourth day, United Nations Secretary General Ban Ki-moon urged both sides to avoid harming civilians. Some 2,500 civilians remain in Homs, Ban Ki-moon said. He called on both sides to allow them to leave "without fear of persecution" and called "on the warring sides to do their utmost to avoid civilian casualties and to allow humanitarian access." [Daily Star, 7/3/2013]

Syrian troops battle to retake rebel-held areas
Syrian government aircraft scattered leaflets over the northern province of Idlib on Wednesday, calling on rebels to hand themselves over and urging foreign fighters to return to their homelands, as regime troops pressed on with the battle to retake areas they had lost to the opposition. The call came after another bloody day in Syria. The Syrian Observatory for Human Rights said forty civilians and seventy fighters—both regime troops and rebels—were killed in clashes nationwide on Tuesday. [Daily Star/AP, 7/3/2013]

Army shelling kills fourteen near Damascus
At least fourteen people were killed in army shelling on a rebel village near Damascus on Tuesday, the Syrian Observatory for Human Rights said. The shelling of Kafr Batna in the Eastern Ghouta area east of Damascus, home to several rebel bastions, comes a day after a powerful car bomb rocked the district of Kafr Sousa in southwest Damascus. [NOW/AFP, 7/2/2013]

Activists call for greater protection of women’s rights in draft constitution
Some Tunisian civil society organizations are claiming that the draft constitution being debated by the National Constituent Assembly highlights the government’s unwillingness to enforce gender equality. Women’s rights groups fear the infringement of the state on women’s dignity and the use of Islam to open the door to discrimination. [Tunisia Live, 7/2/2013]

Renewable energy providers eye Tunisia, but laws stand in the way
President Moncef Marzouki’s pledge last week to amend Tunisia’s energy policy was applauded by the private sector, which hopes for the rewriting of laws and regulations hampering renewable energy projects under the previous regime. The government’s plan to present an outline for a national energy roadmap through 2030 to the National Constituent Assembly by October 2013 has inspired hope in making solar and wind power a significant part of Tunisia’s energy sector. [Tunisia Live, 7/2/2013]

GPC, Islah, and Nobel laureate Tawakkol Karman react to protests in Egypt
Sultan al-Barakani from the General People’s Congress (GPC) claimed that the Islah party will struggle as a result of its reliance on the Muslim Brotherhood. "What prevents the progressive movements such as the GPC and the youth from rising up and telling Islah to leave as the Egyptians did with the Muslim Brotherhood? I predict this will happen in Libya, Tunisia, and Yemen," he added. Tawakkol Karman, a member of Islah, was called a traitor by some members of the party for criticizing the Morsi regime. The head of the Islah bloc in parliament, Zaid al-Shami, said that Egypt will find its path and there is no fear for its future, regardless of what happens to Morsi. He argues, however, that those who lost in 2011 are using desperate attempts without building a state of institutions. [Al Motamar, Egypt Independent, Islah Net, 7/3/2013]

Yemen’s main crude pipeline repaired after blast – officials
Yemen’s main oil pipeline has been repaired and crude is again flowing to the export terminal on the Red Sea after tribesmen blew part of it up on Sunday, Yemeni security and oil officials said on Wednesday. Angry tribesmen blew up the pipeline on Sunday in the latest of a series of attacks on the government’s main source of foreign currency earnings. [Reuters, 7/3/2013]

Invoking controversial publications law, Jordan blocks more news websites
The Jordanian government said on Tuesday that it had blocked 254 unlicensed news websites, sixteen of them in the previous two days, using powers under a 2012 law criticized as a threat to freedom of expression. Fayez Shawabkeh, head of the Press and Publication Department, said the local news sites were blocked "after carefully examining their situation." Journalists accuse the government of seeking to control who can publish news. [Middle East Online, 7/2/2013]